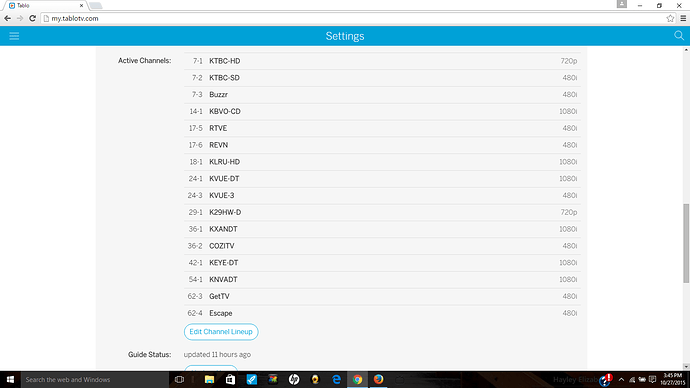 I appreciate how helpful you are on the forums, but I’m not sure I see the purpose of creating an entirely new thread for this picture. It might be more helpful to give a link to TVFool.com, but then again I think Tablo has already written a blog post on how to find TV stations in your area.

At least now it shows what a difference an antenna makes. I often mention tvfool.com. I’ve started showing people at work all the stations, and some of them, including 7-3 and 36-2 are not currently on cable, but most likely will be when retransmission fees are set.

Thanks Beastman. Interesting to know about these upcoming stations. I had not heard about them. I see GetTV and escape show up on your listing. I can barely get those stations. Hopefully the new ones will have a wider coverage area.

I live near Rundburg and North Lamar near the YMCA. You need a VHF antenna for 62 which is in Killeen and is broadcast on VHF 13.

Just noticed that thanks to Tablo, 18-2 and 18-3 were missing. I just added them. It seems Tablo only automatically selects 1080i, and a 720 or 480, EVEN in it has 5 green circles is IGNORED until you manually select it. @TabloTV anyway that can be changed? Is the language in the broadcast information? If so, it would be nice to be able to select English only (and other languages only) for those that only want specific language recordings. I manually deselect anything but English, and all infomercial stations. That is why there are some -4 and -5 and no -1 stations listed.

@beastman - Are the ignored channels lower quality versions of one that is available in higher definition? This is what’s supposed to happen. For example there are two Fox stations, one is in HD, the other SD. It will auto select the HD one.

@TabloTV They are 480i and are all different stations. Only the 1080 are automatically selected.

I have some low power stations near me that only broadcast in 480 that are unchecked by default after the channel scan. Also, I have stations that send auxiliary channels in lower quality that are not merely duplicates of the HD main channel that are also unchecked by default. Looks to me like it’s just skipping all the channels below some minimum resolution as the default behavior.

Not a huge deal, but I do have to pay attention when I do a re-scan otherwise I will have channels dropped from my lineup. If I lived in a larger metro with more channels it would be more cumbersome.

@TabloTV They are 480i and are all different stations. Only the 1080 are automatically selected.

I suppose that makes sense given our channel lineup here in Canada as we don’t have all the fun subchannels you guys do. We should probably amend that given the number of these channels popping up for our US customers though.

Does that mean you will? Maybe a Canadian model and a US model.

Meh - not worth doing different models… Will just put a request into the dev team to tweak the logic they use for what things get auto checked.

Was just putting something together to show a coworker, and noticed 54-3 is also coming. Only 36-3 is within 2 weeks.

Beastman, keep us informed on the new channels coming up. I live south and get Comet and Antenna TV so I wasn’t upset about 42 not adding it.

My own guess is QUBO and ION LIFE, based on them being on http://iontelevision.com on the bottom of the page and 36, 14, 54 all having same ownership. Nothing from my contact yet.

Not the networks I wanted. If they pop up they’ll be deleted.

How do you “just add” a channel - I must have been napping when this was presented.