No surround through Tablo, ROKU and Samsung QLED?

I’m trying to set up my Netflix and other content to play in 5.1 surround. I’m connecting Tablo through a ROKU Premier (4K), then to my Samsung QLED (2020), then optical TV output to my old Yamaha receiver that takes only Pro Logic, Pro Logic II or Neo6 (whatever that is). I get only center and L/R surround channels on Netflix. Using my Samsung 4K DVD player Netflix app to feed Netflix into the receiver via optical cable works OK, 5.1.

Do you have surround sound turned on in the Tablo settings?

What is the make and model of your receiver?

Tablo 5.1 audio is AC3 (Dolby Digitial) so it can be passed through over optical but maybe your receiver doesn’t support DD. Or the Samsung TV is not passing through the AC3 audio. It could be decoding if and sending PCM audio to the receiver.

Surround Sound Supported Devices As long as your Tablo is using version 2.2.22 (or higher) of the Tablo firmware, you will be able to turn on the Surround Sound quality in the Settings screen of th... 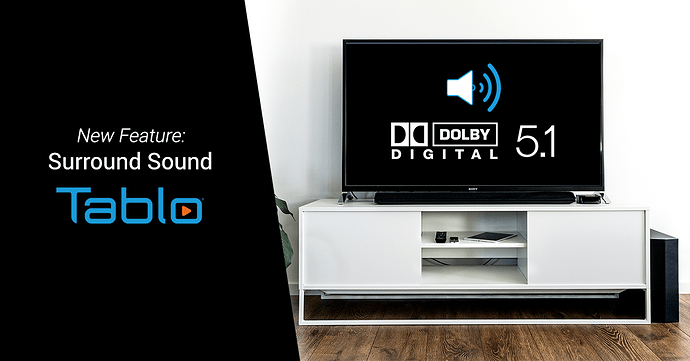 Running through my very old Yamaha RX-V2600 test setup, I got no response from the L/R front channels, so I assumed the amps were bad even though a double amp failure would be very coincidental. Then it hit me - my speaker set A/B switch was somehow inadvertently switched to B so all audio was going to unconnected speaker B terminals, including the test audio tones. Switched it back and all is well - getting surround through the Tablo, Roku, the TV (Samsung Q70R 4K 2020) optical out and the receiver. This receiver is so old that it’s practically coal-fired, and has some input types that no longer exist. But it seems to do the job, including decoding whatever Netflix is putting out these days. I’m an electrical engineer and the GUI setup is almost too much for me to handle, but as long as it’s working I’m going to keep using it. Anyway, thanks for your input. It’s hard to fix user stupid.

If it doesn’t have tubes, it’s new.

Even with S-video inputs?