For over a year I’ve had NBC nightly news scheduled to record. Sporadically there are no episodes to watch and I can’t figure out why. It’s come to a head recently with family members asking me to figure out why it won’t record sometimes

Its set to record ALL episodes (I was worried some would be miscatagorized as ‘reruns’ ) - this didn’t help. I have 4-tuner model - I’ve checked scheduled Scheduled -> Conflicts and the page is always blank.

One question - here is a screenshot from Chrome browser on desktop computer, why are some “REC” indicators blue and others orange? Is this meaningful in any way? 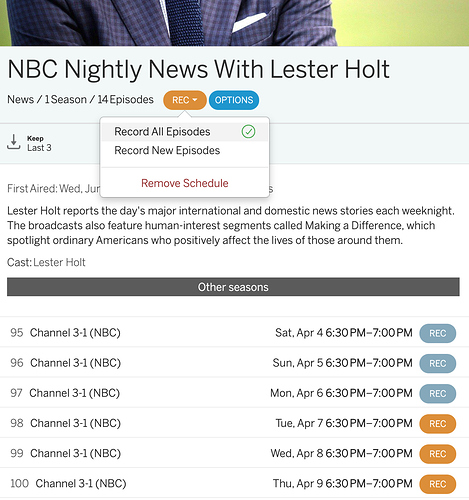 Under your main settings do you have do not record duplicates turned on?

Thanks, “Don’t Record Duplicates” WAS checked - I unchecked it. I didn’t know about that setting.

That said, isn’t that what “Record ALL EPISODES” is for? Those “REC” indicators are still Blue for the next three days.

I recorded the nightly news twice.

Once using the usual method and second by setting a “manual” recording for that time slot and channel.

I had to do that with nightly news for awhile, then it mysteriously started working again.

I also record ALL of the nightly talk shows - Kimmel, Colbert, Fallon, Meyers, Corden - and I often have this nagging feeling that some/all of them didn’t record when I go to look for new episodes and there are none. I wonder if I should manually schedule everything. But the news I know occurs every night, and its not recording consistently.

Once you’ve unchecked that settings, go back to your show and hit Remove Schedule and then go back and check Record All Episodes.

Is everything selected now?

I updated the guide to try and coax the schedule to record the next three days. Once the guide update was complete all of the “REC” indicators are Orange now.

This may address a number of complaints I’ve had about Tablo sporadically not recording these daily shows. Thanks everyone!

I think if the show does not have episode numbers then Tablo sees them all as the same episode so that is why it would not record because it sees it as a duplicate.
The New vs all is saying if it will record all episodes or only those with the new tag next to them. I run into a problem with this on one of the shows I watch as it does not say which shows are new so I have to have it set to record all in able to get the new ones.

If you un-check Keep Last 3 – will it schedule more than three? Or, do you have to already deleted three to make room for three more. I’ve not used that option to know which direction it works… I’d have thought it’d record a new one and kick the old one off. But tablo’s way of doing things, well to be fair there are no standards or conventions.

I have never used it either but I would think it would record another and kick the old one off.

Although that sound sensible, it may wait until you watch and decide yourself to delete one.

There are a few things tablo does, often users find a bit screwy.

I still have “Don’t Record Duplicates” unchecked but today 12/2/2020 it failed to record NBC nightly news. I checked Scheduled -> Conflicts don’t see anything right now, not sure about the past. Recordings -> Failed doesn’t show anything either.

Yes the Ravens vs Steelers game was played today.