I have The National scheduled to be recorded every night but it is being recorded twice. Once at 10pm and again at 2am. How can this be avoided without a manual recording? 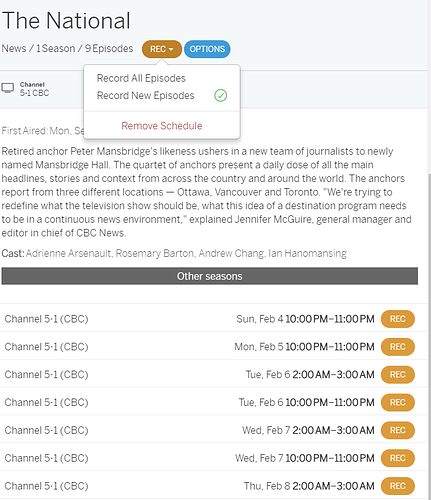 Is this what the scheduled recordings looks like with the don’t record duplicates option turned on?

correct. i have that option checked.

Probably going to have to ask tablo support. Episodes that show up under the OTHER tab normally don’t have episode numbers. So don’t record dups has no affect.

But they also normally aren’t new and yours don’t appear to have the NEW icon. I have 4 late night talk shows which have all of their episodes for the next 14 days listed under “Other” - no NEW and they aren’t marked to record.

It’s hard to believe all of those late night shows have no new episodes over the next two weeks. Time to check titantv.

I have exactly the same problem. There is no solution when I asked. All you can do is use the new “limit recordings option” and auto-delete shows after, say 5. Then just learn to live with the extra recordings. 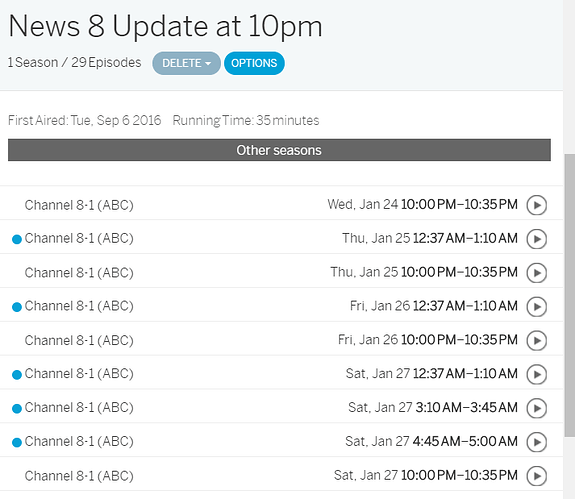 I have not yet implemented the series limits option again after the SNAFUs in beta testing.

I have The National scheduled to be recorded every night but it is being recorded twice.

Can you go into the 10PM, and 2AM program descriptions to see if they show season, and episode numbers?
If they don’t, then it’s a guide data problem, cuz the Tablo software uses the guide meta data from their guide data provider to decide what is new, and what’s a duplicate.

If I remember correctly awhile back the actual individual news shows showed up as individual shows across days. This caused extra scheduling work, etc.

Then they smashed all the common news programing( channel 10 5PM all days) into a common show. But I never remember they ever had season and episode numbers.

But I never remember they ever had season and episode numbers.

I thought my local news shows had season, and episode numbers, but they don’t.
Doh!
However, they do title themselves to include the time, like ‘Action News at 5am’, and ‘Action News at 5:30am’.

The 2AM recording always says “First aired the day before”. Should that not be enough info to fix this issue?