New user here with a Tablo Dual Lite connected to my home wifi via the wifi.

I picked up the unit hoping this would become my new home DVR to record over the air shows.

My original setup seemed to go okay. Got it up and running and it immediate did a update to the firmware last week. I am in a location where I do not get all of the channels in my city so my reception is spotty.

Question 1: Most of my recordings only record in short segments of 2 mins 6 or 7 mins. I have got 3 programs that recorded fully and the rest are either in segments or the video is not found on the DVR when i go to play them.

Is this mostly due to bad TV OTA reception? The programs that I have recorded in full are the local NBC and it’s subchannels. All the other channels are orange spotty reception besides the spanish/junk channels.

Question 2: Randomly the Tablo loses connection to the wifi. I’ll be watching or messing with the menu on my android phone and while setting some shows to record, it will say connecting to tablo.

Question 3: Some of my recording show up as not recorded bc the tuner was in use but there was no tuner being used at that time. Is this another sign that the signal was bad and the tuner was not able to receive the channels as it was trying to record?

Strangely, the Tablo doesn’t get some of the local channel that my old Plasma TV tuner will pick up while connected to the same antenna. Is Tablo’s tuner weaker than some older digial TV tuner? Is there a way to strengthen the signal?

Thank you all for any help. Sorry to be a newb here asking so many questions. I was hoping this would be the answer to my DVR needs without having to try the complicated HDhomerun setup or the costly new gear from Amazon’s Fire Recast Recorder which was not reviewed all that well.
Have not bought the lifetime pass yet. This tablo may have to go back if I can’t pick up more channels.

Welcome to the forums and Tablo ownership!

The challenge may be how to improve it. The Tablo does have an internal splitter but to help compensate it also as an internal amplifier. Having said that, you may need to try a pre-amp between your antenna and the Tablo.

Others here are more knowledgeable than I as far as antennas and pre-amps so it might be useful if you provide your zip code and what antenna you are currently using so that others can look at the details for your situation and provide some guidance.

I no I didn’t directly answer all of your questions but most of your issues seem to be related to your reception.

I appreciate the welcome and the help.

My Zipcode is 89148 and I’m using a RCA attic/outdoor I picked up from Walmart. It’s looking out the window of my south facing window in upstairs bedroom and if I get this working okay, it will go on my Sat Dish pole eventually if I find a neighbor with a long enough ladder.

I’m picking up channel 3 KSNV fine but I don’t get the KLAS, KTNV, PBS local and barely Fox with my Tablo. My 15 yr old Tv get KSNV, FOX and Klas with slight artifacts and some times PBS but rarely KTNV.

Aren’t some/most of the stations you can’t get hi-vhf. Did you buy an antenna designed for VHF reception.

Depending on distance most VHF might require not only an antenna designed for VHF but also an amplifier.

This is the antenna that I got from Walmart in store. 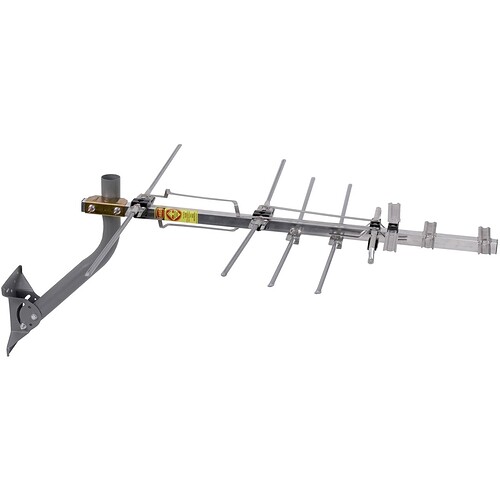 I thought it was just like this one on Amazon.

Size:70 Mile Range Get superior reception without the whole neighborhood noticing. This compact outdoor antenna is designed to maximize signal reception and integrate seamlessly into any home environment,...

I’ve been looking on the reivews at Amazon and some say it doesn’t pick up hi-vhf very well. Anyone have a recommendation for hi vhf antenna?

Am considering now trying HDHomerun to see if they have a better tuner reception at my house. Anyone know if they have a stronger receiver vs the Tablo Dual Lite?

The good news - most of the major networks on the mountain in Henderson, so if you point the antenna in that direction, you should get a majority of the channels. Your antenna has VHF elements (VHF-High), so you should be able to pickup all the channels in the SE part of town.

You may have to do “manual fine tuning” of the antenna (moving the direction it is pointing) to get the maximum results. Verify that it is pointing in the general direction with a compass (most phones have an app), and then fine tune it to get the best results.