An update to Tablo’s Roku channel is on the way.

If you’ve already got the Tablo channel installed, and your ROKU is set to automatic updates, you should see version 2.19.0 very soon. 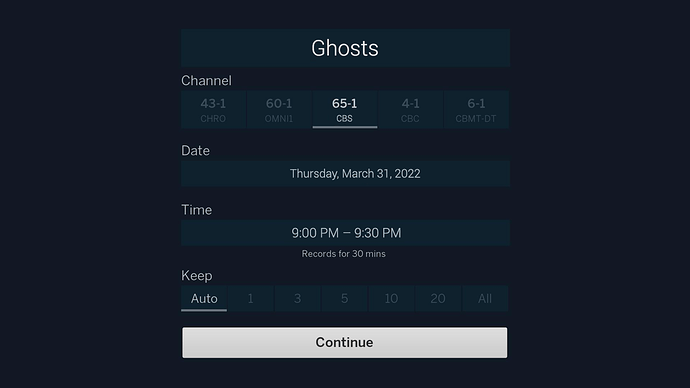 
About This Release
A separate Roku OS 11 update is coming soon which does contain some visual changes to the Roku player software. We believe this Tablo Channel update should ensure all of our visual overlays – like Automatic Commercial Skip segment markers – will be in the right spots once Roku OS 11 arrives, but if you spot anything else out of the ordinary once your Roku updates to OS 11, please let us know.

The change to manual recordings will only be visible to those who don’t have an active TV Guide Data Service subscription.


If you have any questions or feedback about this update, don’t hesitate to drop us a line or comment below.

If the program was already being watched and thus on the disk (for rewind)…will the one-time manual recording catch it from the beginning or just start recording at the time it is set?

will the one-time manual recording catch it from the beginning or just start recording at the time it is set?

It will begin from the time it’s set. We currently don’t have a way to gather up the previous segments stored in the buffer to append to the recording.

Still no Tablo Connect for Roku? sigh
I love my Roku and it’s my device of choice, but I have to use a Fire TV device for Tablo Connect (yes, I could use Google/Android TV or Apple TV, but not Roku). I have two locations I manage in town, and put up a really good antenna one (the easier one, of course), and use Tablo Connect to watch TV at both houses. But not on my Roku. Should I stop holding out hope for that in a future update?

What is a Tablo Roku channel?

I have Tablo “channel” installed on my Roku to watch/record OTA broadcasts.

My Roku has a Roku channel on which I can watch live, non OTA broadcasts.

Since the Roku channel is not an OTA broadcast, how would I record it using Tablo?

Same wording they have used in all their previous announcements for new version of the Tablo Roku Channel.

I’m gonna blame Roku for calling their apps ‘channels’ and then subsequently launching an OTT service called ‘The Roku Channel’.

@TabloTV, not saying you don’t have a point with regards to Roku naming, just make sure your sword cuts both ways, you know?

It does. The argument could be made that we could/should just start calling it the Tablo Roku app. Just seems weird to change it after we’ve been using this language for almost 8 years now.

I was mainly pointing out Nuvyyo’s horrible product naming.

What’s a Tablo? Not an easy question to answer now.

Roku calling their apps “channels” perhaps made marketing sense at the time, since OTT video was so new and live streams were rare, but now it’s confusing, especially now with “The Roku Channel” Roku channel.

I was mainly pointing out Nuvyyo’s horrible product naming.

What’s a Tablo? Not an easy question to answer now.

How so? Sure not all of the Tablo DVRs are headless now, but does that make much difference?

They are all very different now, with regards to features. It’s not an easy explain anymore. But, your response does support the stance. Worthy of its own thread for discussion.

It’s fine. It was the first announcement pertaining to the subject that I’ve seen and I hadn’t had my coffee yet.

For a few seconds I envisioned a way to record live Roku Channel content but I understand that would need to be Cloud based and initiated by Roku, similar to saving Philo content.

Will we ever get some type of priority settings to resolve scheduling conflicts?

I’d also love to see the “fast live tv startup” actually be fast. BTW: why would anyone ever turn that off? Do we really need that as an option?

There are other tablo apps besides the roku app. maybe certain system settings work better in those apps.

Yes, the Roku app needs to at least come up to parity with the Fire Stick when it comes to conflict resolution. Being able to set scheduling priorities like ReplayTV and TiVo had would be a dream come true.

Fire Sticks are not very expensive. Why not just use a Fire Stick instead of a Roku.

Amen to that. I Sooooooo miss my Replaytv.

I have a Fire Stick; It is slow, I have to reboot it at least once a week because it hangs, it doesn’t have an app I use, and I don’t like the UI compared to my Ultra.