A new update to Tablo’s app for Apple TV is on the way.

Your Apple TV should update automatically in the coming day or so, but you can check the Apple App store for the update now. 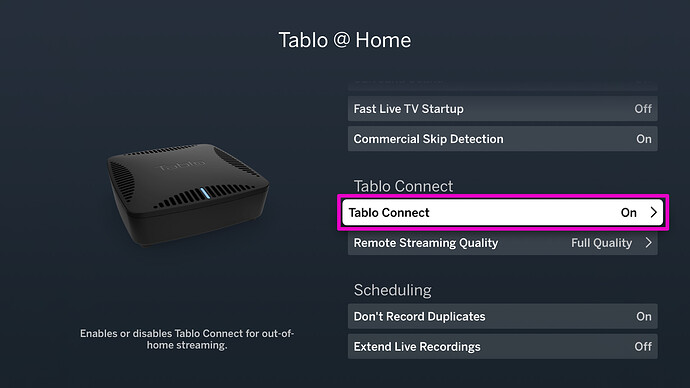 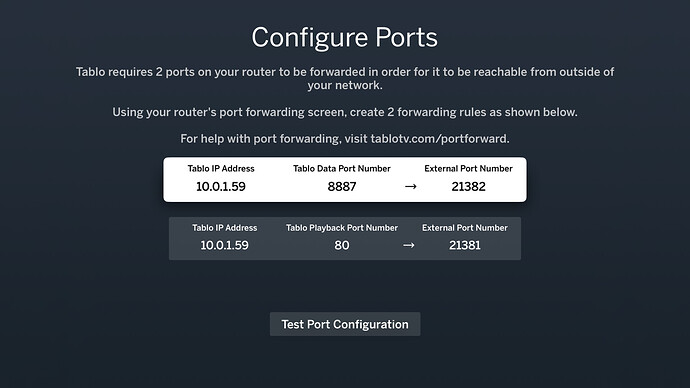 NOTE - Using Tablo Connect (aka out-of-home streaming) via Apple TV requires that your Tablo is running the latest 2.2.36 firmware.

In order for your Apple TV to be able to access your Tablo remotely, please reboot your Apple TV AFTER the firmware and app updates but BEFORE you take the Apple TV away from your home network.

If you have any questions or feedback about this update, don’t hesitate to drop us a line or comment below.

Also… A note for Roku fans:

Now that out-of-home streaming via Tablo Connect is available on Apple TV, folks who watch Tablo via Roku are likely wondering when they can expect this feature.

While the release of the latest Tablo firmware (2.2.36) means we’ve taken a HUGE step closer to enabling Tablo Connect on Roku, it won’t be coming to that platform immediately.

There are so many variables at play when it comes to accessing a Tablo remotely that it’s very difficult to test all potential setups via our internal Quality Assurance and external beta teams. As such, we’d like to monitor things for a few months to ensure the underlying technology is working as intended via Apple TV before completing the remaining work on the Roku app which has a much larger user base.

When we are ready to launch Tablo Connect via Roku, we’ll be sure to let you know. Thanks for your patience!

Does this update fix the issue of recordings jumping back to the beginning of playback?

I have the same question, using a Tablo and Apple TV is almost an unusable combination.

I am a SnowBird with Tablos in two homes. I have updated the tablos to the latest, and updated local home’s Apple TV Tablo App. But the Apple TV Tablo App does not seem to know about my Remote Tablo. How do I tell it to find it.

Does this update fix the issue of recordings jumping back to the beginning of playback?

To confirm, you’re seeing this on in-progress recordings? Not completed ones?

When this happens next, make a note of the following things and let us know:

the Apple TV Tablo App does not seem to know about my Remote Tablo. How do I tell it to find it.

Since Tablo Connect is new on Apple TV, you’ll need to connect to the remote Tablo with your Apple TV on its home network before you can see it while you’re away.

It can see your local one because it’s on the same network. But it doesn’t know yet how to ‘find’ your other Tablo, because it hasn’t seen it before and been told to remember it.

Thanks, that is what I thought, as it is much like using an iPhone or iPad that first needs to have a local experience with a Tablo. Not sure how many folks are going to be traveling with Apple TV’s or Roku’s.

Not sure how many folks are going to be traveling with Apple TV’s or Roku’s.

Hello, I have provided several emails to support regarding this issue and a potential method on how to replicate what I and others are seeing.

@Steven_K Does this update fix the issue of recordings jumping back to the beginning of playback?

The questions asked by @TabloTV seem to be pointing to #1? I’ve seen both issues.

Answers:
1A) N/A, I only attempted to rewind the current live program
1B) Seen most frequently on WHO, but sometimes KCCI
1C) Was watching anywhere from 15-45 minutes, but I didn’t necessarily pause
1D) Yes, “more than one program” is almost guaranteed to be the problematic situation, frequently if I recorded the program that was on when I turned on the Tablo

2A) N/A, I have not paused
2B) Observed on recordings from WHO and KDSM
2C) Can be anywhere from five to 15 minutes (or more) into the program, but I didn’t pause, I didn’t even touch the Apple TV remote
2D) N/A, this is a finished recording

Is there any chance to volunteer to have our Tablo set to debug logging?

Has anyone verified if this works? I tried to test it at home by connecting my apple tv to a cell phone hotspot. It would connect, bring up the guide and allow me to tune to a channel, but wouldn’t play. I would get a still image from the current broadcast, and the spinning wheel would just keep spinning. Eventually the still image might change to a newer still image, but no video or audio.

I did a speed test and had 50 Mpbs down on the apple tv through my hotspot, and I have 50 Mpbs upload on the tablo, so speed isn’t the issue. I also tried the remote streaming quality from the lowest to the highest speeds.

@mrgrossm - Can you try rebooting your Apple TV and give it another shot?

Already rebooted both the apple tv and the tablo itself, no changes.

I do know the that the out of home streaming does work on other devices, I tried it on the phone I was using as a hotspot.