I got a “preview” box / product this morning, will be available (in store) at Best Buy, no later than the 11th. Amazon orders are supposed to be delivered by the 11th for Prime. I had pre-ordered two of the Premiere + devices last week, so this will be a gift for somebody, after I’ve set it up and run it through the paces. 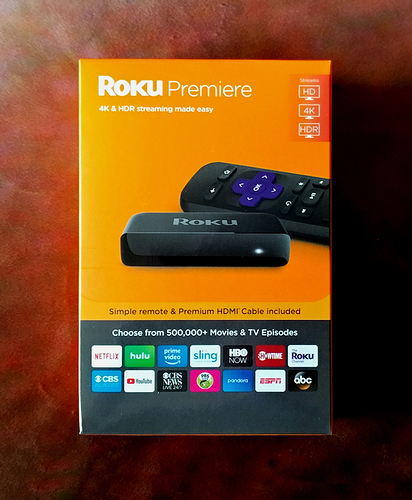 I know very little about Roku. Replaced a Roku 3 with an Ultra about a year or so ago, had problems with long wait times for channel load, until I loaded a micro SD card. My greatest area of concern and curiosity is whether or not they’ve increased the internal storage over the years.

If it turns out to the be same, I’ll probably end up replacing my pre-order with Ultras. Anyone have an inkling as to how much internal these may have? I’m told the old Roku 3 was 256 MB, don’t know what the (older) Ultra is.

Roku players, branded simply as Roku (/ˈroʊkuː/ ROH-koo), are a series of digital media players manufactured by Roku, Inc. Roku partners provide over-the-top content in the form of channels. The name comes from the Japanese word 六 (roku) meaning "six" and was named so because it was the sixth company that Anthony Wood (founder and CEO since 2002) started. A Roku streaming device receives data (the video stream) via a wired or Wi-Fi connection from an Internet router. The data is output via Progr...

I set this preview unit up with 65 channels. No buffering, no waiting, everything loads instantly. When changing themes, wait / lag is about 5 seconds, about the same as what I’d experienced on my Ultra. I was worried about having no slot for micro SD, evidently, will not be necessary at all. Overall, when considering price to performance ratio, the new inexpensive Premiere product is fantastic.

Saw these on the shelf in a Walmart today.

Don’t most routers that support 802.11n and 5G Mhz also support a Mbps much greater the 68 Mbps?

Correct - but Wireless AC does a better job of supporting higher transfer rates farther away from a router than Wireless N.

So yes Wireless N is definitely capable of streaming 4K content, however given this Roku player is a wireless device and can’t be hard wired, you could run into buffering issues with a Wireless N connection where a Wireless AC connection wouldn’t have had any at the same physical location in your house.

Wireless AC is not a luxury or premium feature in 2018, so to not be included in a new device is subpar at least.

And if you have a spouse, two children, and the next door neighbors are all using the upper AC 5g band for 4K at some portion of the day, is that really going to workout?

You probably have exceeded your ISP download speed. The telcos need to hurry up that new wireless 5G rollout.

Possible - but lots of homes and condos in Canada now have FTTH to the services are 1000 Mbps and 1500 Mbps download. You’d need about 40-50 people watching at the same time to saturate that line.

I am in agreement Wireless N 5 GHz will work just fine in most use cases, however in that one fringe scenario where it causes buffering Wireless AC would have solved the problem. So if I was buying a new Roku to keep for the next 3-4 years, I’d get one with Wireless AC not only N.

The point I’m trying to make is that when converting over a house for 4K you almost have to rethink the size of all the data pipes.

Most client devices may be MiMo but they may only be using two spatial channels. A router may have only four antenna versus eight.

And 1000 Mbps really isn’t 1000 Mbps. Using an MTU of 1500 you probably couldn’t exceed 880 Mbps. You need to increase the size of the data sent in each transmission and reduce the number of acks.

So you would probably need jumbo packets of 8K (MTU) or more to come close to 1000 Mbps.