I did not use to miss recordings because of tuner conflicts but with Commercial Skip, I am missing recording several first
run shows a night. Previous seasons of Criminal Minds are very low on my priority list but my wife wants me to record them. I have unscheduled as previous seasons reruns as I want to skip. It always seems to be the previous seasons shows and comskip that win the timing conflict. My only option seems to be turning off Commercial Skipping. With the addition of Comskip Tablo needs a way to prioritize recordings. I would probably be happy if it could be done at the channel level so could prioritize first run stations or a switch that would do a look ahead and delay comskip if a recording would cause a conflict. Ideally it would be some priority setting in the recording options settings.

Comskip should be just like the FF previews, it only uses a tuner if a tuner is already free. If they are all in use it simply waits until one is free.

in Two cases only 3 programs were scheduled to record. In one case 4 programs were scheduled to record. So we have the tv programs, FF previews and comskip all competing for tuners with the tv program recordings losing out. That’s not why I bought a DVR. Cable DVRs have allowed you to set priorities probably since inception. For now, I will attempt to resolve my issues by setting some tv programs to start 2 minutes early and some to stop 2 minutes early. Not all TV programs are scheduled to start and stop on the hour. Comskip needs to have a little more intelligence. Without knowing how Tablo handles conflict resolution, you might look at a switch the would would keep Comskip processing from asking for a tuner for a period of time immediately before and after each hour and half hour. There should be an automated process to reduce the issue. For awhile Verizon handled the issue by rounding the start and stop time to the closest half hour. We don’t seem to have the issue with FF preview processing. My missed programs were “NCIS”, “The Fix” and “Man With A Plan”. This has occurred on other nights also. The issue varies and has not occurred twice with a particular program.

I would not mind a record option to flag programs that I want to send for commercial skip processing, or even a flag to do comskip processing over night. We seldom watch programs the same night they are recorded. Tablo might even look at two tiered pricing for Commercial Skipping. One price for prime time processing and an other for off hour processing.

That is incorrect. TV recordings always come first, with FF previews and comskip only happening if there are free tuners.

Are you a support person for Tablo. If you are then I am trying to bring something that I think is a problem to their attention and see if anyone else is having the same issues. If you are not, then you are not looking at my list of recordings. You state that this has to happen one way but what you are saying is not supported what I am seeing, or what is happening need to change now that we are doing Commercial Skipping Pricessing. Let’s leave this for Tablo to review. My response to your original reply was colored by your response to my original comments. I feel if the exchange between us continues, it is going to escalate and it is already out of hand. 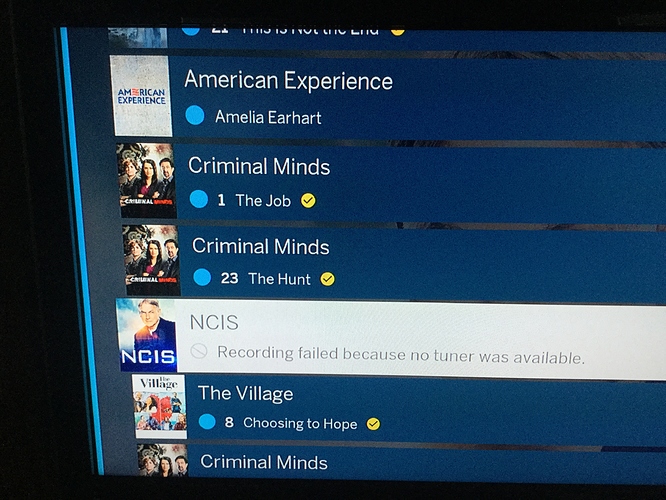 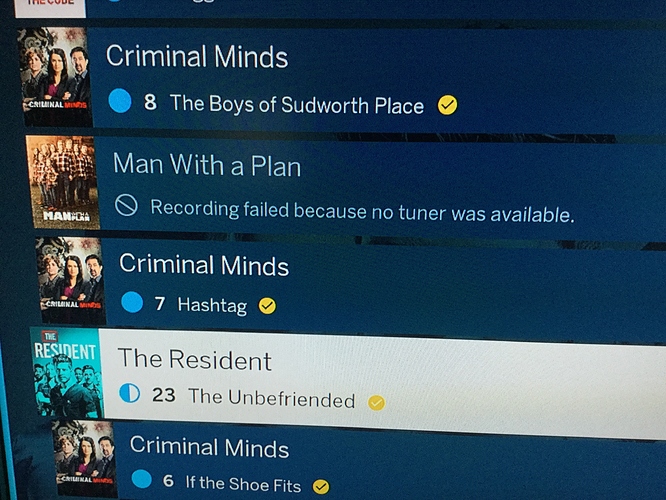 The NCIS program was the 3 rd of 4 programs scheduled to record. The Village, a movie that was later deleted, NCIS and then Criminal Minds. NCIS failed because no tuner was available.

Man With A Plan was the third program scheduled to record.
The Resident and Criminal Minds started recording, when Man With A Plan tried to record at 7:30 pm, it failed for no tuner available even though only two programs were being recorded.

Also The Fix failed to record when three other programs were recording and The Fix tried to start recording at 9:01 pm.

If you would like Tablo support to help, I recommend submitting a ticket to them. That way they can look at your logs to see what your Tablo was doing.

It’s possible that comskip is affecting your recordings, though I haven’t heard of anyone else reporting that issue. Have you looked at the Conflicts tab to verify you have no conflicts?

I am not Tablo Support. But have you recently changed your recording quality to “1080p 10 Mbps 720p @ 60 fps”? I ask this because 3 recordings at 720p @ 60 fps will lock your 4th tuner. The 4th tuner is needed to record at the higher fps so it is not available for a 4th recording.

But yes I also recommend opening a support ticket directly with Tablo Support so they can check your logs and confirm why it happened.

Thank you, I was not aware of this. After I made the recoding quality change, I had not experienced any issues until Comskip. I will probably turn Comskip off ond ply with my picture quality settings. I also think that I can resolve some issue with the start/stop time recording options.

Sorry for the misunderstanding. I am just trying to understand what is going on.

I view with a Roku Ultra but I checked with my Ipad and no conflicts listed.

Thanks, I dropped back to HD 1080 - 8 MPS and set the The Fixer to start 2 minutes early. The only item not explained by your information is why Man With A Plan did not record. If it occurs again I will get Support involved. I have been using HD 1080 10Mps, 720@60fps for some time, just because I did not see any adverse effects and it was there. I got my new TV at the end of December. 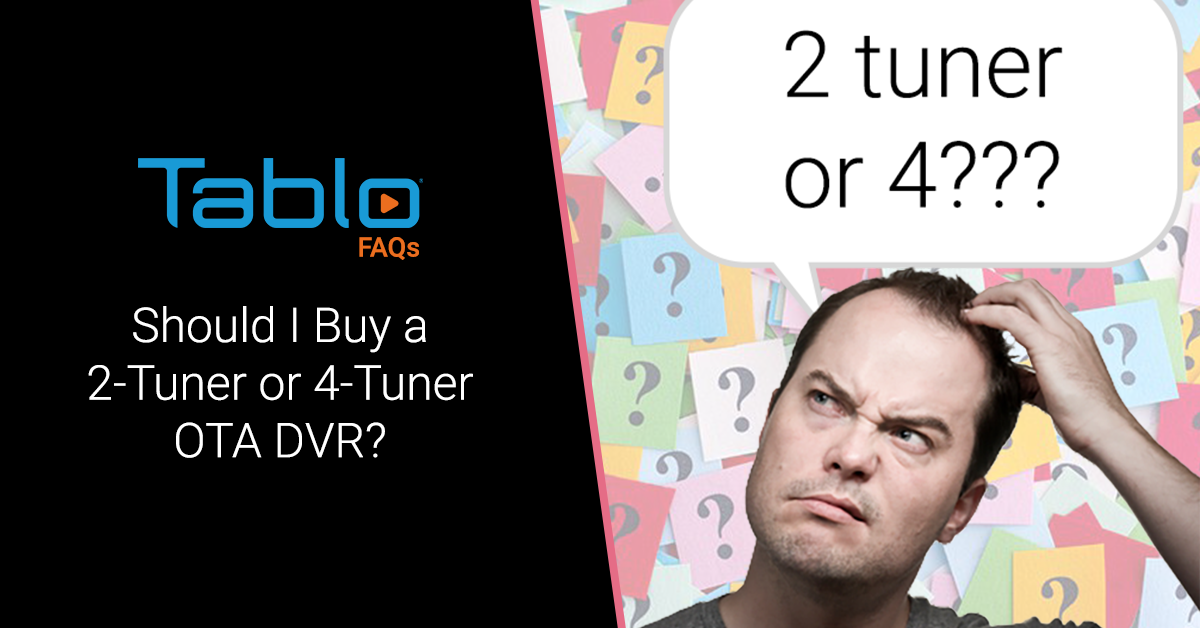 With the addition of Comskip Tablo needs a way to prioritize recordings.

This isn’t the perfect solution but I unscheduled a show I wanted to give a high priority and then rescheduled it. As I understand things that gives it a higher priority because it was recently scheduled.

I believe from my experience that priority is given to the show that starts first and if all the shows start at the same time the shows that were added most recently get higher priority.

Has tablo reached feature/functionality with it’s main competitors? If not maybe it needs to match their competition’s current features list before it launches into new features. “Almost every other recording device that has the ability to alter start and end times, allows you to do so in both directions.” If the someone claims that various products (“every other”) have this feature it would seem that it would be easy to provide a link to a user manual that explains how this feature is externa…

I don’t think either solution really makes up for a simple priority menu implemented by Tablo. I really wish they would do that but I don’t have that many conflicts.

Changing my recording picture quality from 1080p 10 Mbps 720p @ 60 fps to HD 1080 - 8 MPS seems to have resolved the error with no tuner available for most cases. I am just surprised that I had not encountered this issue earlier. I have been using the 1080p 10 Mbps 720p @ 60 fps setting since about the first of the year. I suspect that some of the shows had a lapse between being starting up and then getting the approval for additional episodes being produced and scheduled. This time of the year, the schedule is crowded but will slow down for the summer. My wife also scheduled some extra movies. I do not believe the Roku has a Conflict screen, so I may need to log onto my iPad to monitor for conflicts.

I will use the option to start recording a show 2 minutes early to establish a priority of a sort for programs set to start at 1 minute past the hour, like “The Fix”.

With these changes in place, I’ll see how it goes. I also figured out how to watch my missing episodes.

Thanks for the help. Things seem better.

I believe from my experience that priority is given to the show that starts first and if all the shows start at the same time the shows that were added most recently get higher priority.

Thanks, I’ll play with this later.

I forgot, you can use the “Coming Soon” screen on the Roku to monitor for conflicts, since it lists the scheduled recordings in recording priority order. Not as easy as the Conflict Screen but it is useable.

Looking at the Coming Soon screen, maybe priority should be given to shows listed as New vs reruns.