I’m thinking of buying a DUAL LITE. From what I’m reading on https://www.tablotv.com/setup-networking/#harddrive it’s as if the minimum hdd size is 1Tb. Is that right? What if I use a 120Gb drive I already have other than only having a few hours of recordings?

I don’t think that there is a “minimum” hard drive size. As you pointed out - smaller drives just can’t store as many recordings.

IMO you should get a drive a little larger than you think you’ll need.

And along the same line of thinking you should get a few more tuners then you think you will need. Because you will end up wanting them. Just my opinion.

This 120 GB drive is an actual hard drive though? Not a USB stick?

Why more tuners? How many channels do you think I get? On an extremely good day, I can get almost 20 English, unrebroadcasted channels. Usually it’s around 14 but I’m only guaranteed 10 (as long as the transmitters are working).

Yep, magnetic USB2.0 hdd I salvaged from a laptop a baby kicked coffee onto.
Come to think of it, I have a spare 500Gb as well. I guess I can experiment between the 2 of them.

Like I said my opinion only. I basically only get the ABC,CBS,NBC,FOX and CW. But early on I ran into tuner conflicts as more then two shows tried to record. And this was before they started adding all the sub channels. And if you plan on remote access that will also use a tuner.

Switching between drives is not recommended. Pick one and set it up with that drive and leave it.

Why not? What problems will I have if I rotate them during the experimental stage?

As long as you perform a factory reset of the Tablo between exchanging drives you’ll be fine.

Adding to what @theuser86 said, if you swap HDs without resetting you’ll end up with entries for recordings that may not exist on the drive. You can just delete them I suppose - but it could get confusing.

…Or you could make sure to delete all your test recordings before swapping the HD.

They sell a Dual with 128GB “on board” fixed storage 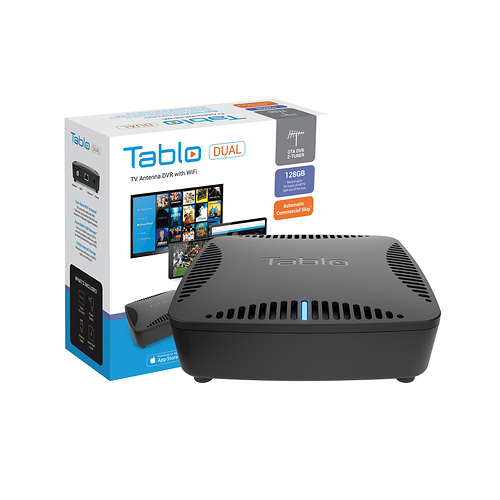 Tablo DUAL Over-The-Air DVR makes it even easier for cord cutters to stream and record live TV right out of the box with two tuners and 128GB onboard storage.

So they do work with less. I have 320GB drives connected to mine with no complaints.

Why not? What problems will I have if I rotate them during the experimental stage?

@Steve427 has said he’s done it “regularly” with out issue. It is not supported nor recommended. I have inadvertently done it, but I believe there are better ways to retrieve recordings.

I wouldn’t say it’s not supported or recommended. I did EXACTLY what’s “recommended” in the Tablo Knowledge Base under the title of " Moving your recordings to a new Tablo" written by Tablo’s own “David”. I have done it several times and it works exactly as described. The only thing I would point out is the knowledge base says it “takes several minutes”. In fact, it takes roughly one HOUR per 500 recordings on the drive, If you move a drive that has 1000 recordings on it, plan on it taking AT LEAST two hours.

I did EXACTLY what’s “recommended”

Misunderstood, I thought you swapped 2 drives between one tablo – not one drive between two tablos as the article “recommends” and instructs.

It WAS two drives between one Tablo. If you do a factory reset of the Tablo as the article describes, you’re essentially starting with a new (factory reset) Tablo every time. Makes no difference if it is in fact, NEW or factory reset. As the article says, " **Note : For this process to work, your NEW Tablo must be taken directly out of the box. If you’ve already run a channel scan on your new Tablo, you will need to [factory reset] http://support.tablotv.com/hc/en-us/articles/207989853) it for these instructions to work.**"

Here’s a link to the article…

If you replace your Tablo DVR the process below will allow you to migrate your existing recordings stored on an external disk (devices using internal storage, SATA storage or Cloud storage are not ...

The article you linked is how to move 1 hard drive from Tablo #1 (aka old Tablo device) to Tablo #2 (aka new Tablo device).

You’re right. I was responding to the question of “Why not? What problems will I have if I rotate them during the experimental stage?”

To copy/clone an HDD you can use something like this:
Amazon.com: Wavlink USB C 3.1 to SATA Dual Bay External Hard Drive Docking Station with Offline Clone for 2.5/3.5in SSD HDD SATA (SATA I/II/III) 6Gbps, Support 2X 8TB and UASP-Black: Computers & Accessories
I used this device to expand the storage on my now retired TiVo a few years back. It should work with Tablo as well but I’m not sure what would happen if the new drive is larger than the first, would you get the benefit of the larger drive or would you be limited to the size of the original drive?

It WAS two drives between one Tablo. If you do a factory reset of the Tablo as the article describes, you’re essentially starting with a new (factory reset) Tablo every time.

This is not “drive swapping” and recommended as you previously stated!! It is possible, and something anyone can do if they so decide – but the article DOES NOT explain how to use your tablo swapping drives back and forth. It may have the “same end result” and again, if someone wants to, so be it… but it’s not supported nor recommended and has inherent dangers.

I fail to see your point. If you do a factory reset on the Tablo, which obviously IS supported, the Tablo is in an “out of the box” state. The article clearly discusses how to transfer a used drive to a new OR factory reset Tablo. Does that not explain how to “swap” drives?