I have been using Tablo on several Rokus around the house for several months and love them. Just bought a 4th gen Apple TV and many of the features I am familiar with on the Rokus either don’t exist on the Apple TV app or I can’t figure out how to find/use them.

Is there a manual or any written instructions for the Apple TV Tablo App?

One HUGE negative I have found with the Apple TV Tablo App is that it’s useless for me over WiFi, even though everything else on my Apple TV works fine through WiFi. Only way to get the Tablo TV App to work well was to connect my Apple TV to wired ethernet. This is a problem because I don’t have wired ethernet to every TV and at this point the Apple TV’s are winning me over after years of using Rokus.

I would like to add that all of my Rokus perform almost perfectly on the same WiFi connection. This includes a Roku 1, a Roku 3, a Black (newer version) Roku Stick and a Purple Older version Roku Stick.

One thing I can’t seem to figure out on the Apple TV is how to edit already scheduled recordings. If I go to the recordings, I see all the episodes and can play them and delete them, no options to edit the scheduling options like on the Roku app.

Also, no ability to search for programs I may want to record. Did I just miss these two features or are they hidden like the fast forward/rewind feature that my wife finally stumbled on (pause, then slide finger right/left on touch pad).

We intend to introduce many of these features on the Apple TV in coming updates.
The Apple TV app doesn’t yet have access to the same Guide menus (TV shows, Movies, etc), so the scheduling needs to happen from the Live TV screen, for the time being.

We go over a few features here:
https://www.tablotv.com/for-appletv/

And we’ve got a bit more of a walkthrough here:
https://www.tablotv.com/blog/tablo-app-apple-tv-now-available/

This image may also be helpful for navigation: 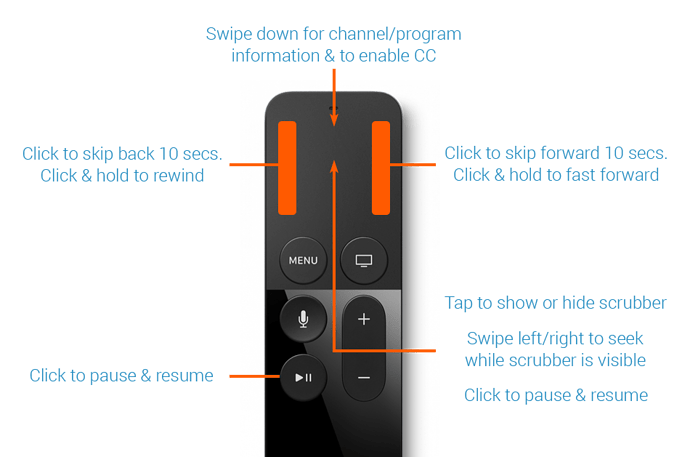