Major TV hits not showing up in series listings

First time poster here…thanks for this forum and for any help you can give me!

I’ve had my 4 tuner Tablo for a couple of months now, and have subscribed to the guide. All has been going well, or at least it was until I tried to program Tablo to record all the prime-time network shows my wife watches. The listings have a bunch of them, but some biggies are missing, like Grey’s Anatomy and Chicago Fire, Med & PD. I realize I could probably grab them once they appear in the live guide, but why wouldn’t they be in the series listing?

For me…is there any way to program the unit to record all OTA broadcasts of a particular sports team? I tried entering the team into the search function (as I did with the missing series) but came up empty.

If there are no episodes of those shows airing in the next two weeks, they won’t be in the show lists.

Same for the team. No games in the guide data period (two weeks), no listing.

Shows that have been set to record always show up in the lists, even if there are no episodes coming up.

I record all the Titans games, but I have to go in at least once every 2 weeks to get the upcoming games. And it isn’t a bad idea to look every Thursday or Friday to make sure nothing changed. There just isn’t a way to record one team’s games, though you could just record all NFL games (which hogs a lot of space).

Here is nice picture of all the premiere dates for the fall tv season. Most are starting the week of 9/23, so by Saturday 9/15, you can program all your shows. 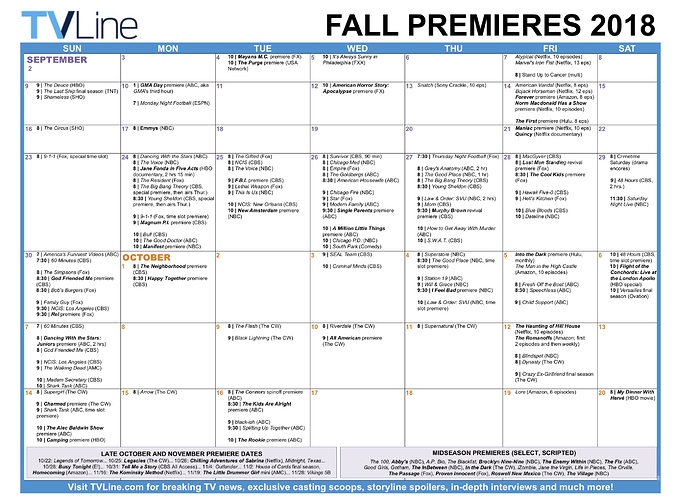 Great…thanks for the answers! I guess I’ll be spending some time programming on 9/15…

I also use a program on my phone (Android) called ‘Next Episode’. It gives you an alert the day before a series starts and you can ‘favorite’ well in advance.