Not sure this is a question but more of a concern. Or me just complaining. I am in Chicago area and I have been using my Tablo to record Medium on Start tv. We actually have two Start tv channels in the area but I have had a hard trouble picking it up on 2.2, so I have been using 48.2 instead. Channel 48.2 has been running for a while and worked great until a few days ago. Tablo was saying it couldn’t record it any more so I checked the channel and it seemed gone. Tried to rescan but nothing. I
checked some other antenna sites and they were saying that the their HDhomerun was saying that channel 48.2(and a few others) had changed from HD to avc. I had earlier talked to Tablo and they said it won’t work with avc. So I by-passed the tablo and went directly to my tv. The tv picked up channel 48.2 no problem. I think I am beginning to realize today that one day my poor tablo won’t pick anything up if they continue. Just needed to vent. Thanks for listening.

TV channels were shuffled around here in Austin, TX (RF channels), but the virtual channels stayed the same. By law, they have to continue broadcasting the channel on ATSC 1.0 for 5 years after the ATSC 3.0 starts. Theoretically, if your TV picks up the channel, a rescan on the Tablo should pick it up.

This isn’t always the case - there are situations where a channel is close to the digital cliff, and a TV (it doesn’t have an internal 4-way splitter) can pick it up, but the Tablo, which has a 4-way internal splitter (it is amplified) does not.

The tablo should pick it up, like you said, but it doesn’t. I think Tablo should make sure these work until channels go full 3.0. I don’t think their software should incorrectly assume all ATSC 1.0 are MPEG2

Doesn’t Start TV broadcast as 480i. Did that change? Is the station running out of RF capacity? Did the other channels also change to AVC?

Maybe the HDMI model would work for you.

I not sure if the broadcast changed to something other than 480i and i have no clue if they are running out of capacity. I did send them an email asking them what exactly was going on. But I have not heard back. As far as I could tell, within this arranged channels, meaning CBS, Startv, etc. Startv was the only one that changed to avc. Which I would of thought CBS would of changed first.

Not sure if AVC is higher profile. But still ATSC 1.0 as far as I know.

I would prefer my network Tablo or something close instead of using a HDMI model. If that was the case I could just use my TV, since it is able to pick up these avc with no problem. But I am also looking to record it etc not just watch.

The stations Wiki page indicates what the broadcast resolution is. Whether it was updated or would have been to reflect AVC is unknown.

there should be 3 other channels from that station.

What you read the information about OTA AVC you get the idea it was approved around 2009 so that broadcast resolution could be compressed using h.264 so that the RF bandwidth would allow for 1080p.

It seems rather late in the ATSC 1.0 game to change what would appear to be a 4801 resolution to AVC unless the station plans to pack a ton more ATSC channels onto that RF.

The problem being is Tablo isn’t even seeing this channel at all. So it can’t tell me anything about Start Tv. The only reason I know it is still there and that it was changed because I found someone on line with a HDhomerun and it came up and said it just recently changed to AVC. That is when my tablo lost com with it. I tried to rescan many times but it didn’t even see it any more. And again, like I said before I by-passed my tablo and just connected to my tv and it picked it up. My point being is if my tv can see, you would think Tablo would be able to pick it up too. Just saying… If Tablo doesn’t want to fix this, there isn’t too much I can do about it. Besides waiting for a newer box or looking some where else.

Could be. Problem is I don’t know. I just wish that Tablo could fix the software to pick this channel up so I don’t have to fight my antenna to get the lower freq channels. This one comes in good.

They may have relocated the channel to an RF channel that doesn’t come in well for you.

If the channels changed then I probably wouldn’t know the real number unless these are it. 48.2 being the one that Tablo wont pick up.

On line it shows them as this.

Normally if one of these channels are out, they are all out. Since they seem to be coming from the same place. Only one of them disappears on the Tablo. If I by-pass the Tablo the Start TV channel shows up again on my tv tuner only. So, I guess I am not prepared to say its the reception.

If you go to rabbitears for Chicago isn’t it:

Ironically my friends HDhomerun listings shows decades as AVC as well. You can probably guess my Tablo doesn’t show this channel either. But the other two it does. (Pic included) Shouldn’t they all show up? 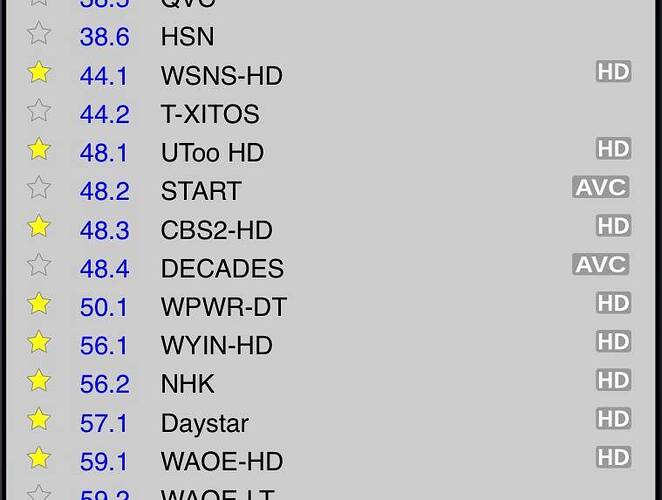 This is from my Tablo. 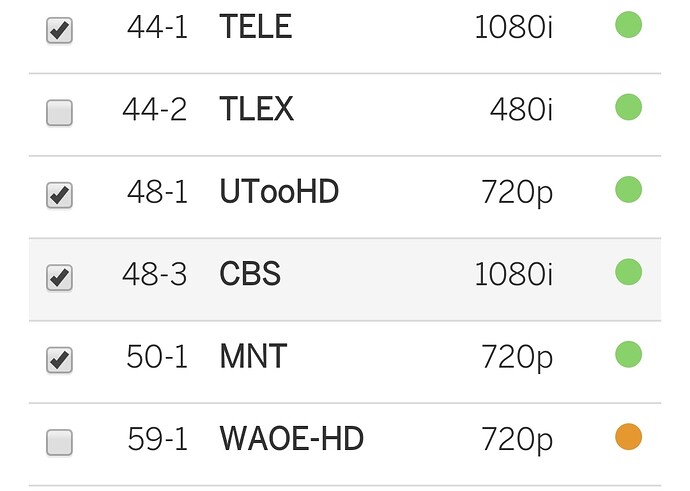