Lifetime subscription option going away for new buyers on Aug 30 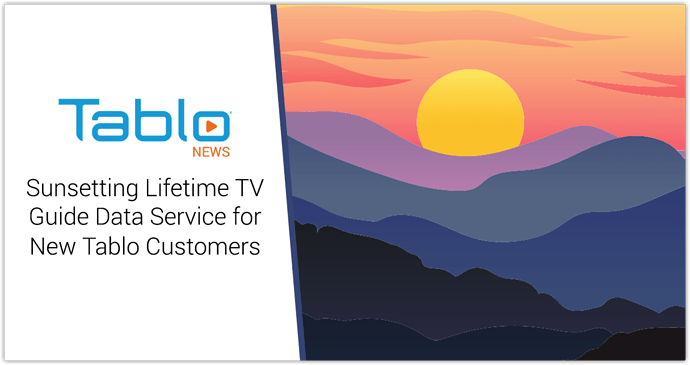 Lifetime TV Guide Data Service subscription plans have been offered to owners of network-connected Tablo DVRs since we first launched in 2014. However, starting August 30th, 2022, this subscription plan option will no longer be available for...

The article explains it pretty well, but I wanted to hear all of your thoughts on it. Right now, a yearly subscription is $49.99 (US dollars) and a lifetime is $179.99 (US dollars).

I can understand the Tablo folks wanting a steadier stream of income. Relying on hardware sales and one-time subscriptions can be really difficult to forecast. On the other hand, it was a good deal for Tablo buyers, and I think it helps develop brand loyalty.

Nothing will ever beat the old subscription model of “all Tablos are covered under one subscription”, but changing it to one subscription per Tablo (and can be transferred to another Tablo) didn’t seem to hurt sales. This change will get some backlash early on (similar to when other subscription changes were made), but likely won’t hurt sales in the long run either. Today’s consumer is used to subscriptions. And who knows what will happen with ATSC 3.0 devices become common. Will subscriptions still be necessary?

They’re really not learning from history. Using the TiVo, “How to go out of business”, playbook. Take away features that were absolutely included in the subscription cost then change your wording and say it really was never included. Force people to pay a subscription price when the whole point of going OTA is not to have to pay a subscription price. Do what is considered to be absolutely no advertising to try and gain new customers. What’s next the Tablo TV streaming stick?

It’s not pretty but you do have the option to go OTA with a Tablo and NOT pay a subscription price. My guess is the cost of the guide data has increased (what hasn’t in the last two years) and history also shows that businesses that that cover their costs also are following the “how to go out of business” playbook.

I figured this was inevitable and is why I bought my lifetime subscription several years ago. It’s a tough decision for them to have to make I’m sure, but they are at least giving some notice to allow people (even people that buy a Tablo between now and 8/30) to get a lifetime subscription if they so desire (which cannot be said for all companies that do things like this).

This reminds me of Sirius radio when they started. You could get a lifetime subscription for $500. I know they discontinued it years ago.

OK, haters, pile on. I like my Tablo. Have had a lifetime subscription for maybe 8 years. If they needed more bucks to make it work for them, I would be OK with that.

I have had some lifetime promises (witnessed by a bunch of people) that have not worked out for the other party. I just had to learn to adjust and not get angry.

I have muliple units and when they made the subscription switch I would have bought another lifetime subscription.

But the original multi-unit lifetime subscription allowed me to buy 2 2-tuner models versus 1 4-tuner. That way I ensured that there was enough CPU to cover my needs. Plus I had redundancy and I didn’t have to whine that the 4-tuner was as hot as the sun…

In Business you either adapt or die.
You can switch to a lifetime subscription before August 30th.
After that date, you wont have to buy a Tablo if you don’t like your options.
So, what exactly is the issue here?

I have a two tuner (no subscription) network attached model I bought last year for testing. I have plans to buy a four tuner model in the future. It will most likely be in a few years.

Do I have to buy a TV Guide Data Service subscription for each Tablo unit?

Tablo's TV Guide Data Service subscriptions are tied to your account, not a specific Tablo device. In the event that you need to replace or decide to upgrade your Tablo, you can swap the unit atta...

Thank you for your reply.

If I’m reading that right, it appears that when I purchase the four tuner device I can have the subscription on both devices as long as both devices are assigned to my Tablo account.

Only if you you have a legacy subscription account that was created prior to March 7, 2019.

In that case you would need to contact support to have the second Tablo added as that function cannot be performed via the self-serve account portal.

This will probably be something that turns off some of my customers who have been on the fence re: cordcutting who I’ve demoed my 4-Tuner to… hmmm.

Most of my cordcutting customers so far have ended up just sticking to getting a few streaming services that they turn on and off as needed?

Most lean heavily on the free with ads apps like PlutoTV. The ones who live where a signal is easily reached with an attic antenna … only one has gone with a Tablo so far after seeing a demo.

One of the points of cutting the cord for most of them is to reduce recurring costs/subscriptions? $50/yr forever compared to adding the $180 on top of the initial cost of the device? It will make a difference to at least a few of them.

I’d much rather see the Lifetime price go up a bit this year then next then have it go away all-together? I’m sure there’s a sweet spot in the $200-$250 range that would still scratch the lifetime itch for buyers wanting an option for Lifetime, but help the bottom line enough for the company?

It’s worth noting here that Tablo has to pay Gracenote for the guide data. Since I don’t think Nuvyyo owns Gracenote, they probably pay Gracenote some agreed to amount per subscriber per month, even for the lifetime users. Once you pass 3.5 years or so, Nuvyyo is subsidizing your guide data subscription for the rest of your account’s life (since they do allow you to move it to a new device when a current device dies, etc).

At some point, this cuts into profitability. Every business, including Nuvyyo and Gracenote, is entitled to make a fair profit. There are costs in aggregating the guide data and providing it.

As a now former TiVo user, paying $4.99 per month or $49.99 per year (with no sales tax because Nuvyyo is in Canada and I live in Brandon, Mississippi, USA) for solid Gracenote guide data is FAR AND AWAY BETTER than paying TiVo $14.99/month or $149.99/year or even $349/lifetime for that AWFUL Rovi guide data on a TiVo Bolt.

I wanted to start using Tablo in 2016, but that was rejected due to a lack of Dolby Digital 5.1 passthrough. Two years later, probably due to clear indications that it mattered to a lot of customers, they added it. I knew that if my TiVo went fatal, which it did about 6 weeks ago, my plan B was to switch over to Tablo and I am glad I did.

In many ways, I see Tablo responding to DVR customer needs way better than TiVo does now. They are working to keep the service affordable for every customer. Also, the revenue from units and from the subscription service fund the support personnel that seem to be reasonably solid. The best tech support comes from United States and Canadian techs, in my opinion.

Tablo even allows you to not subscribe and get 24 hours of guide data and allow you to manually record. My old TiVo Bolt with no subscription will only do live TV, no DVR functions at all.

I don’t watch the major TV channels (NBC, CBS, ABC or FOX - is there anything good on them?). I only watch the sub-channels such as MeTV. However these sub-channels are now appearing on streaming channels such as Friendly or Pluto at better quality of picture. Friendly costs me just $7.95 a month and I get ten sub-channels I normally watch (along with Hallmark for my wife). Friendly ever allows me “record” (i.e. retain) programs for 30 days. It also gives me a two week guide.

So why would I need a Tablo with a hit or miss antenna when for $7.95 I get all the channels I want flawlessly at better picture quality? And if I want to record a show from my Roku to a personal library, I have a $10 HDMI-to-USB adapter that goes from my Roku to my PC.

When my Tablo dies, that will be it for OTA recording. I’ll only use OTA with my TV tuner for live events. The Tablo has been a good product but the migration of lots of sub-channels to free or inexpensive streaming obviates the need for me for a Tablo even with a lifetime subscription…

I also have Friendly (7.95) plus BBC (5.95 for show like Poirot) and Amazon Prime ($8). My streaming bill is about $20 a month - giving me all the sub-channels and movies I need (more than enough a week). So the need for OTA goes away whatever the subscription plan… Ever since MeTV and Heroes & Icons have appeared on Friendly I haven’t recorded anything on my Tablo for over 6 months.

We have been happily paying the yearly subscription since early 2015. Other than paying for internet service it’s our only other TV viewing cost. I always looked at it as a small price to pay for the excellent service it has given us.

I am actually more surprised it lasted as long as it has.

When I was looking into an OTA DVR the option of a lifetime subscriptions was a key factor in my choosing Tablo though so as much as I understand why they need to do it (as outlined above about the gracenote charges), truth is, I likely wouldn’t have gone this path early on without it.

I assume most on this forum have already decided its worth it or its not so don’t expect a lot here will have a big issue with it, the question will be if it hurts sales in the future?

(My guess is no, it won’t or at least not enough to counter the benefits of it going away.)

One thing I have learned when it comes to technology over the last 50 years. It changes. Not just hardware and software - but the way business is done. I can remember paying for long distance calls. Who has done that in the last 10 years? Many people eliminated them 20 years ago.

The point is this - the industry has changed. I am sure that licensing fees for different technologies have gone up, as well as licensing fees for access to data (namely guide data). Yes, it sucks that a lifetime subscription isn’t available going into the future. But by mandating that they keep it, you may be dooming a company to get out of the business.

I truly hope that Tablo keeps fees reasonable, and keeps producing the DVR that I believe to be the best on the market right now for most people. I don’t want to see them going away anytime soon.

Legally current gen tuners could become obsolete in July 2023 in certain markets. I think that requires a waiver though which seems unlikely accept in the rare cases and only in small markets. 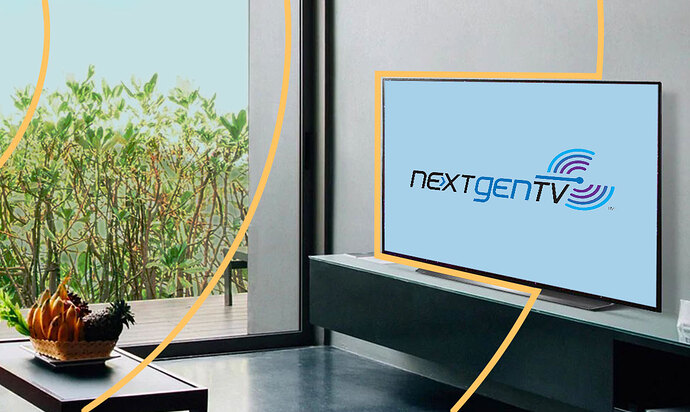 FCC is requiring simulcast of 1.0 and 3.0 for 5 years. I suspect 1.0 tuners have an ABSOLUTE MINIMUM life(receiving all channels) of 4 years in most markets and possibly as long as 10 with channel selection slowly decreasing rather then just ending abruptly in most markets.

I assume you mean the ATSC 3.0 HDMI version in this paragraph? Just clarifying in case someone stumbles across this thread later since there is a current HDMI version as well.