Has anyone ever successfully used a hard drive larger than 8TB on a networked Tablo Quad? The price of hard drives larger than 8TB seems to be going down and I’ve seen various posts saying it might work, but none that say whether it actually does or not. Thanks in advance for all replies.

Not sure. Even 8TB at max settings, likely would take you years of never deleting to fill it up, but you may be trying to record everything, so YMMV.

Recently started using a WD Elements 8TB drive, so not desperate. When I bought the 8TB, I saw the 10 and 12TB were not a lot more, though, which made me wonder if they would work. Research was inconclusive, though, and I didn’t want to spend around $200 to find out they didn’t.

If you had a 12 TB drive full 30 minute 480i recordings is there enought onboard memory to hold all of that metadata. And if so how long would it take to upload the metadata for 11,000+ recordings to a Roku or fire tv stick.

Using a 12TB drive with no problems…… 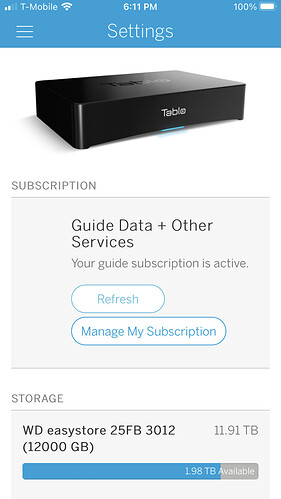 So just how many recording do you actually have on the disk. Isn’t the worse case 23,000+ 30 minute 480i recordings. And if you cleared the browser cache and connected to the tablo unit how long would it take to load the metadata for that many recordings into the browser?

Zippy, I’m afraid I don’t have the time to quantify the data you requested. I can only say I am satisfied with the TABLO’s overall performance and have no complaints.

I think users should use larger drives if they so desire - with whatever road bumps they encounter. But that is different then having tablo say they have tested large drives on all models and they work.

I believe I’m beginning to see your point. Sure an 8TB drive will function, the tablo OS can access it and and there’s no issues r/w them massive size.

The graphic art is stored internally. For each title, movie, even it will have a graphic - not episode. This could accumulate, possibly beyond internal capacity?

Great simple answer to a simple question. Thanks Wolfpack! You might consider changing your handle on here to ALPHAWOLF!

Wolfpack - could you let us know how full your drive is? The number of TBs used should be readily available under Storage on the Settings screen, at least it is on my Fire TV Tablo app. Not sure what app you’re using (Roku, Fire TV, etc.) but the drive data should be in there somewhere. Thank you.

There are 57 channels in the Guide.

Somebody has a whole lot of TV to watch!

As Wolfpack has used almost 10 TB of disk space and his Tablo is still functioning normally, it would seem that our Tablos would do the same with 12TB or smaller drives. Thanks to all for the replies.

P.S. My apologies to Wolfpack for not noticing the same information in his original post. 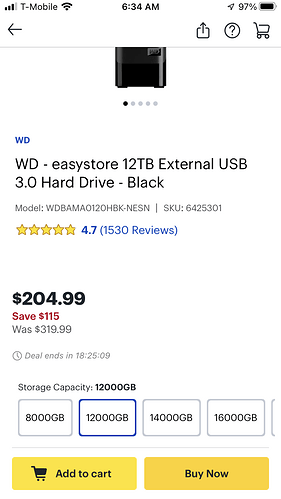