Issue with shows not showing in Chrome Browser my.tablotv.com

@TabloSuppport I just noticed this last night. ABC and Nashville not showing up when I go to the Channel view. I can see it on iPad but Web App does not show the show.

Web app on iPhone, Android device of through Chrome browser on computer?

Chrome Browser on any device. I changed the description to be clearer

I know you’re an avid forum member so this question may be dumb, but did you try deleting the cached data in Chrome for my.tablotv.com and then re-sync’ing?

Or try connecting and syncing with an incognito tab is a possibility to try too?

Nashville is on the browser. Plus I tried on devices I never use it on, so it is not a data issue. Just not showing up as a show on that particular channel

Is this what you are describing?  Some channels have shows in the guide, while others do not?  This happens to me all the time. 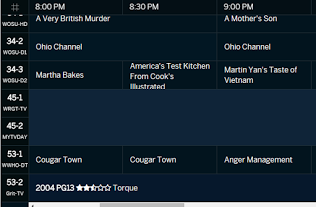 @ddd671 don’t see any image, but it is in the data, just not showing when I look only at the channel in Prime.

@Jestep  I had to edit the image, for some reason the link didn’t work.  In my case it is in the “Live TV” grid view.  Sounds like you have a different issue.

@Jestep  I had to edit the image, for some reason the link didn't work.  In my case it is in the "Live TV" grid view.  Sounds like you have a different issue.

Yea, that is an entirely different issue. I wonder, did those channels go away? Maybe if you did a rescan would they even show up any more?

No, the channels are there. If I “tune” to them by clicking on the channel number they actually play.  They are also intermittent.  In a couple of days the missing channel’s information will return, and others will disappear.

@ddd671 is the guide data current? If so, delete the data for my.tablotv.com so it can resync again.

The data is current.  I’ve tried restarting the Tablo, clearing the browser cache, re-syncs, different browsers, etc.  Nothing seems to have an effect except a full factory reset which only fixes it for a day or two.

It is a problem, but not one that is big enough to matter much to me.  I don’t watch TV on the web app; mostly I use it to schedule recordings and I have the recordings I want already scheduled.  I typically use titantv.com from my phone or tablet to see what is on, so I don’t really need the guide anyway.  The only reason I use the web app at all is initial setup of the Tablo and scheduling since I have Fire TV’s.  I had issues sideloading the android app (network issues on my side, not Tablo’s fault) and currently use Plex as a workaround until the native AFTV app comes out this month. Once that happy day arrives I expect this all to be moot.

Ok, so this issue is a Daylight Savings issue and they are aware of the issue