Is there a way to record shows in a series only on certain day(s)?

For example, the show is broadcast every day, but I want to record only Saturday’s and/or Sunday’s show each week. I do not see a way to do this. Thanks.

Yup. That would be nice.
Along the same line, a show is broadcast everyday but I want to record Monday through Friday’s only

If it is broadcast at a consistent time, you could schedule a manual recording.

Naturally. But manual recordings don’t have Commercial Skip.
Nice to have. Not a big deal.

If you wanted 5 out of 7 with commercial skip ability, it would be minimal effort to just record everything and just delete the unwanted episodes. It’s not the strain some may fear on the device or drive. …if that’s important.

If you just wanted weekend, with an option of commercial skip, it would take a bit of interaction -if it’s important enough.

Tablo OTA DVRs with an active TV Guide Data Service subscription (or currently in their 30 day trial) have access to Advanced Recording Features, which bring advanced recording management tools to ...

Have it record all, keep just one --you’ll have to stay on top of things and mark your weekend shows as protected. These will only be deleted by a user manually.

Many users are equating drive use to the long gone days of early drive on a Windows/DOS system.

A repeating manual recording won’t work? Is it not the same time and channel every Saturday and Sunday?

That’s how it works for me, have over 25 manual repeating recordings for single days, m-f, and so on.

Like the others have said, especially if it’s on at the same time on both days you can do a repeating manual recording and select Saturday and Sunday and the time and you won’t have to create anything else, it will use that schedule going forward.

Thank you for clarifying. I was not aware of this option

This is exactly what I was looking for. There is no need to record all shows and then manually delete the ones you do not want to watch (as others have suggested).

Not eloquent - but work-a-rounds aren’t always, but they get the results.

Update: Tried to do this yesterday and there is no way to schedule only Saturday’s show in the series if the show is broadcast every day. It is all or one. So, I guess, at this point “manual” recording of each week’s show is the only option. Tablo folks - please consider adding this as a feature. This used to be available even on the old VCRs!

But there is. And you only have to schedule it once (and forget it!)
Please see attached image 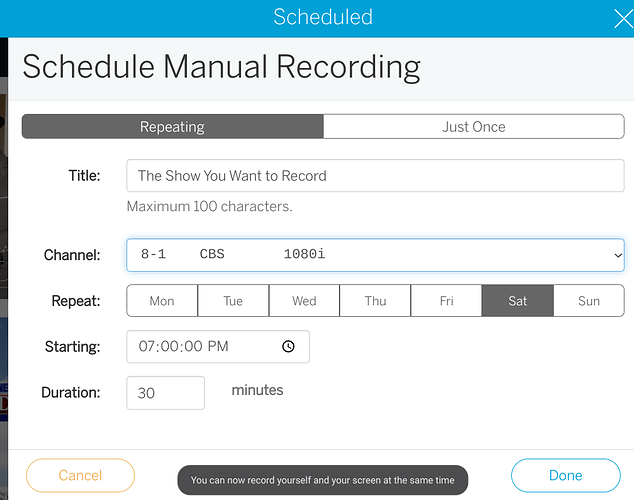 I had this same issue. The only thing I could figure out was a repeating manually scheduled recording. I only wanted to record the news that aired on that channel Saturday and Sunday. I set that up over a year ago and it works every week with no additional interaction.

Tablo doesn’t make this feature obvious. @goseecal I see how you missed it and given the name I can see how you might have thought we were talking about a different recording feature.

Thanks @aritafari I remember using this feature a while back. This should work as long as the program starts at the same time each week.