Intermittent Buffering only on certain devices

I’ve noticed an issue recently with a few of my wireless devices when trying to watch live or recorded TV from the (hardwired) Tablo. I get “waves” of buffering intermittently on my Fire Tablet and my Ubuntu (Firefox) laptop, but not on my Android phone. I also have noticed intermittent buffering on my Fire TV stick, but not on my hardwired Fire TV (granted, I don’t use that one often enough to definitely say it isn’t affected). However, the issues on the Fire TV products are fleeting in comparison to the Fire Tablet and the laptop.

Usually, I can watch a program for an extended period of time without issue, and then a wave of buffering will start, and the program is unwatchable for 5-30 minutes. It will play the video in 5-60 second chunks, and then pause to buffer, usually for 15-120 seconds, before playing another chunk of video. Originally I thought it was an antenna issue, but the signal is crystal clear, and there is no evidence of macroblocking or any other signal degradation. Further, I can turn on the exact same channel on my phone and get a perfectly fine transmission.

This issue didn’t happen prior to the last firmware update, so I believe it is something that has broken in that update. I originally thought that my 5 year old router may be the culprit, but I would think that a router issue would cause problems with all of my wireless devices, not just the tablet and the laptop. Anybody experience something similar?

Are all your wireless strengths on the various devices excellent? I installed a cell phone filter on my antenna input and that eliminated a lot of signal interference I was getting from the 4g phones.

Your five year old router is the problem mate. That was ready for the bin a few years back.

Your five year old router is the problem mate. That was ready for the bin a few years back.

I’d more willingly accept the router as the problem if it wasn’t working perfectly fine on all my other devices and for all my other streaming apps on the affected devices. Rather than shoving me out the door to drop $150 on a new state of the art router, how about we take a look at some other potential causes?

Are all your wireless strengths on the various devices excellent?

I haven’t noticed any change based on wireless strengths. I can move the device around the house and have the same issue.

Try, on every device you’re having issues with, to do a speed test to see if that specific device, from the location you’re using it, gets a goot throughput on the wireless connection.

Also install something like WiFi analyzer and see what the signal looks like and if there is contention from other signals broadcasting on the same band.

Thanks for the reply!

Wifi Analyzer from a known place where I have issues with the Tablo streaming. My networks are in Red and Light Blue, respectively. 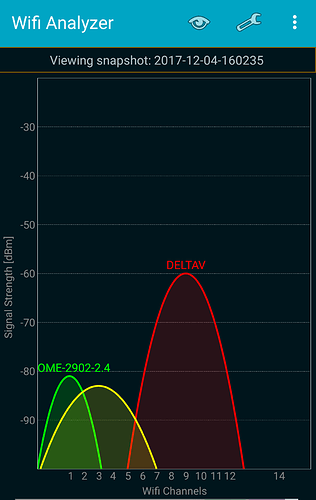 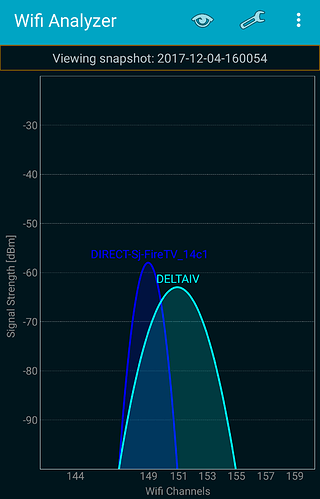 The last firmware update was back in June, for 2.216 - have you been having issues since then? Have you tested changing your Tablo’s recording quality to see if the 2.4Ghz devices have an easier time?

Honestly, I haven’t kept track of exactly when the issue started, but it has been a few months. June seems a bit early. It was definitely happening by October.

It is possible that there are 2 different issues at hand. The laptop has somewhat different symptoms than the tablet. The tablet is completely unusable for streaming from the Tablo. Upon starting a stream, it immediately goes into a buffering cycle, where it’ll buffer for minutes and then play for seconds, over and over. The laptop will play normally for a while (sometimes up to an hour) and then will go into a buffering cycle (buffer for minutes and play for seconds, over and over) for anywhere between 5 and 60 minutes before returning to normal operation.

I initially thought this was an open and shut router case because of the behavior of the laptop, but last night I was watching TV after everybody else had gone to bed, so it was the only (heavy) traffic running through the router, and it was worse than ever. Either my router is slowly dying (which isn’t out of the question), or something else is going on.

EDIT: I bumped the recording quality down to 720 (5Mbps), and it appears to have resolved the issue for both devices. I’ll keep an eye on them for a little while to see if the issue is gone. Thanks for the suggestion! It’s a bit concerning that my router can’t seem to handle 8 megs of sustained data throughput over a 30 foot wireless connection.

Glad I could help

I was having a similar buffering problem with both of my Roku 1 boxes that started in late September or early October. My Roku 3 was unaffected, but the Roku 1s would pause to buffer in the middle of playback that would make them unwatchable. I changed the broadcast channel on my ASUS N66-RT router last night to avoid several other networks I could see in the vicinity, and both Roku 1 devices are working as well as the Roku 3 connected via 5 GHz. I already had ‘Enable Fast Live TV Startup’ disabled, my recording resolution set to HD 720 - 5 Mbps (my highest resolution TV is a 720p TV anyway), and the Tablo connected to the router via ethernet. I have a Winegard HD 8200U antenna feeding signal to the Tablo that I had mounted in April 2016 feeding signal to the Tablo, so the antenna isn’t the issue either.

Thanks for the feedback. It’s made life much better since I don’t need to think about buying two new TVs.