WWE and Fox are airing WWE Specials on Fox Before Smackdown comes to the network.The Specials That the Story is Talking about are already available on the Tablo Guide if you want to set your DVR. There is Several reasons this Is going on, one Fox Sports Paid over $1 Billion to air WWE Smackdown on the Fox Network So Fox is Doing a lot To Promote Smackdown coming to the network. Two as an FYI Smackdown is returning to OTA Broadcast tv after six years of being on Cable Networks SYFY, and USA. Smackdown Debuted on defunct OTA Network UPN in 1999, before going to cable it aired on Both The CW, then My Network TV when my Network was a network with English speaking Telanovelas. On oct Fourth it will premiere on Fox one of the Big 4 TV Networks, which is way bigger than the network (UPN) it Debuted on. Also wwe announced that Brock Lesner will go against Kofi Kingston for the wwe Title as a Main Event for the Fox Premiere of SmackDown a PPV caliber match two days before the Hell in a cell PPV. Also here is a picture from my DVR of the Two Specials Fox is airing. 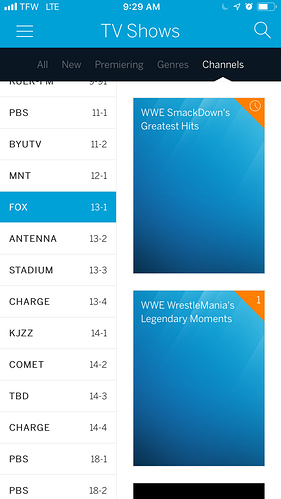