I think I just purchased my last antennas

Many years ago when we cut the cord and years before we purchased Tablo I purchased 2 of this antenna from Solid Signal HDB8X. One to aim north, the other south. All broadcast towers are between 45 and 50 miles from my house, both north and south. They worked great. But we always had some channels that struggled to come in unless the atmospheric conditions were perfect. Later I tried a pair of ClearStream 4 antennas but to my dismay, they underperformed compared to my pair of HDB8X’s. Not by much but they certainly did not perform better. So I thought maybe I can’t do better.

Recently I’ve been watching and studying the Televes antenna DAT790 LR Mix. Every once and a while Solid Signal has a sale on it for $79.99. Well last week I broke down and ordered 2. All I can say is wow. Before I started the dismantling of my current antennas, and install of the new ones, I turned on my Sharp Quattron to write down the current signal strengths of each base channel. Mind you that day was particularly bad for TV reception. Maybe it was the thick fog. After several hours of work I went down to rescan the TV and check my new signal strengths. Below are the results. I am extremely happy.

Oh and after rescanning Tablo all 52 channels are at full strength with 5 green dots. With the old antennas 3 base and their sub channels were 2 or 3 red or orange dots.

Can you please provide a link to said antenna? I’m interested

Are we comparing apples to apples or apples to oranges? The Televes has a powerful 32 db amplifier built in. Were the HDB8Xs amplified (i.e did you attach a preamp between them and the receiver - not a distribution amp which typically is only 8 db)?

One would have to compare Televes with HDB8X if the HDB8X had a preamp (which it normally does not).

Oh I think it is pretty much apples and apples. The HDB8Xs were amplified by a high gain 30db Radio Shack mast mounted amp. This amp is a solid performer having put it up against other amps over the years only to return them to the stores when they could not beat the old RS amp.

All I did was remove the HDB8Xs and mount the Televes antennas pretty much in their place on the 10’ mast. I reused the 6-foot equal length cables connected to each antenna running to the same reused combiner. Of course, I removed the mast mounted RS amp because each Televes has their own integrated into the antenna. In the house, I removed the power supply for the RS amp and replaced it with one of the ones that came with the Televes antennas. Yes, I have an extra power supply now from the other antenna. The Televes power supplies have 2 outputs so I ran one into the 4 way distribution amp and the other into a simple 3 way splitter. Interesting one of the 3 TVs being supplied from the splitter is seeing much higher signal strengths than before. It’s a cheap Dynex TV in our bedroom with a signal strength feature much like Tablo with colored dots. Many of the 52 channels are reporting full strength.

When I first mounted one of the antennas and roughly aimed it north I went in the house to check signal strength bypassing my distribution amp and going directly to my Sharp TV. To my surprise, I received all available channels even the ones to the south. Signals were weaker on the south channels but they all came in with no issues. It was then that I knew I was on to something.

And the Sharp TV that has the signal strength meter is the farthest from the antennas. Some 110 feet of cable total. It’s also the reason it rarely received certain channels while other lesser TVs with less cable length had better luck with them.

One other observation is the relatively even signal strengths I’m seeing now across all channels. I just checked the weakest channels tonight and they were at 78 with the strongest ones at 100. My other antennas would see swings from 0 to low 90’s during the same test period.

Again, I think this was a pretty fair comparison.

Thought I’d share a photo of my antenna setup. Performance has been awesome. No more failed recordings due to weak signals. 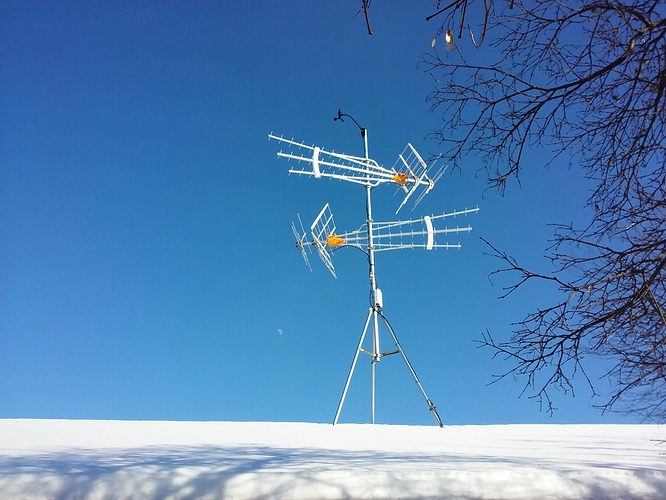 What’s that weird white stuff on your roof?

I don’t know about you guys, but up here at Tablo HQ we’re getting to the point where we want to tell Mother Nature where she can stick her frosting

We need to swap a bit of weather.

We need to swap a bit of weather.

Anytime. I think we’re all getting rickets.

Here’s our forecast thanks to YouTube weather dude sensation Frankie:

“Order your pizzas and Thai food!!”

Thought I’d share a photo of my antenna setup. Performance has been awesome. No more failed recordings due to weak signals.

Those are some awesome looking antennas…look like they should be in a low earth orbit!