How to transfer recordings

I am replacing my hard drive and I’ve got a lot of recordings.  Is there a way to transfer recordings from the old to the new drive?

Currently No.  I HOPE HOPE HOPE there will be prior to getting the quad tuner.

I dont know if Tablo will allow this post or not.  But I had a Tablo swapped out and all the recording were no longer playable on the new tablo.  The m3u8 files on the tablo drive only make sense under the Tablo environment.  So they are not playable locally.  So  I wrote a pair of scripts that will generate a new m3u8 file so you can play your tablo recording on a local system.  And if you use vlc you can load the m3u8 file and convert the video into a mp4.  Its a linux script of course.  All you need to do is connect your tablo usb drive to a linux system and copy the contents to a local file system, keeping the file structure intact…  Then run the script.  The down side is the output file  will be named something like 576943.m3u8.  Where 576943 is the recording directory.  Inside that directory is a meta.txt file will all the details on the recording.  In theory a script can use data in that file to create meaningful file-name but I have not been able to find any consistency in the file layout.

Both scripts need to be run from the top level directory of the Tablo drive file structure.

This second script if run will call the  create-m3u8.sh script for every recording directory.
#!/bin/sh
# script to run create-m3u8.sh to create new .m3u8 files for all Tablo video

I'm in a similar situation described by steveo7, but unfortunately I'm not a Linux user. Do you know if there is a way to do the same thing described above but with sw that runs under windows ?

I wonder if you can just clone the old hard drive and put in on he new drive?

I have used clonzilla live a couple of time with success!

I bet if you search the forum you find multiple post. Another option is to allow tablo to format the new drive then copy (rsync) the files back.

After purchasing a Tablo (coming from MythTV), I was worried about all my recorded shows being in a single hard drive without a proper backup. After reading a bit here in the forums, and learning a few neat things about the Tablo webserver, I found a potential way to backup the Tablo’s recorded shows. After some quick sucessfull tests, I wrote a small bash script to backup (not transcode) my recordings to my ZFS server. As a bonus, I wrote directions on how to restore them to a Tablo too …

which can be used to restore to a new drive. 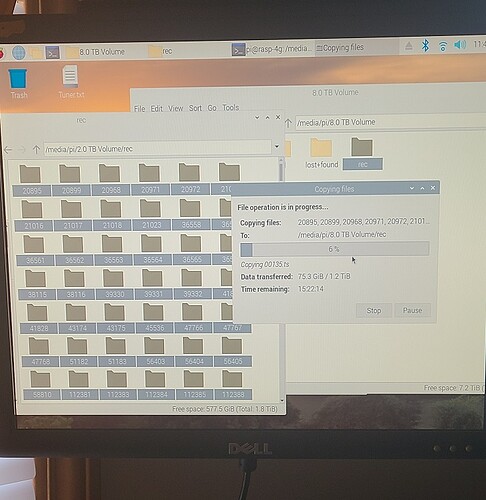 So I found my Tablo’s hard drive getting close to being full. I have a 2t drive. So I decided to get 8t drive. Then I ran into how how am I going to transfer all the programs. So I formatted the hard drive on Tablo and then moved both drives and connected them to my Raspberry pi. Then copied them over. It worked like a charm. I still think there needs to be a better way to do this but this worked for me if you have no other choice.

One time my Tablo screwed up during the World series that I just recorded on my Tablo. I couldn’t access the drive thru the Tablo or the ripper. Tech support said format the drive to get it to work. I would loose all the videos and the World Series. I finally connected it to my Pi and copied the clips to my computer and joined them together to get my would series videos. It worked. Then afterwards I reformatted the hard drive so the Tablo could use it again. But at least I got my World Series videos to work after the Tablo screwed up.

Somewhere I bookmarked a post from tablo support, along the lines it would take root access for the to create a “utility” to move recordings to another drive

btw, all files are owned by user root, so, yea, it makes sense to a point.