How to tell if you are connected wifi or wired

Hi, I am wondering what is the easy way to tell if you are actually connected with the wire or wifi.

As I have to move and unplug the router and modem a few times and after I plugged everything back together I had the blue light blink once per second or so.

after multiple attempt to connect using the App I was finally able to connect but don’t know if is with the wire or not.

And I don’t want to go trough the trouble again it seem after I unplug the internet for any reason Tablo had a hard time connecting back.

The easiest way to tell is to go to your router Web site and look up your connected devices. If the Mac address of the Tablo matches what is printed on the Tablo, then it is wired. If it doesn’t match, then it is using WiFi.

If there’s an Ethernet cable connected, Tablo will not broadcast via WiFi.

If there’s an Ethernet cable connected, Tablo will not broadcast via WiFi.

That’s not necessarily true. If the Tablo is brought up in WiFi mode first, and then an Ethernet cable is connected, it will stay in WiFi mode until the Tablo is rebooted. I had that happen to me when I was moving some wires around, and my Rokus suddenly were very slow.

Ty, I see the tablo and under interface it say 5g so I assume at this point is using wifi. I have not confirmed the mac address.

Does anyone else have a hard time after rebooting the router or tablo to get tablo to connect back either by wifi or wired?

Does anyone else have a hard time after rebooting the router or tablo to get tablo to connect back either by wifi or wired?

Never had a problem like that, but I do have my Tablo’s IP address reserved as a static IP address, so it never changes.

thanks, I guess I will have to figure out how to do that as I have a hard time connecting to tablo after a power cycle. It take me anywhere from 10min to 20min after the router is back up online to be able to get tablo to connect and at the end I don’t know if is online by wifi or wired.

any easy tutorial on how to set it up with the static IP, I have the asus RT-AC66U router.

any easy tutorial on how to set it up with the static IP, I have the asus RT-AC66U router.

Same one I’m using. Bring up the router admin interface in your web browser.

Click on “Lan” under “Advanced Settings” on left side.

In the section just below. click the popup button in the left column. Find your Tablo’s MAC address in list. Set the IP field to something outside your DHCP range, which is listed in the upper section of the page. Mine is set to do DHCP from .100 to .199, so I use .200 to .250 for reservations. Then click the “+” button.

I selected the tablo MAC from the drop down list and the IP came up automatic.
But I don’t see where to setup the DHCP range.
Or you mean just change the last number to something higher than .254 and then click the + button.

But I don’t see where to setup the DHCP range.

On that DHCP Server tab, the first section is “Basic Config”. Can you change that .254 Ending Address to .199?

Or you mean just change the last number to something higher than .254 and then click the + button.

No, don’t do that. You can only use .2 to .254 unless you change other settings, and I do not recommend a novice do that.

yes it allow me to change it to .199 should I change it and save it like that?

thank on the second part I wont mess with the tablo IP then.

I though you say to not do that, I guess I did not explained it right.
if you don’t mind waiting a few min I will upload a photo of how it look.

also would it make a difference if the tablo is wired or on wifi?

This look right?
next step hit the + button, and then APPLY 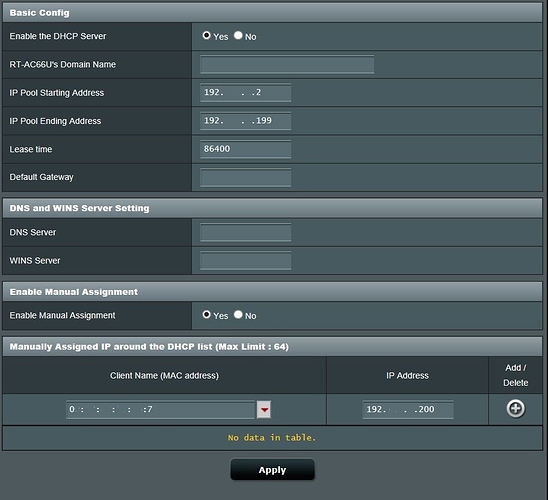 If those are actual network addresses in those fields that you’ve just erased to post the picture, then yes that’s correct.

thank you,
yes I just did a quick edit on those boxes.
but just to make sure the tablo ends in .83

wow sir, everything seem to be working like it should now.
thank you so much.

I don’t get why before going to all this trouble it was having a hard time connecting.
I guess tablo is designed to have a static IP.

If I go wired now would I have a hard time again?