How to migrate to a bigger drive?

Note:. these are just “maybe”,. I haven’t tried any myself - but the remote possibility may exist.

I just stumbled across my old about the possibilities of recovering shows from an “off-line” drive aka dead/no tablo. Here’s and updated post I have regarding the topic… if by chance it helps anyone someday -

Occasionally there’s a great misunfortunate when a tablo dies… yet users can still access their drive and just know there are shows on there they’d like to salvage. --then there are those who think they know what they’re doing venture in to trouble shooting and loose the internal DB while the drive is still intact with no way way to salvage their recordings. Now I’m sure there are users and/or developers here who could do a better job understanding (researching) and explaining this and perhap…

First, I tried to move over the external drive ( https://support.tablotv.com/hc/en-us/articles/213345486-Moving-your-recordings-to-a-new-Tablo ). This failed, partially, because I didn’t reset the 4-Tuner at first to copy its database. Thankfully, Tablo Support was able to fix that for me by running some sort of maintenance script on the Quad after I gave them remote access.

After that, I powered down and attached both old and new drives to an old Dell running Knoppix (bootable Linux). I was able to use the https://gparted.org tool to copy the ext4 partition from one drive to the other. The new internal drive (an SSD) worked in the Quad as though nothing had changed.

The copy was made easier because a) the new drive was preformatted by the Quad thanks to earlier, failed attempts, and b) it was exactly the same size as the old drive. I suspect neither of those were strictly necessary, but can’t be sure.

Thought I would share that I was able to use this approach to migrated to a bigger drive this weekend. Had some initial trouble that I am now chalking up to a bad USB cable. Once I figured this out, it was pretty easy. Because of some of the concerns about Ext2FSD on Windows 10, I pulled out an older laptop running Windows 10 Home instead of using my primary PC. I downloaded the 0.69 version of Ext2FSD. I connected the old hard drive using my good cable. I was able to assign a drive letter in Ext2FSD and then copied the contents of the REC folder over to the Documents folder on my laptop. Then I removed the old hard drive and connected the new hard drive which I had already connected to my Tablo Lite unit for formatting. I assigned a drive letter and then copied everything over to the new hard drive’s REC folder. I flushed the cached data per instructions, then reconnected to my table unit which was powered off. Powered it up and had everything that I had copied over. Thanks for the instructions. Worked great.

I am trying the BabbleBits procedure from post 6/123 using Ext2Fsd and am stuck at the above step.

I do see there are /pvr directories having the REC directories inside them via Ext2Fsd, but the utility does not seem to allow any copying.

Any ideas what I may have missed ?

I punted on the Ext2Fsd.

I was able to download the Paragon Software for EXTFS on Mac to successfully copy over the /rec
directory entries on the 1Tb WD Elements drive to the 5Tb drive. The Free 10 day trial accepted all usage capabilities from what I could tell. This was about 931Gb of material and it took all night. Both USB ports and drives are 3.0 but I suppose my transfer speed was limited by the read speed of the older 1Tb source drive.

FWIW, this took about, and im guessing, 8 hours to do the copy.

Notes:
My Macbook was limiting how many objects I could copy as a group, and overall performance through the Mac-Finder was very lethargic at best in trying to instigate the activity.

The easiest way to do this is to open two finder windows side by side, one for each drive and drag from one side to the other. Just dont forget to “mount” both drives and test a drag/drop of a single directory object before you increase the size of the group of objects you are transferring.

When you believe you have completed the entire copy, I recommend you compare the number of objects and the sum total of the space of the objects to validate nothing was missed anywhere.

Direct documentation related to this exact process is scant so you will may have to fumble around before you see what works.

I just plugged in the new drive… my random selections of recording play. The Tablo App seems to be operating normally. I’m Good !

Good luck to those looking to walk down this same path.

I successfully completed the transfer of 1.9 TB of programs (2,607 file folders) from a 2.0 TB Western Digital Elements, to 5.0 TB Seagate using BabbleBit’s 14 step procedure listed in his Jan 2015 post. It took a long time, about 60 hours total, but it worked! If I were to do it again, I would make sure I was using a computer with two, USB 3.0 ports. My little Lenovo Yoga 2 in 1 laptop (Windows 10) only had one 3.0 port (and one 2.0 port). Below are the pertinent details to my transfer. (These are in addition to the procedure from BabbleBits.)

Again, all worked normally when I plugged the new drive into the Tablo. All the recordings were there, and I now have 3TB of free space! Thanks to BabbleBits for the great instructions. After seven years it is still a great reference!

Thank you for the Informative step by step.

I’m not sure if this will help, but this is what I am doing today. I’ll let you know how everything works out.

I’m a Linux user. I currently have Ubuntu installed on my PC. These are the steps that I took to access the files with sufficient privileges to copy them to the new drive.

I have a ticket opened with Tablo on the issues that I’ve been having. I’m losing HDD connection daily. I ran a few utilities on the old drive and it does look like it has some bad sectors on it, so I bought a replacement drive. I’ve sent email to the person who has my ticket asking if other directories need to be copied over or if simply copying the rec directory will be sufficient.

The following advice may come too late for you, or may indeed be unnecessary. Do let us know how it goes!

I took your advice and stopped the copy process. I put the old HDD back on the Tablo and reset it. I tried to copy the data from the old to new using gparted, but the old drive stopped responding. I took it out of the USB enclosure and removed the USB interface and installed the drive into my computer. I’m currently in the process of copying the partition using gparted. It’s been going for a number of hours now without any issues. Still quite a while to go, but it’s looking better. I’m thinking that the USB interface has gone bad and that was the cause of the issues I was having with the Tablo losing connection to the HDD.

Thanks for the advice. I’ll post here again once the copy has finished and let the forum know how it went.

After about 30 or so hours, looks like I’m back in business. gparted skipped a number of blocks on the old drive with an I/O error - unable to read data in block. I’m not sure if any issues will show up as a result of that, but so far so good. I’ve connected the new HDD to the Tablo and it looks like everything is there and the recordings that I’ve selected have played just fine.

I took it out of the USB enclosure and removed the USB interface and installed the drive into my computer.

That’s how I do it myself. The extra time it takes to remove the drives is more then made up for by the extra speed when dealing the big drives although it’s likely I will not transfer contents to my next drive because the files I want to keep are already backed up to Plex.

I’m surprised I haven’t heard of anyone creating a bootable USB or a RPI image to facilitate the data transfer. It would be the simplest possible solution for most people. Particularly a RPI4 with USB3. For around $50 all in that would make a nice standalone device to transfer the data. The transfer takes a long time over USB so you might not want to tie up a laptop or PC for 2 or 3 days. lol

EDIT: Probably $60 all in due to chip shortage price increases.

Or you can use one of these. It will do a copy sans computer. I’m not sure if you would need to extend the partition after the copy to take advantage of the additional capacity. 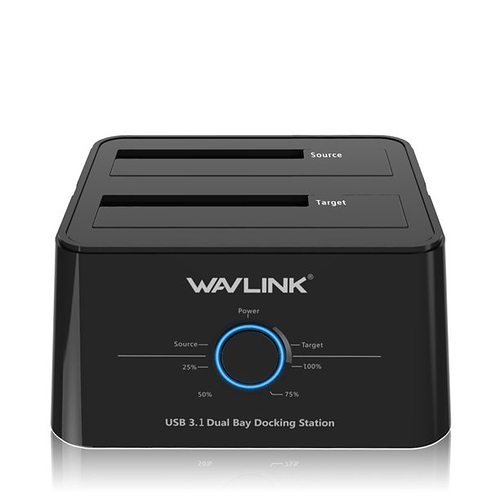 Way easier then the recommendations we often see for people to do it on Windows!

One big issue that I was having when I tried to image the old drive to the new one USB to USB was that when gparted encountered a bad sector on the old drive, it would time out and the imaging would be halted. Once I installed the 5TB drive into the computer, when gparted encountered a bad sector, it would halt, but eventually skip that sector and move on. I’m sure that I’ve lost data somewhere, but I haven’t had any issues with the new drive on the Tablo yet. It’s been several days and I’ve been DVR’ing quite a bit. The Tablo has not lost connection to the new drive and I haven’t had any issues with playing back old recordings - yet.

On the plus side, I have a 5TB drive installed in my computer and now have a backup routine scheduled weekly for my EIDE raid enclosure. The drives in the raid enclosure are aging too. I’m thinking about replacing them as well, so it’s nice to have a drive large enough to hold all of the data on the raid enclosure just in case.