When i watch a Live or Recorded program on my Nexus 5 Gen2 (as well as my Samsung Note 8.1, Nexus 7) and then casting using Chromecast Gen 1 I notice that the CPU usage on my Android devices remains very high.

This is my network configuration (LiveTV setting at 720P@5Mbs as recommended):

I use the “Coolstat” CPU/Network monitor from Google Play (https://play.google.com/store/apps/details?id=ds.cpuoverlay) on my smartphones/tablets and it display the CPU usage in real time at the top edge of my smartphone.

From the attached image you can see that the the CPU usage on my N5 is very high even AFTER the program has being Chromecasted.

From my understanding of the Chromecast implementation there should be very little handshaking going on between my Nexus 5 and Tablo once the video stream has been casted. The handshaking should be so minimal that one should be able to shut off the smartphone/tablet and the casted video will be unaffected (at least this is how it works on all Chromecast-enabled apps I use). So I don’t understand why after I chromecast the Tablo video stream from any of my Android devices why the CPU usage is still so high on my devices. They will even get hot to the touch after about 30min. See attached image: 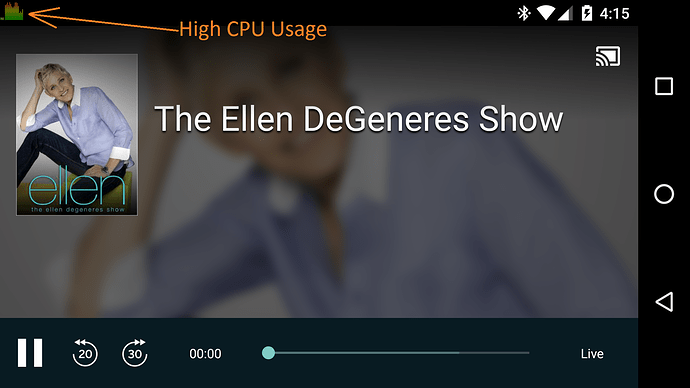 Interesting - why not get a Nexus Player or Fire TV which have a standalone Tablo app and save your phone from burning up?

Because i’ve got 3 TVs and they each have a cheap $35 Chromecast… which is the whole idea behind Chromecast.

They’re product is advertised to work … it’s not advertised to say “Might work with Chromecast… If it doesn’t go out and buy a new Fire, Roku, Nexys Player”

I suggest they should fix it… Chromecast is definitely not being implemented correctly.

I agree. Unlike Roku who releases broken firmware regularly, this seems to be a problem with the way Tablo implements Google Cast. Hopefully they fix it. I would still recommend a Nexus Player regardless, they are awesome for the price.