Has anyone solved the buffering issues, and WHY doesn't Tablo fix it?

I just got the Tablo Quad a few days ago (Jan. 5, 2023). As of today, Jan. 8, I’ve spent hours searching for a solution to the buffering and 2 minutes actually watching TV. I can clearly see I am not the only one with the problem. I’m trying to use it with an Amazon FireTV Stick 4K (and a couple older models). All are up to date. All buffer, even my Gaming PC (not a bottom end machine!).
All the posts are either old or point to “your home network is the issue”. First, I have a hard time believing that my network is the issue. I’ve got excellent signal, the livingroom TV is less than 10 feet from the router and literal line of sight to the router. I’ve tried all the tricks, lowering the picture quality (which seems like turning off features I paid good money for), disconnecting the Hard Drive (again, throwing away money), etc.
Second, IF it is my network, none of the posts explain ways to improve it to fix the issue. At least that I found or be appropriate for my network. Further, my ISP provides the router, so I’ve got what I’ve got. It’s an Aris NVG448B Version: 9.3.0h3d36. Buying a new router isn’t in the cards. A few posts suggested buying a new power supply. It’s a NEW device, the power supply should be fine, or their Quality Control is severely lacking.
I sent a “request” to Tablo Support a few days ago and have only received a robo message that they got the request.
I used to work in IT, so I have a little knowledge about networks. Not that I’m a network engineer, but I do have a rudimentary understanding. I can’t find any issues with my network.
I’m really not impressed with this thing. I thought the device I’m replacing was garbage, this is just a different landfill.

I use a very old gen 2 fire tv stick and 5G WiFi into a 10 year old router 15 feet away. I only record at 720p and my tablo is wired. And I don’t have any buffering problems.

Maybe I need to find an OLD Tablo! BTW, my Tablo is wired direct to the router too.
Cheers

Sounds like you’ve tried everything! Is it possible the router has some QOS limitation on the port(s)?

I’ve tried all the tricks

Did you try plugging the Tablo in hardwired to your network? Perhaps eliminating potential issues, like your Wi-Fi’s potential variability, might be a good place to start. You might even try connecting a PC client hardwired as well, which would tell you if the buffering is network related. If that works, leave the Tablo hard wired, and try the wireless client.

I’m really not impressed with this thing.

Tablo Warranty and Returns | Over The Air (OTA) DVR | Tablo

Tablo's Advanced Features Set It Apart and Make It A Great Choice For Cord Cutters. Visit Our Website For More Information On Our Our Warranty & Returns Policy.

End-User Customers who buy Nuvyyo’s products directly from Nuvyyo, may return them to Nuvyyo up to 30 days after they are received for a refund of the product purchase price (we cannot refund shipping charges).

All buffer, even my Gaming PC (not a bottom end machine!).

This morning I was streaming the news via my tablo, watch with the web app on an antiquated Dell Latitued D820 with a T7200 Core 2 Duo - with out issue. Although my network is significantly wired, a Netgear R7000 has been on the market since 2013, technology wise, ancient. My antenna is +30yrs old, likely if one was labeled “HD” it meant heavy duty. I’m 40-60 miles away from any towers living in a rural area surrounded by trees and stuff. My cable run is split between 3 TVs and 2 tablos.
**I believe “they” fixed it.

It is hardwired to my router.

I believe QOS is turned off.

I’d give them a chance to respond to your e-mail, or maybe @TabloSupport will see this. But, don’t send another email. With the system they use sending another email will put you to the back of the queue.

Does your Tablo work on other devices? (PC, Phone, Tablet, etc)

Funny as I have 2 Tablos and don’t think they ever buffered much except when first changing channels. Been very solid or I would not have bought a 2nd one. I have mine connected via ethernet as this is one of my main sources of entertainment, so I wanted it as solid as I could make it.

My “guess” is the Tablo is faulty or something in your network is causing a problem as you said you were connected ethernet. I use FireTV Cubes mostly, but also have a FireStick MAX on the bedroom TV. I have Fios 300/300 and this Nighthawk router. 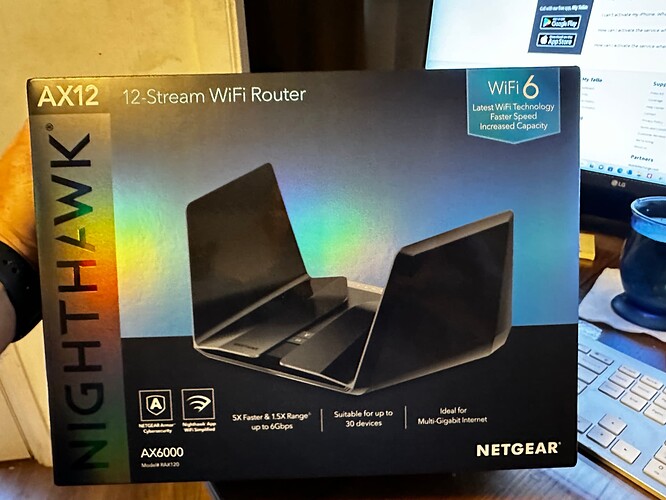 Did you add a “new” HD or reuse an old one? Only asking as I once pulled an old HD out of a drawer

and had some issues, so I bought a brand new one and things been better. I bought the exact one that Tablo recommends on their site for these.

Also what is your internet speed?

Same here. Hardwired Quad, New HD, R7500 (although not in the equation), mine splits the recordings. See RE: Tips & Tricks for Working with Tablo Support for more info. Internet speed really has nothing to do with it, except maybe the guide, which I have noticed is slow as Xmas,

In my experience, buffering issues can be due to the client device. My Tablo Quad is wired ethernet direct to my Router recording and streaming at “HD1080 - 8 Mbps” and I currently have three TVs with three different client devices: a Roku Streaming Stick+ using WiFi, FireTV Stick with an ethernet adapter, and a Chromecast with GoogleTV using WiFi. The FireTV Stick and GoogleTV replaced an older Roku stick and Roku express, which I would occasionally see buffering on. Of the current setup, I typically only see occasional buffering on the FireTV stick. I got the ethernet adapter for the FireTV stick to address occasional buffering thinking it was network related, but it still happens, mostly in the first few minutes of a stream. This makes me think it is more likely a lack of resources on the client device. The FireTV stick is one of their basic models, I think it was on sale for under $20, so it probably has less memory and a slower processor than the other devices, which would also be the case for the older Rokus I no longer use. Hope this provides additional insight.

I am curious why you say “buying a new router isn’t in the cards”? I have owned my own internet equipment for years, and by choice use a separate modem and router. My buffering improved greatly over the last year or so as this equipment was upgraded. There is no way of knowing how good the ISP equipment is for your needs. Buy your own and the lease vs buy payout is about a year or so. I don’'t think Tablo is your problem.

Not any better than via the FireTV stick. Still get buffering.

It is an old one, but it’s the one Tablo recommends. I don’t think this is the issue; I disconnect it and still get buffering.

I really don’t want to buy another piece of hardware, first of all. Second, I’m not sure I can do it with the ISP I use. I upgraded about a year ago which includes an VOIP phone line. My phone goes through the router and I don’t think I have access (or skillset) to move it to a new router. It can probably be done, I don’t think they can prevent me from owning my own equipment. It adds another layer of complexity though.
Appreciate the advice!

I’d give them a chance to respond to your e-mail, or maybe @TabloSupport will see this. But, don’t send another email..

You’ve got a lot of replies that I have not looked at, so forgive me if you have an answer. I bought a Tablo quad late '22. And I had a host of buffering problems. These are all fixed now. All it took me was $$$. And I am not sure what of the legion of things I did fixed the issue.

I had buffering both in playback and live TV. I am not sure of the order, but I replaced the router and hard wired the Tablo to the router. This fixed buffering issues when I used the app on my phone. But I was still getting buffering on my roku streaming device.

I added a WIFI extender since I needed better connectivity in my garage. Connecting Roku to this did not help.

I decided that I was going to need to hard wire the Roku, but my player did not have a hard wire option. When poking around, I found that my Roku device seems a bit long in the tooth. I upgraded it to a Roku 4k (since it had a hard wire ether option). and with that, buffering had been fixed. I never did hard wire the Roku, but Roku setup was stating that the wifi signal strength went from poor to excellent.

Think about it: Plex is a local network streaming application. I use it. It was completely capable of streaming a file on a hard drive, using an old router and an old Roku. But not Tablo, because (I’m guessing) there is no pressure on the developers to efficiently stream.