For the last two days, the channel information for WBKW MYS 7.3, and WBKW GRIT 7.4, have been swapped.

This is also a problem with the Tablo Dual HDMI.

I have updated guide data on the both, the QUAD about four times. 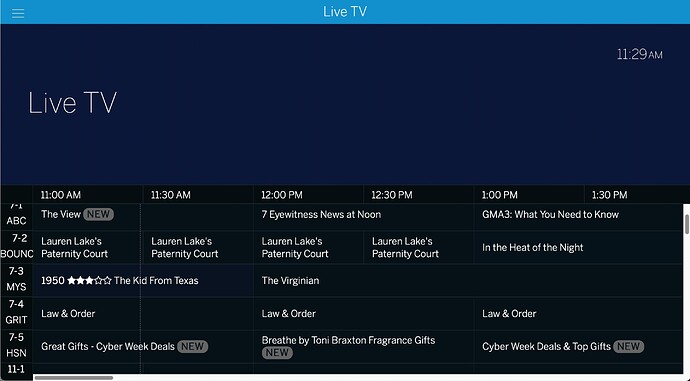 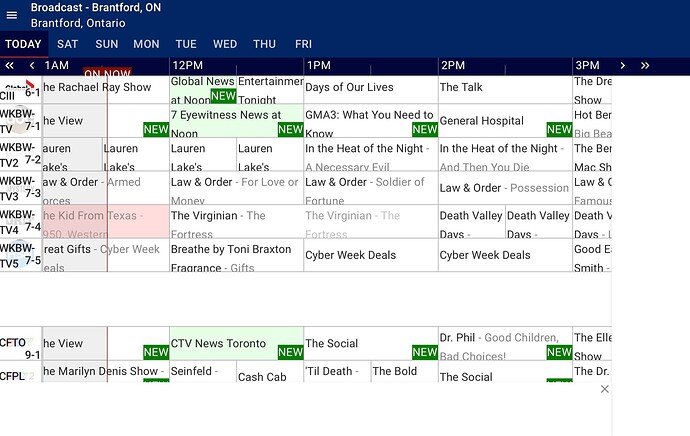 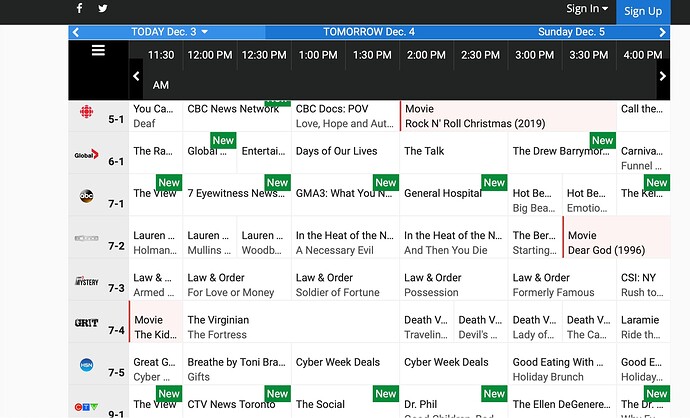 If you remove these channels from your guide, and then run a new channel scan and re-add them: does the issue remain?

If it does, send our support team a note and we can investigate further.

I’m not going to run a new channel scan, because when I did it the last time, I got a good catch. And since this PVR will not retain previously found channels like my present and previous TVs, and my ePVision PHD-VRX and Channel Master DVR+ PVRs do, I won’t.

Again note! The same problem is on two different units.

Those 2 units are configured with the same zip code, correct? Assuming so, why would you expect it to NOT be seen on both units? The guide is based on zip code and there is a chance this a guide problem.

And why are you not running a new channel scan? You want to do that periodically because particularly with the transition to ATSC 3.0 some existing stations will be changing the frequencies of their ATSC 1.0 transmissions.

What do you mean by will not retain previously found channels? If you mean they no longer appear after scanning, that sounds more like reception fluctuation.

No, it is not a reception fluctuation when a Tablo PVR refuses to keep every found channel.

Unfortunately, it’s a well known fact, that Tablo units do not retain previously found channels, whenever a new scan has been performed.

I find it disconcerting that you don’t appear to realize it.

If I want to find out if there are any new channels, or channel changes, I always use either the TV, or the Channel Master+ PVR, for the very reason that I stated in my original post.

The two channels in question, are correctly receivable on both the TV and Channel Master+, and they are not equipped to receive ATSC 3.0 transmissions.

Clearly, the issue is not at my end, and is obviously a guide problem.

That was actually my point. You seemed to point to it being a Tablo unit problem, when actually it’s likely just the guide provider needs to be told to update their information for your zip code. That’s something you submit a ticket to Tablo to have to done but it’s actually done by their guide provider, not Tablo.

What do you mean by “refuses to keep every found channel”? If you have channels appearing and then disappearing when you scan and it’s not a frequency change, it may still be an overall reception issue based on season, weather, trees, etc. between scans or something like that or flat out a Tablo having a hardware problem, but generally, that’s not how it works.

The only times I’ve had channels change when I scan is when there is an outside factor (like a nearby station has gone to lower power because of equipment failure) or when they are changing frequencies for the ATSC 3.0 migration.

That’s not what should happen, as evidenced by the factor other DVRs don’t do that either, so your expectation is correct, seems something else is going on. I’m just telling you I don’t have those problems with my Tablo at all.

Hi Cliqueofone, I had the same issue. I rescanned and the channels and once guide data updated it corrected the info.

I did not specifically point out that it was a Tablo unit problem, when I made the original post, “Guide data swapped on two adjacent channels”.

Also, I clearly stated that the problem was exactly the same on another Tablo unit.

I clearly understood at the time, that it was not a fault with the Tablo units, and was a problem with the guide supplier.

That should have been it, and I expected Tablo to promptly rectify the problem, since I have paid, and I’m paying yearly, for any and all, bells & whistles for two Tablo units.

I clearly gave a distinctive reason why I did not prefer to do a rescan.

Again, that should have been all that was required from my end, and anything about opening a ticket, should have have mentioned.

Perhaps I should have stated that I’m a firm believer of rotors for TV antennas, and they have always worked for me on my TVs, VCR, and the two PVRs mentioned in my second post. The rotor only became a “Problem” after purchasing a Tablo PVR.

As for why, I wasn’t into doing a rescan.

An excellent thread that mirrors my reasons, and I have pasted the comments of other members.

I’m having the same problem that channel 8 (ABC) and 4 (FOX) don’t always appear when I perform a Rescan, even though when they do appear they have 4 dots of signal strength, and if I attach the outdoor antenna to a HDTV they register 5 bars of signal. I wonder if the Tablo has a problem to “too strong” a signal?

Full Channel Scan:
Scans for all channels.
Re-scans should not delete list of previously scanned channels, it should just add new channels to the list.

“…signals all from different directions, and do not want o re-scan every time I rotate the antenna to watch a different channel.”

“This thread is about the feature or ability to manually add channels without performing a scan.
The scan function forgets previously scanned channel every time you run it.”

“When I Rescan, my antenna is pointed in one direction. So it picks up some channels. But if I point it say 90 dogs from there and rescan, I get some new ones and lose old ones.”

I always chuckle whenever I read this.

Learn more about the OTA antenna setups to pick (and which to avoid) to help you tap into signals from multiple local OTA TV broadcast towers and maximize the number of OTA TV channels you can watch.

What to Avoid: Antenna Rotors (or Rotators)

“…it’s a non-starter when using a DVR, or even some digital TVs.”

This is nothing more than a copout, and the solutions provided would make for either substandard reception, or no reception at all, when compared to my 25 year old rotorised, deep fringe VHF-UHF-FM combo yagi antenna.

Not only does Tablo have the rescan idiosyncrasy, it has the weakest tuner.
And not having a built in signal strength and quality (SNR) display, makes troubleshooting reception problems a hassle.

Well, I bit the bullet, and against my better judgement, I did a rescan.

And as usual, Tablo did not retain previously found channels.

Fortunately, I used the two channel unit, which is basically a backup unit, and somewhat limited since it isn’t networked. From a previous scan when about 55 channels were found (Was a good day and time), the best the Tablo found this time was 35 channels. Now to wait for another excellent scan time.

Oh, and by the way, the rescan was an absolute exercise of futility.

The guide data is still swapped on the same two adjacent channels!

Again, that should have been all that was required from my end, and anything about opening a ticket, should have have mentioned.

Once your Tablo has run its channel scan, the Live TV guide will show 24 hours of guide data. The remaining 2 weeks are sorted into the TV shows, Movies and Sports tabs. If your Tablo is missing gu...

This support article tells you exactly what to do if you think it’s missing/incorrect guide data.

Cliqueofone, I just remembered to fix mine I scanned it twice. The second time once scanned and guide data downloaded was correct. 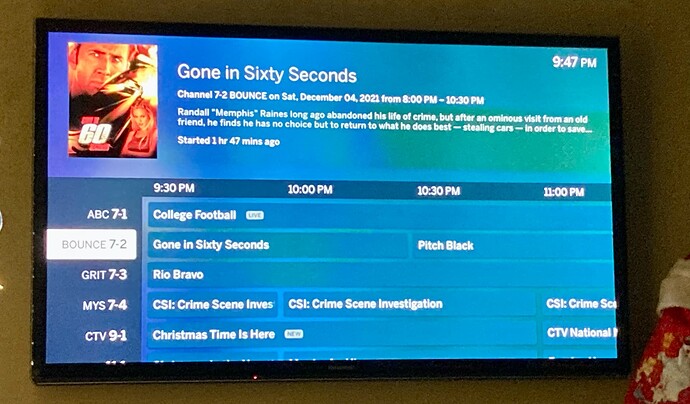 I rescanned three, maybe four times, before I made that last post.
I’ve sent in a ticket.

Now is where it gets really interesting.

It was successfully recorded!

Yet when I check TV Passport and TvTv.ca, it still shows that the movie is actually on 7-4 Grit.

I’m now recording The Horse Soldiers that is shown in the guide as being on 7-3, but is actually on 7-4, as shown on TV Passport and TvTv.ca.

That is strange. I wonder if it would be postal code differences?

I’ve had this weirdness: 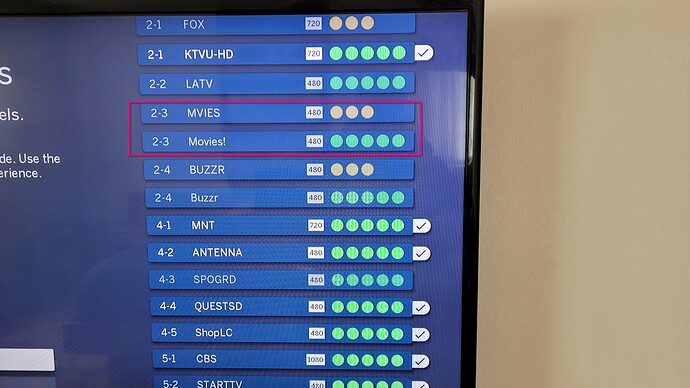 But after saving it changes to a different network and the wrong guide info: 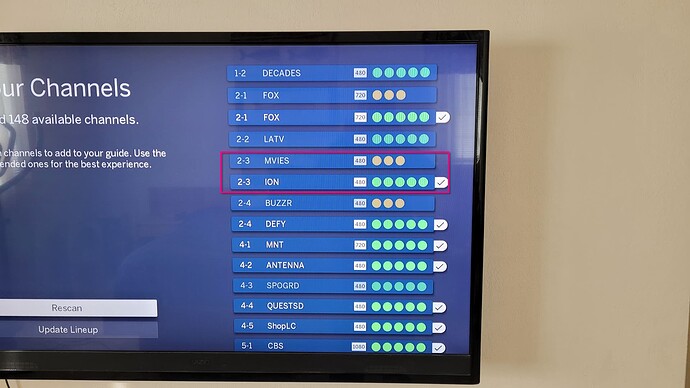 FYI - In my area because of the hills I can receive a station from the primary transmitter as well as a repeater hence the two 2-3 subs.

IMHO - Feels like a software bug in the channel scan.

If I had previously known that I could still set up recordings, I wouldn’t have even bothered to start this thread.

As it stands now, since the programs that I wanted to record, are in fact being successfully recorded, I’m able to live with the screwup.