Thought my tablo was flubbed up (or ad/tracking blocking - all disabled). Yes cleared all site data and reset settings. 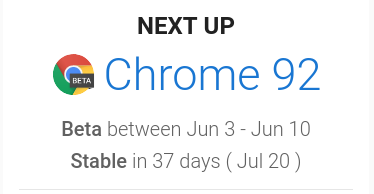 Almost all areas have ended the various lock downs.

When possible almost everyone has come out of their caves into the sunshine and fresh air and resumed living like humans. Employees might have actually gone back to their normal work.

They aren’t fundamentally the same?

With their limited customizations, other than tablo access and a handful of sites, I avoid using it.

Correct… however it’s the Chrome 92 BETA that is causing the Tablo issue. Every earlier version of Chrome works fine.

Also, the OP states that it does not work with Microsoft Edge Dev Build 93 either; so yes, they are fundamentally the same. Beta=bad for Tablo, for now. lol

They aren’t fundamentally the same?

oops, there’s a typo in there…

Aren’t they fundamentally the same - Edge is built from Chromium - Download the new Microsoft Edge based on Chromium - Designed for data collection and advertising revenue.

Actually Firefox works great for tablo, just have to spread things out. In the days of flash and DRM some streaming didn’t work in Firefox, so I just have Chrome opened for Amazon Video, and a tab for tablo.

Thanks for confirmation, it’s not just my system.

I have not tried Chrome 92, but Chrome 91 is giving an issue notice, that clearly indicates there will be an issue when it is released to stable:

A site requested a resource from a network that it could only access because of its users’ privileged network position. These requests expose devices and servers to the internet, increasing the risk of a cross-site request forgery (CSRF) attack, and/or information leakage.

To mitigate these risks, Chrome deprecates requests to non-public subresources when initiated from non-secure contexts, and will start blocking them in Chrome 92 (July 2021).

To fix this issue, migrate the website that needs to access local resources to HTTPS. If the target resource is not served on localhost, it must also be served on HTTPS to avoid mixed-content issues.

Given the (near) impossibility of trusted HTTPS on private / home networks, I suspect this change is going to cause a number of issues, not just for Tablo.

Using Chrome so little, I can access my router, by name or IP via HTTP no S - but is does not have mixed and access directly. Thought maybe it was an HTTPS only forced setting.

So maybe tablo can suggest user take up FIrefox

and tweak their filters, screen and features to work with a browser which works with their device

Security guidelines can help someone produce security policies, enabling and/or disabling to suit. Can be used to keep things safe and practical.

Security mandates are similar, except it’s like a dark dungeon, a prison where you keep people you hate. But other than that… same.

There is probably a reason to not always automatically upgrade like a bunch of lemmings committing mass suicide. Especially since the CSRF has been around since at least 2001.

Chrome has some updates to share about the standardization of the Private Network Access - formerly known as CORS-RFC1918 - plans to restrict private network resource accesses, and how your websites can align with those changes.

…or maybe tablo with load the “webapp.js” on the tablo and use it’s internal web server - so it could then be access without the need for internet! woohoo!

Other companies selling devices, advertised as accessible via browser - but suddenly not supporting browser access. Chrome is “recommended” and, currently, tablo is accessible via other browsers (for now).
If they come out with a “company app” for the devices sold to users relying on the web app? …or discontinue web app and obsolete access?

Nuvyyo has been and likely continue to be a leader, not a follower with DVR technology and the industry.

Ever use the Kasa(tp-link), Wyze, Alexa, Blink, etc app in a browser? Many of these don’t even have a stand alone PC app.

There are even companies with mobile apps that have deprecated various OS versions leaving a legacy app with no future features, enhancements or supporting new products.

But life goes on.

Yes, off to another pointless off topic posting… tp-link, never had it, knew it up front. Alexa, try alexa.amazon.com . Data collection works best with proprietary software, it’s no secret. If you want to know when someone comes and goes from their house daily, you need control.

I’m aware of engineered obsolesce and companies, devices and technologies becoming defunct. Not functioning with one vendor’s browser doesn’t render tablo useless for PC users… who purchased it with that purpose.

Whether it was a new design in beta testing or just something flubbed up this build has my.tablotv.com loading.

Yes, you are correct!