I believe this has more to do with PBS and how they provide data, but… Previously, PBS would never list shows as “new”, even when they were. Kinda a PITA when every other broadcaster can do so, as I like to avoid recording repeats. Then, they finally did start listing shows as ‘new’, EXCEPT they list the same show as new a bunch of times as they repeat them. How crazy.

Just curious if anyone else is experiencing this with PBS?

Also in PHX. It is weird. Here’s an example. Kind of random as to which they decide is new beyond the very first airing… 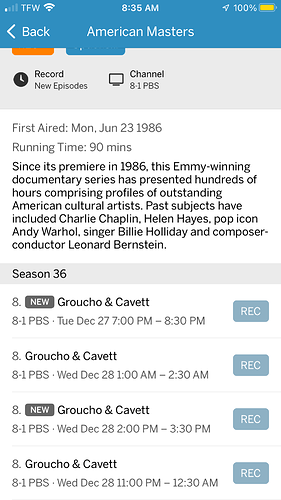 Doesn’t the designation of “new” come from the schedule supplied by the station?

Samething with the Oklahoma City PBS station. Some series have multiple cases of the same episode marked as new while other series have no episodes marked as new even though the detailed episode information shows a first aired date in the future.

No matter where you live this is more common on the PBS network. I have those 4 episodes of season 36 episode 8 but only 1 is marked as new. But at my age I probably saw the original groucho visit to the dick cavett show.