Gaps in EPG? Can anyone help?

My Tablo is able to pick up 24 channels from Toronto and buffalo. I live in the Burlington Ontario area. Four of those channels however have no EPG data in the Tablo Live TV UI:

I tried disconnecting my devices (ios, Android, Android TV) from the Tablo and re-synching, and also re-downloaded the EPG. Nothing works.

Can anything be done to fix this? Or do those channels just not publish any EPG data ? I’m hoping that’s not the case , as that would negate the DVR capabilities of the Tablo. Here is a screenshot: 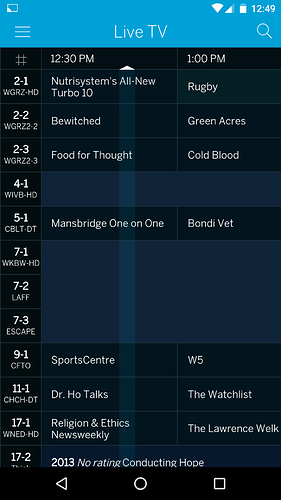 FYI - these four channels were added to the tablo after I repositioned my antenna today and did a re-scan (it didnt detect them before). Could that be the reason? Do I need to reset my tablo to factory defaults and do a fresh channel scan + EPG download?

You in Canada, those are American channels - try another nearby postal code. May a Toronto one.

Call tech support after 9:30 am tomorrow and give them the stations and your zip code.

In the meanwhile check out www.titantv.com to build your list and you can do manual recordings. I’m afraid if you put a us zip you would lose guide data you alreadd have, but you could try 14200.

I put in my Burlington home postal originally. I’ll try an alternate postal (perhaps a US zip code in the Buffalo area. Stay tuned

Plugging in a buffalo zip code (e.g. 14200) on a tablo restored to factory defaults results in the table not finding an any antenna connection at all. weird. Tablo only seems to like canadian postal codes.

Seems like the problem is an EPG issue on tablo’s end. Even after upiing a fresh EPG after a factory reset, the affected channels are still blank with EPG data

i opened a support ticket via tablo’s website and linked the ticket to this thread. I think the problem is on their end and they just don’t have the EPG data for the affected channels for my postal code.

I did try the 14200 trick. Didnt help. Matter of fact, tablo doesn’t like that zip code at all on a fresh factory restore.

I have those said channels with EPG guide data in Toronto. Try M5H 4G3 for the postal code.

My guide has been doing the same thing for the last few weeks. It seems it coincided with a minor update - maybe the Roku or web interface - I can’t remember exactly when. Also after a channel scan but they do eventually fill in. Another change since that update was the diagonal lines in the guide seem to be a lot more prevalent when first accessing it. I can scroll down after the guide data loads and then scroll back up and there will be blank areas with the diagonal lines. These fill in again eventually but before, once the guide loaded, it stayed, even after going to a program and then back to the guide.

Your tip worked! I have a fully fleshed out EPG now. No gaps whatsoever! Thank you for the tip

At any rate I’m glad I still opened a support ticket so Tablo support can resolve this for other people in my neighbourhood.