Ok, here’s a weird one. I have a rooftop antenna and receive 38 channels. When I put an amplifier on the antenna, I get 27 channels. Tried two amps with the same results. Now I do understand that maybe the signals are too strong and need not be amplified. Not the issue.

Issue was, when the amp was connected, some channels have audio sync issues. I attribute that to the same fact that the signals must be collected separately and the audio arrives before the video.

Strange, but I mention this for anyone experiencing audio sync issues for some trying to reason why that may be happening.

For anyone wondering on why I used an amp in the first place, I was trying to pull in a tower 35 miles south of me. I was never successful getting that station. Shame because it is the CW Network and I watch that a lot. Think I may try a different Antenna. The one I have is one of those plastic multi direction ones which wouldn’t hold up anyway in the Arizona sun. Problem is the spacing on the towers. There are three I want to get to. One is south (35 miles), one is north (14 miles), and one is west (21 miles).

Anyone got any suggestions for a good antenna?

If you need an amplifier just for one channel, take a look at Jan Jenca:

For around $40 to $50 he can build a custom amp for a specific channel and leave all the other channels untouched. People have ordered selective amps and combiners from him (including myself) - good products.

Didn’t know selective channel amps existed. Will contact them. Thanks

Now I just found out that the channel I want is being repacked and moving from RF 44 to RF 21 next month. Not sure if that impacts the digital channel. Have to do more research on that.

Right, the amp deals with the RF channel (21) not the display one. Mention also the frequency (512-518 MHz) because in Europe the frequencies are slightly different from the North American ones.

Also ask about the power injector - what is needed.

I’m in the same boat - I have a selective combiner from him and one of the channels is being repacked next October - will have to order a new one from him. 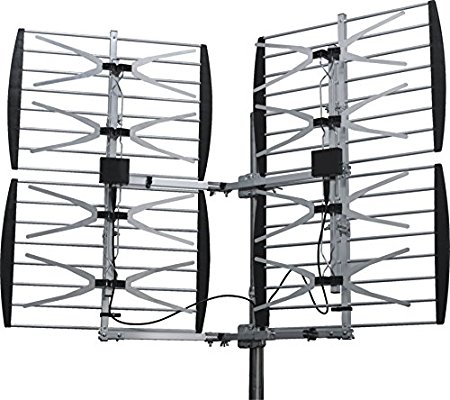 Have stations in multiple directions? This antenna allows for your to point each side in a different direction to ensure best reception! Engineered for Enhanced Durability!

Point one antenna to the south the other one to the west, hopefully you should be able to get the north channels fron the one pointed to the south.
I have 2 towers where I live and I use the same kind of antenna with good results.

For the panel that is pointed north-south, one could also remove the reflector so that the signals from both directions arrive unimpeded by the reflector.

Wow, Great info. Thanks.
I assume the reflectors are those X shaped parts. Or are they the grills?
I will order one. And as soon as I figure out about the repack channel, I will order the amp. Can’t seem to get any info from the station as to when the change is happening or if they are even broadcasting OTA now. KWBA-TV Tucson.

After thinking about it I concluded the grill was the reflector.
That would be perfect. The North direction is a line of site to the closest tower and the south tower would be the one I am having issues with, so the amp would take care of that. The west tower is a bit further away and I do get all of the south signals now. I ordered that antenna for delivery on Sat. Love Amazon