Failure to record one day of recurring news show

I have a strange issue. We record a number of news programs. I live in the 75028 area of Dallas/Ft. Worth and our ABC affiliate is WFAA channel 8. For the 10 pm news update (the one my wife likes to watch for the next day’s weather), every Monday’s news broadcast is skipped and I have to remember to add it in manually. THe programming is smart enough to know that the later rebroadcast of the show should not be recorded, but it somehow just son’t “see” the Monday shows to record. . 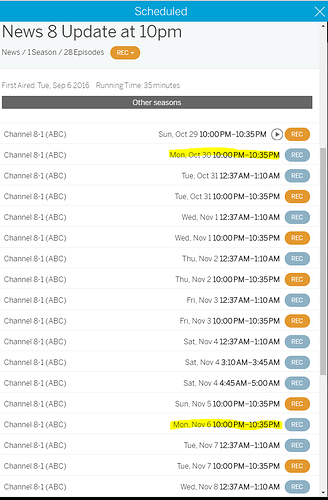 Click on one of those and see what the “First Aired” date is. Since it’s consistent, I’m guessing the data the station is sending to the guide providers is bad.

I should have said that I’m also suspecting bad guide data and that I was hoping @TabloTV would be able to suggest a way to resolve this.

Here are the results from clicking on it. Not much, honestly, since I already knew they were nott airing with the"New" tag.

Sunday show that does get scheduled:

The Monday show that doesn’t get scheduled (this one I unfortunately already manually scheduled):

Tuesday show that does get scheduled:

Here is the pattern of scheduled airings. Noteworthy is that Sundays seem to be the only show that doesn’t get aired multiple times. 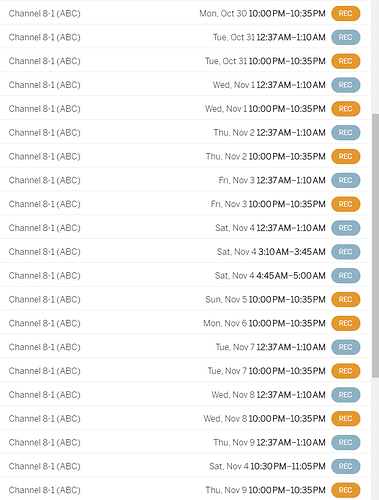 Did you specify the show to ‘Record New’ episodes, or ‘Record All’? It could be that the Monday shows aren’t being specified as ‘New’ airings.

Wow, @TabloSupport you’re on to something there. I think.

I have the show set to record “New” - even though none of the episodes show the “new” tag. 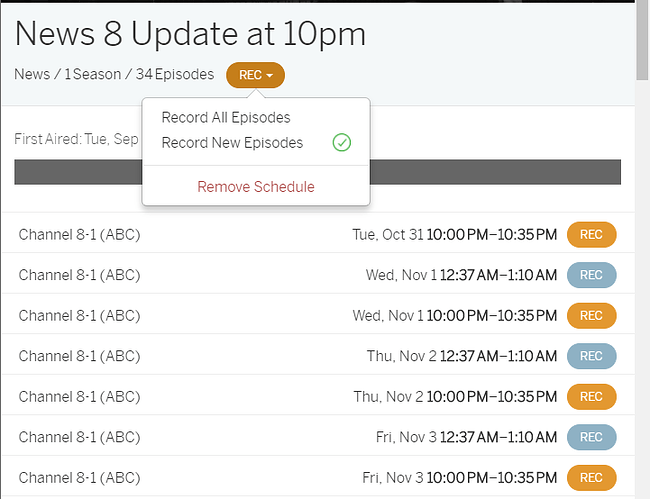 Setting it to record "All: does result in it scheduling to record every episode, even repeats, but it also includes the previously excluded episodes. Now I guess I’m just going to watch if the guide data is accurate enough to NOT record the duplicate airings. 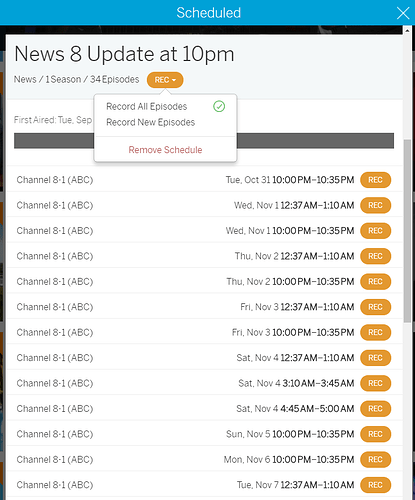 But really, I’m a tad confused - should not the Guide data have a “New” tag to explain the behavior as shown in the first screenshot?