I depend on the signal reflected off an adjacent buildng. I just realized that after battling the NBC repack last May, I have had virtually trouble free reception for 5 months. Last spring I had to make periodic antenna adjustments as trees blossomed and weather changed. Then the repack can along and I played with pre amps and attenuators. I finally found my reflected sweet spot on the adjacent building and for 5 months I have had nothing inline on my antenna coax except an LTE filter and a distrbution amp with very minor signal interference and no missed programs. Except for a couple of reboots, I have been virtually hands off. We will see what the Fall brings.

Great information, that’s some pretty serious dedication there. What kind of antenna are you using? 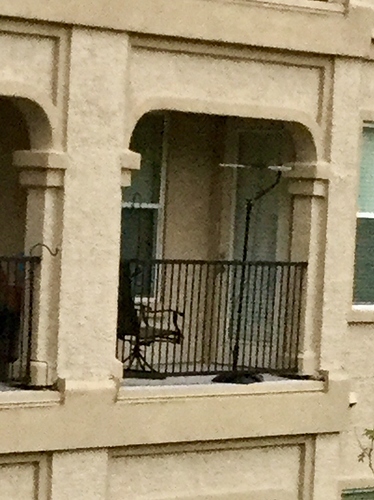 RCA 705e - check my profile for a picture of my setup. Attatched is a picture of the only other antenna in the complex.

As far as I know there is only one other outdoor antenna on the property. It is the simple yogi shown on a balcony behind the trees to my left. I have never been able to contact that person to ask questions but it is what pointed me toward a directional antenna for my situation. I decided that I needed to focus my reception. A Clearstream did not help me, a Channel Master Smarttenna was okay but I had to adjust the antenna every week or 2. I think what I have now, would probably be called a modified yagi. I no longer use my VHF addon element.

Is it ok if I act like a radio nerd for a moment?
Actual mutipath radio waves tend to cause multipath distortion. There problem is the radio waves reach the target at different times thereby weakening each other.

In the old analog days that caused echo in audio or ghosting in images. In the digital world it’s just good old interference. Some digital systems can account for this or even use it like WiFi systems using mimo. With mimo WiFi uses multiple antennas to accomplish an actual increase in bandwidth.

Unfortunately ATSC 1.0 can’t use these mutipath signal’s. So you actually want to eliminate mutipath radio signals or at least attenuate the weak paths as much as possible. You do this with a high gain attenna pointed at the strongest path rather than the most direct path.

Is it ok if I act like a radio nerd for a moment?
Actual mutipath radio waves tend to cause multipath distortion

Yeah but I’m sure the OP mentions “multi path” when they really mean “the best of several indirect” path. Using buildings and whatever else is around to get a UHF signal when direct line-of-sight just ain’t available. Same tricks our forefathers used to squeeze a picture out of the nether regions of channels 14 to 83 (reduced to 69 then 51 and soon 37

Like I said “radio nerd”. We can take things a little overboard. I’m writing a batch file to run through each channel on my Roku TV and save the details to a file so I can make sure my next antenna purchase supports all the bands I need.

Thanks - I don’t understand the terminology but my current sweet spot is the result of a lot of trial and error. The signal goes over my building and I aim at a very narrow area on the building opposite me. I am in a large courtyard and one area on one of the buildings is the only spot that has allowed me to have a reliable signal over a long period time without periodically adjusting the antenna. I was happy checking my signal each morning and making minor adjustments as needed. After the repack in Dallas it was almost impossible for me to get a reliable signal for ABC and NBC until I found this one spot.

I have thought about trying a simple yagi antenna because I assume the 4 buildings in the courtyard create a lot of reflected signals. What type of antenna are you referring to when you recommend a high gain antenna? Before my current antenna, I would periodically get a lot of pixilation. This required me to periodically adjust the antenna. Before I found this spot on the opposite build, everything I tried would give me most but not all the stations. The stations that I receive would change as I moved the antenna.

The distance from my antenna to the spot on the bulding where I get my signal is the sortest path to a reflected signal point that I have found.

I have just passed my first cord cutting anniversary. After subtracting the equipment costs and adding the additional streaming expenses, I have saved about 7 to 8 hundred dollars.

I was happy checking my signal each morning and making minor adjustments as needed.

I read your comment before 2nd cup of coffee, and thought you wrote ‘mirror’ adjustments.
I thought, brilliant!
And then my eyes focused.

Since you’re making adjustments periodically, you might want to consider for the future the Channel Master Smartenna+ (not Smartenna but Smartenna Plus). It has seven patterns of reception depending on where it detects signal locations. There is also a manual capability for making adjustments. There are interesting reviews regarding signal directions at the CM Plus site.

What type of antenna are you referring to when you recommend a high gain antenna?

A yagi is one type of high gain antenna. For the purpose of local television reception it’s the most common.

A dish is another type but it’s not the most practical for picking up your local stations because it would need to be very large to work effectively at those frequencies. They are good for satellite because those frequencies allow a smaller dish.

You being in a courtyard may have accidentally created another type of high gain antenna called a corner reflector. The buildings likely are not ideal reflectors but they clearly help based on what you told us. 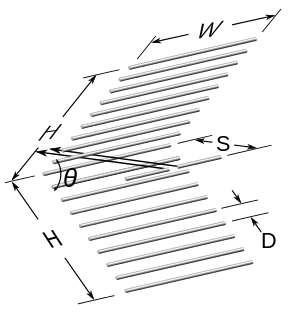 A corner reflector antenna is a type of directional antenna used at VHF and UHF frequencies. It was invented by John D. Kraus in 1938. It consists of a dipole driven element mounted in front of two flat rectangular reflecting screens joined at an angle, usually 90°. Corner reflectors have moderate gain of 10-15 dB, high front-to-back ratio of 20-30 dB, and wide bandwidth. Corner reflector antennas are widely used for UHF television receiving antennas, point-to-point communication links and ...

Thanks. If I have problems again, I will probably try a different simple small yagi. I don’t think the corner reflector would be a good choice because my building blocks any signal from the south.

I have we not made any adjustments for 5 months, since the repack…

My understanding about the Smartenna + is that if the signal degrades, you have to push the button to force a rescan. This is like my adjusting the antenna, only faster. This would be great if it was automated and did not require intervention. It sounds similar to a rescan with the Tablo…

Just realized why you can’t receive signals from one direction. If your building is stucco - stucco has within it a steel mesh which blocks signals. It can reflect signals in one direction while blocking them from the opposite direction. People with stucco homes have a terrible time getting signals inside the house with an internal antenna.

The Tablo rescan doesn’t deal with with signal direction. It focuses strictly on the frequency as delivered by the antenna and not any signal placement in the transmission path. The Smartenna+ scan detects any physical shift in a channel’s signal direction and path (not its frequency). Seems as if people have had some success addressing the periodic shifting of signals with this antenna from the remarks. They can see which pattern gives them the optimum reception of a set of signals across the spectrum.

It would be nice if this was an automated process to switch to a different reception pattern (one of the seven possible ones) when a frequency was selected by a device since they have a tuner\processer embedded in the antenna. But since all the frequencies are delivered at the same time, their processor wouldn’t know which one a device tuned into further down the line.

In any case ATSC 3.0 is coming to solve all this…

This is something that would not have occurred to me (the Stucco aspect).

I don’t think the corner reflector

After the repack, NBC went black and It took about 3 days of antenna positioning, amplifiers and attenuators to receive NBC again but I am still focused on that one reflection point that I found and I have eliminated everything but a distribution amp from my circuit. After the repack, it was a challenge to receive both ABC & NBC together with my other stations but I was finally successful. For awhile I thought it was going to have to settle for ABC or NBC and not have both. But for 5 months things have been good. I think if I could find a small Yagi that I liked, I would try that.

When I started out before the repack, I could receive most signals inside the stucco building with an inside leaf antenna, except ABC. That is when I moved outside to a Smartenna. After that I tried and returned several antennas before the RCA705. The RCA705 eliminated most of my pixilation issues until the repack. Then everything went to pot and I started over again.

I just wanted to share that even with the most extreme reception problems cutting the cord can still be worth the effort. I believe very few people have the reception issues that have plagued me and I have not pointed the high power lines by the parking lot between me and the towers 40 miles away or the cell tower on the property next to me. So I am quit happy with 5 months of no missed programs.

I may not understand all the advice that I have been given or everything that I have read but I want to thank every one who has offered me advice and suggestions on this and other forums.

Okay. That could be why I have found that horizontal positioning is perhaps as important within the limits of my balcony, as diectional positioning of the antenna for a reliable signal. Also the closer that the antenna is to a
any stucco surface, the less reliable the signal.

Interesting the RCA705 is simular in appearance to the corner antenna.