I’ve been trying to watch the TNF game this evening and am having issues where the action shots or fast moving parts are blurry/out of focus. This hasn’t occured on any other shows, just the one tonight. I tried a few different things to see if it would help.

The results from the last item looked much better with very little artifacts or bluriness. Any ideas of what to try next?

@shhern - Do you have a feature called ‘motion smoothing’ or ‘motion blur’ on your TV turned on?

If so, make sure to turn it off. 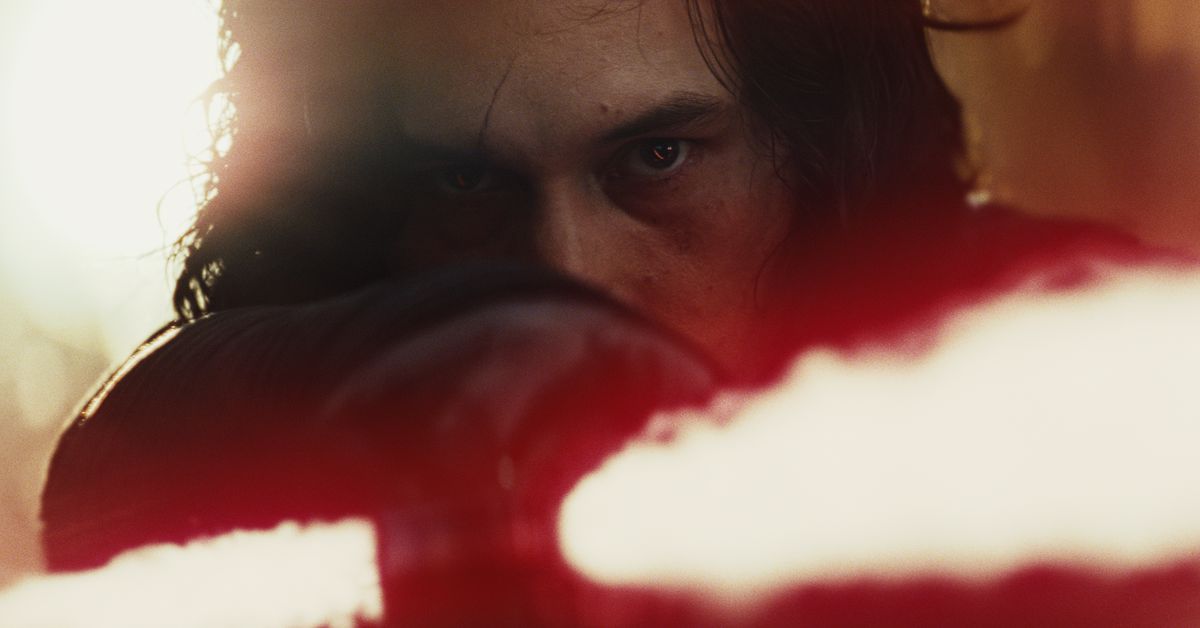 Hollywood’s biggest names are ready to fight the ‘liquid diarrhea’ of TV motion...

It doesn’t have to be this way!

@TabloTV I do not as I can’t stand the effect it creates when watching shows, in particular sports. That was the first item changed when setting up the TV. I figured if it was a TV problem the 4-tuner Tablo would exhibit the same issue.

I can’t see how triggering a recording would make any difference here. It’s possible this was a coincidence. It’s also peculiar that your OG Tablo saw a difference, seeing as how that product transcodes the video and the ENGINE does not.

Are you able to reproduce this on demand with this channel?

I was able to last night with that one channel. Others channels looked fine during the same period. Let me try working with it further this weekend. I’ll be watching some of the other games Sunday to see if the issue can be reproduced. I’ll let you know if it occurs or if all looks well next Monday…

Results from this weekend:

Watched the game on Fox for the last quarter and the picture was perfect with only the very occasional artifact popping up.

Then watched the second game (KC-Pitt) on CBS and it immediately exhibited the same issues as before where the motion blur made it unwatchable. This is the same channel as the Thursday night game so it makes some sense. Beyond the blur there is a significant amount of artifacts. Again, did a channel scan to check the strength and had 5 green lights indicating a strong signal on the channel. The OG Tablo was then tried with the Beta app for Android TV and it worked with no problem While I was watching on the 4-tuner, I tried recording on the Engine. Once was the game was over I pulled up the recording and watched around 30 minutes of the recording. It looked much better and was watchable but did have some motion blur at times but nowhere near what it exhibited watching Live.

Currently am watching the Sunday night game on NBC and there has been no artifacts and an excellent picture.

My only thoughts now are wondering if the tuner is getting overloaded? I’m skeptical that this is the case as I’m further away from this antenna than most of the other channels by ~ 10 to 15 miles. Thoughts again for next steps?

I have an off-the wall idea here. In my areas (75028), Fox broadcasts on 720P and I believe they may broadcast sports events at 60 fps. CBS broadcasts at 1080i at 30 fps. If you have a newer TV with 120 or 240 Hz refresh rates, your TV may be interpolating frames. Look in the settings for your TV for “motion smoothness” or Motion blur. On my LG TC it’s actually called Tru-Motion. Turn that off so the TV doesn’t try to interpolate frames between the actual broadcaster frames.

@Bardel Thank you for the input. Support mentioned the same thing above but I had this turned off for all viewing as I can’t stand the frame interpolation. It really appears to be more of a reception issue than anything else as all other shows look good. I still can’t wrap my head around why the recording of the same channel has reduced problems unless it has to something to due with encoding of the recording. I don’t remember for sure how the Engine behave vs. the standard Tablo.

I am struggling with this same issue since moving to Engine and see it on most of my recordings. I have the motion setting suggested off (I have since we bought the tv) so no luck there. We have the exact placement and antenna that we had for our tivo for 6 years as well as our old tablo 2 and neither experienced this issue so I really don’t think it’s a reception issue. I will say though that we had to move our outdoor antenna up 4-5 ft right after switching to tablo comm tivo to maintain a reliable signal…not sure why but it as soon as we made that switch we started having intermittent signal drops that we never did before. Elevating the antenna seemed to have helped with the OG tablo but engine we are getting some odd things like this so but sure what to make of it. The rest of the family is not a fan of it so far though

@andygresbach I have only noticed the same issue mentioned above one or two times since the original post. I do still get some pixelation problems on some shows which are worse with certain channels. I strongly believe that it is when two shows are recording or being watched but don’t have any firm data to back that up…just seems to happen more when multiple shows are running. There have also been some times when thumbnails are not created if I start to watch live TV too soon after two shows have recorded.

So are you seeing the same motion blur at all times or just certain broadcasts as I did?

thanks for the follow up! i haven’t gotten a good pattern to ours just yet but i’m trying to pay closer attention. I’ve seen it on just about every channel i’ve watched but i’ll watch closer if its with only Live watching or recorded content. I’ll have to check if i can tell if i have multiple things recording when i see it as well as we usually watch things after they are done recording. I did notice we had an hour long show break up into 3 segments (52 min, 1 min, 11 min)…which i’d guess was a signal issue at that time but not sure but i only got thumbnails on the last 11 min segment (this was something we watched last night that was recording from Friday night).

I really don’t think its a reception issue w/ the artifacting/skipping since it’s only been since we switched to Engine. (i also was previously using this Haupage tuner in plex for a month before this and did not see the issue on their live tv setup so dont think its a heat issue or anything w/ the tuner).

I’m not sure if support monitors the forums here at all but i’m always happy to test or gather any data needed that might help figure this out . I know Engine is a new product so going to be a few growing pains early on to expected. Hopeful we can get this one figured out as its driving my wife crazy!

I have tended to find the motion blue issues only occur in live sporting events, particularly when watching live. Again, it isn’t all of the time so that makes it even harder to pinpoint.

I don’t think i have ever seen three separate recording a like you mentioned above short of a power blip causing me to start a recording over. I know that anytime I have had a question with pixelation or the blur I check signal and it is always at 4 to 5 dots/bars so it should be just fine.

I know that the support guys look through the forums. In fact you might want to send in a ticket as the Engine can send in logs they might want to look at to help diagnose the issue. Worth a try.

Ya i’ll probably try that. i’m sure its something that can be improved on and have to start somewhere. I am seeing it right now w/ a football game but usually see it with prime time recorded shows (low action but HD). I did a rescan of channels and for the current CBS game i have full bars / signal so that seems fine too like you also found.

The recording break up that i mentioned has only happened once so maybe a fluke but worth mentioning. I was really hopeful that Engine would get the thumbnails for FF/RW for live tv but i understand thats a total architecture shift. someday maybe!

One more update on this…i mentioned how i have the auto-motion setting off on my Samsung LED (like it was suggested) but when i found a time in the show i was watching that it did the artifacting, i rewinded and everytime i replay that part it does that same thing. I also tried turning that TV setting on and tried all the various levels of it and did not make any effect . Not sure if that helps at all w/ this but it would appear that is not playing a factor as best that I can tell

Had it happening this afternoon again watching football but the game this evening is buttery smooth. I wasn’t recording another program so I’m not sure why it was giving problems. Again on the OG 4-tuner all looked well. 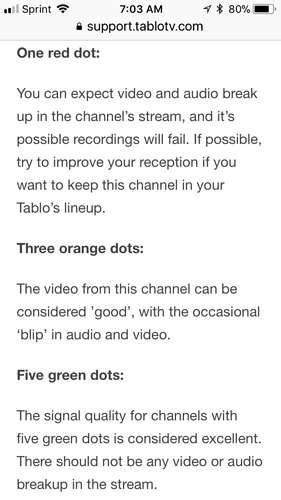 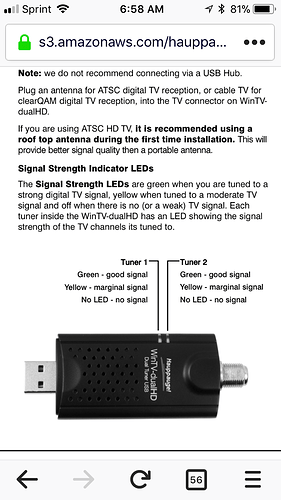 It would be nice if Tablo could include an app like the one provided with WinTV that can report S/N conditions reported by the same usb tuner. 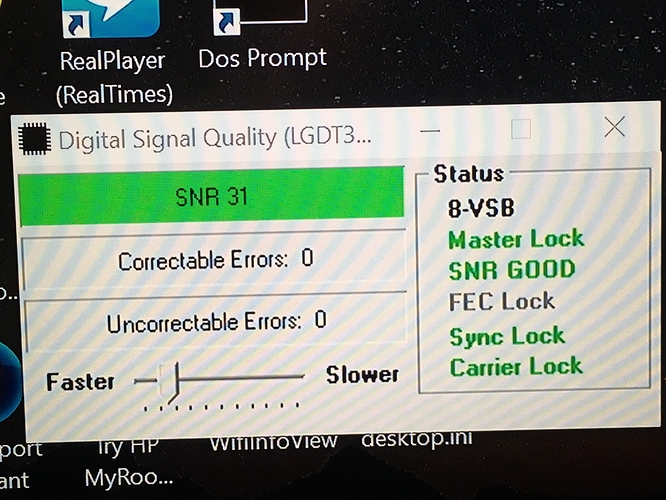 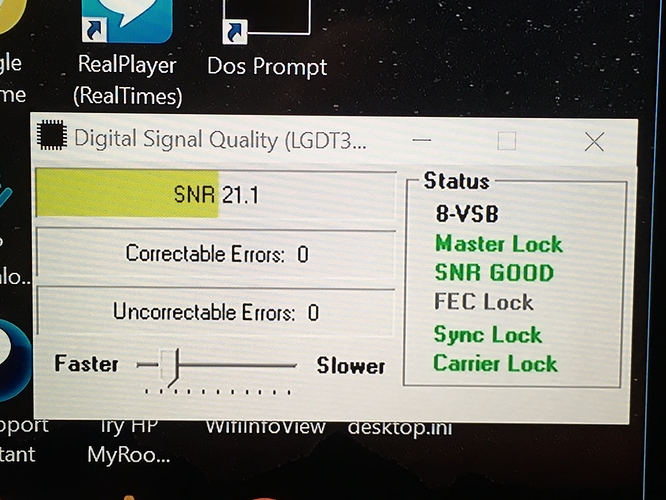