I would love the ability to add a larger hard drive using the second USB port on the back of my Tablo. It could be written so that the Tablo would treat the origional drive in the same fashion as the Tablo DUAL. My original HDD could kick into a read only mode just like the onboard 64GB of space on the DUAL when you plug in an external HDD.

I am hoping this is already in your pipeline but also hope it can be kicked up in the list of priorities.

I’m not disagreeing, however, many-a-cordcutter have a Plex server. Recommended. There are several community developed packages that take recordings off your Tablo and some are intentionally Plex friendly (e.g. SurLaTablo). It’s not unusual for Plex servers to have 10+TB of disk (I’ve seen some with 100TB).

Having been a Plex user for years before my Tablo, it’s just more “natural” to put shows I want to keep persistent into Plex instead of Tablo.

Just my two cents. Both of my Tablo just have 1TB drives, and I never push even that limit. So far my Plex houses 288 movies and 1570 TV episodes I got from my Tablo. 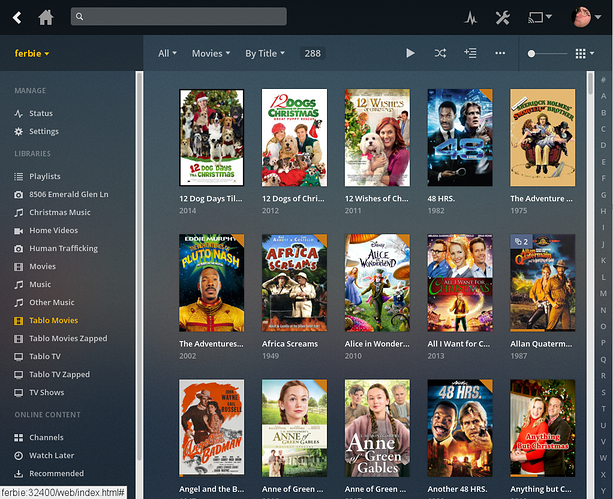 I also have a Plex server. Personally if I were going to put the work into ripping shows off to Plex I would just let it do my recoding with my HDhomerun.

I also used to have a MythTV (hence why I already have the HDhomerun on hand). I moved from Myth to Tablo for the ease of using an appliance over a roll your own solution. Don’t get me wrong, Plex is 1000x easier than Myth but its just not what i want to do.

Since the code (or at least I hope most of it) already exists for the DUAL, I figured this request wouldn’t be out of the realm of possibility.

How about Tablo plex integration and we remove hd issues from the Tablo equation. Maybe integrate the way hd homerun does, And record to plex directly and take advantage of comskip plex integration.

There is no financial incentive for Tablo to do that (and I’m fine with that) I’ll stick with the Original Post.

What is the incentive for silicon dust and haupauge to integrate. If you have a nas and plex, and don’t have a lot of coding experience. Having that integration might appeal to some of us Tablo owners.

There are plenty of hd drive issues reported. And plenty of plex dvr issues as well. Both systems have warts. But the functionality works for some.

For me it would be a nice option.

Well they don’t sell a monthly subscription for one.

I have been waiting for them to activate the second USB for a second HD since I purchased my Tablo at the very beginning.

here is an alternative idea.
the Tablo could migrate everything off the old HD to the new one? then remove old drive

I’d like to add to this request. would it be possible to add a second larger drive to the Tablo 4 second USB slot. Then migrate the recordings to the second drive. And then remove the first smaller drive? This would help those people who choose a drive too small initially, or who want to keep some recordings and not delete all.

How do you import Tablo shows into Plex? That would be cool! One place for all you entertainment.

You have several options…here’s a good place to start…

There are several tools. Tablo Ripper is a favorite for Windows users. I wrote SurLaTablo… which works across pretty much all operating systems (and also has a lot of features).