Whats the difference between MoCA and DECA?

arrowrand posted the answer in the thread above… same features, different frequency. MOCA interferes with DirectTV boxes, DECA interferes with cable boxes. If you’ve got cable in your house that you want to keep, then you need MOCA. If you have DirectTV, you need DECA. If you don’t have anything, then you can use either, and DECA is cheaper. I haven’t looked at the specs, but it may be worth comparing the rated throughputs on adapters you’re considering.

I’m missing something here. If you’re using a length of coax to connect from your Tablo to your network router or switch, how could it interfere with cable or dish?

Me, I just finished running cat5e around the house. My Tablo is mounted in a panel box in the basement, along with patch panel and switch, where the antenna cable (and the cable company’s coax and the phone line) come into the house. The TVs and various computer equipment are nowhere near it.

What these boxes do is transmit network data over coax lines using existing house wiring. They do so in such a way that they won’t interfere with the standard video signals cable operators use. So I put one where my router is, run an ethernet cable from my router to an adapter. Then the coax from my wall goes into the other side of the adapter. Now any other adapter I plug into any other coax line in the house (assuming the wiring is hooked up) can get solid/fast ethernet via a wired backbone.

DECA, MOCA, and PowerLine are all technologies that were invented so you don’t have to wire new ethernet cables all through your house. You just use what’s already in your walls.

I had looked at these and forgot all about them so thanks for the reminder! But I’m seeing the DECA with a power supply and without. Are the power supplies needed? Both are DCA2R0 Gen II.

@theuser86 did you need the power supplies?

Yes they need the power supplies.

And yes they can be used from Roku to router as well. In fact, I actually use them to hard wire my router to my DSL modem which is in a different room. This way my Tablo and main Roku are on the same router connected with short Ethernet cables. Plus the router is in a better area to better distribute the WiFi signal.

Would either of these work? Can’t find a DECA termination or POE filter specifically.

A MOCA band-stop will not work for DECA. They’re different frequencies. The DECA bandstop filter should give you the privacy. You want that at the point of entry into your home (either the outside of the house or at the direct line from outside into your house). Basically the idea is to keep DECA/MOCA frequencies from getting into the coax lines in your neighborhood.

Sounds good. The main line from outside is actually connected via an inline connector in my basement so I imagine that’s as good a spot as any. Now that I think about it, that lines runs straight to my router with only one more inline connector so anywhere along there should work. Thanks!

I’m wrong about the information below, there ARE receivers that will power the DECA. I don’t know if I’m misremembering or if I was taught wrong, but outside of a DirecTV setup you will STILL require a powered DECA.

No, there aren’t any DTV receivers that can power the DECA externally. If the DECA isn’t internal, you have to use the external power supply.

DTV does make the DECA adapter available without power supply as a service part, because if a DECA fails it usually isn’t the power supply that went bad.

If you buy some without power supply, either send them back or hold on to them as service parts in the event that one of your DECA adapters fails.

Not sure why we’re debating DTV hardware setup, not relevant to Tablo setup, but with a CCK feeding all your receivers, the DECA adapters at the receivers do not need the power supply.

I’ll obviously defer to Solid Signal. I was taught wrong, or more likely I am misremembering the setup. I haven’t had a DECA in my DirecTV setup nor installed one in a couple of years.

Me being wrong doesn’t change the fact that anyone that wants to use DECA’s to connect a Tablo will require powered DECA’s.

But since we’re not using them with the DTV receiver, the separate power source is needed.

Correct - that is what I said re: use with Tablo. As well, the link I shared from Amazon is to purchase them with the power supply.

Ok so here is what I’ve done now. I have moved the modem and router up to the second floor keeping the modem directly connected to the incoming coax ISP line and used a DECA adapter to push it back out thru my coax network via the router. I have a DECA adapter on the first floor feeding an old Belkin Wireless N (circa 2009) router which is feeding the Tablo (I had to keep the Tablo on the first floor due to roof antenna wiring) and then an 8-port switch for everything else on the first floor. I have 100/down 5/up service and getting speeds in the 90’s/4’s at different wired points so happy there. Both boy’s xbox’s are now wired and they are happy too as are my wife and daughter who have the Roku 1s. So all good right?

All except for the fact that when I connect the DECA Band Stop filter that @thanatos0801 mentioned (attached in either direction) I lose internet connection. I am trying to install it mid-line of the main line to my modem which is inside my house and the only inline connector after the box outside my house. Inside my box Charter has an Antronix surge protected ground block CL-15.

Thanks for any help!

I’m not sure what frequencies Charter uses. The DECA bandstop may be blocking a range that Charter is using for their cable service. You may need to try and run the wire straight from outside the house right to your cable modem. Use a coax cable splitter to split the line in, one side goes to your router, the other side goes through your DECA bandstop to the DECA unit. Just make sure that the line coming in doesn’t branch off to any of the other coax lines you want to hook other DECA’s to and that should be safe.

Unfortunately, coax has a lot of variables, and I’d need to know where all your wiring is running to get it perfectly sorted out.

Thanks for the help! I’m not sure of their frequencies either but you’ve lost me with splitting the line in as the line in only goes to the modem now and then out of the router via ethernet to a DECA unit which goes then to a coax splitter to feed the rest of the house. I am trying to attach my layout. I thought I used the DECAs after the router to convert to coax which then goes to a splitter. I thought the filter goes on the line in which would be the only way a signal would get out. 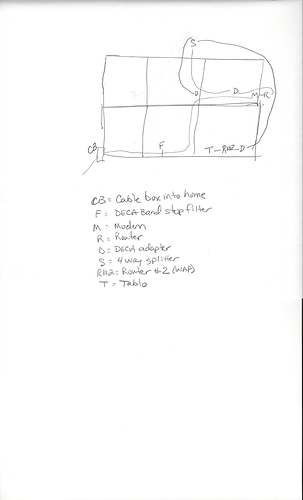 @mullermj - I did a little digging on this, and I should have caught this sooner. Arrowrand correctly stated above that DECA can interfere with cable because they have overlapping frequency ranges.

In your case, since you’re using a cable modem, you probably really want MOCA adapters. They’re more expensive, but they’re on different frequencies than cable, and a MOCA bandpass won’t interfere with cable.

This link is pretty technical, but it does suggest that, depending on your setup, it’s possible that you can use DECA with Charter and it will work. It looks like your configuration is OK and will function. BUT, since they’re on the same frequencies, when you put the bandpass filter in place at the entry to your home, you’re basically blocking the cable signal as well as the DECA signal. You can use the setup as-is, but the risk you run is that one of your neighbors on the same cable run also sets up a DECA in-home and then your two networks could become linked. You’re not exposed to the world, as far as I’m aware… just anybody on the same coax run in your neighborhood who is also using DECA. Whether that’s a risk you are willing to accept or not is up to you.

What I would do if I were you (and I didn’t want to shell out for MOCA) is forget the bandpass filter and go for actual isolation in your coax lines, but it’d require moving some things around a bit. If you move your cable modem to the cable entry point, you can disconnect the entry line from any other coax and wire that straight to your cable modem. Then wire ethernet from the cable modem to your DECA box, and the coax from the DECA into the splitter that feeds the rest of the house. Then you run DECA at any other point you want hard-wired ethernet (to get to your routers, for instance). That way, your home coax is completely isolated from the external lines, and your DECA network is feeding everything interior. Did that make sense? Hopefully your home was built in such a way that the coax split is interior to your house and not in the external junction box. It’s still possible to run what I just described in that situation, just a little more wiring work required to make it happen.