Confused about signal quality...can't get 46-1 ION

I am having a problem with Tablo getting channel 46-1 ION. When I try to watch it on Tablo Live TV, I either get an error about signal quality and it doesn’t play anything at all, or, it plays but it is very pixelated and jumpy. However, if I watch that channel with the TV connected directly to the antenna, the channel comes in perfectly fine.

According to AntennaWeb.org at my location, channel 46-1 ION is an RF Channel: 47, 32 miles at 249 degrees. It’s labeled as a “blue” station where “blue” is defined as: A Medium Directional Antenna with pre-amp is recommended to receive this station. Look for the CTA-certified Blue mark on the antenna’s box.

To troubleshoot this, I tested Tablo Live TV on a similar station. I define “similar” as a channel that is similar in miles and degress to 46-1 ION. For me, a similar channel would be 24-1 IND. So, when watching 24-1 IND on Tablo Live TV, It streams perfectly fine! According to AntennaWeb.org at my location, channel 24-1 IND is RF Channel: 14, 36 miles at 248 degrees (miles and degrees almost identical to 46-1 ION). It’s labeled as a “red” station where “red” is defined as: A Medium Directional Antenna is recommended to receive this station. Look for the CTA-certified Red mark on the antenna’s box.

So, when I’m guessing when the Tablo did its original scan, it found channel 46-1 ION and it had a strong signal strength. But now, the signal strength has really dropped off. But I can’t really point to a reason why this would be the case because channel 24-1 IND, which is at a nearly identical distance and location as 46-1 ION, has a strong signal with 5 green dots. And, when I watch 46-1 ION through a TV connected to the antenna, the picture is perfectly fine.

Any thoughts on what’s going on here? 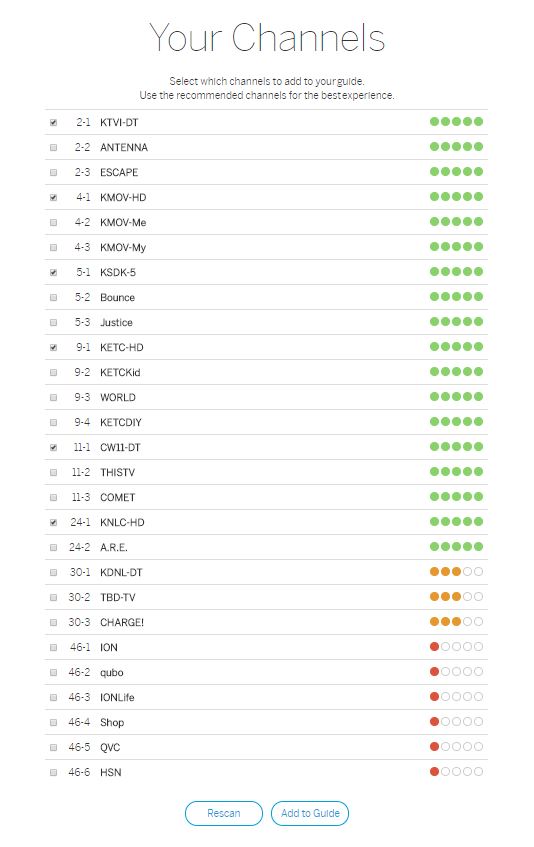 Case in point: channel 48.1 in my area was running about a 15 SNR yesterday as shown by my PC tv tuner card. 15 SNR is right at the digital cliff point. However, all my televisions received the station fine, so they must be better configured than the tuner card in my PC.

Today the tuner card shows an SNR of around 18, but the signals shown on my TVs are essentially unchanged. So it appears some tuners are more sensitive to the SNR of the OTA signal, as I suspect the Tablo tuners are.

You should benchmark your OTA signals with another signal strength display if possible, for A:B comparisons, if possible. 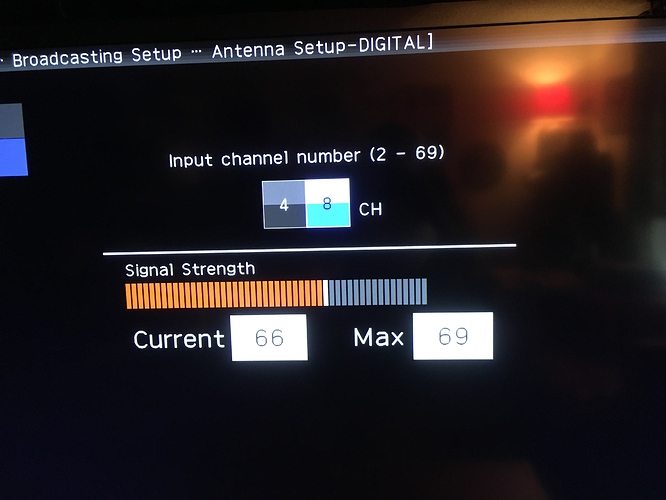 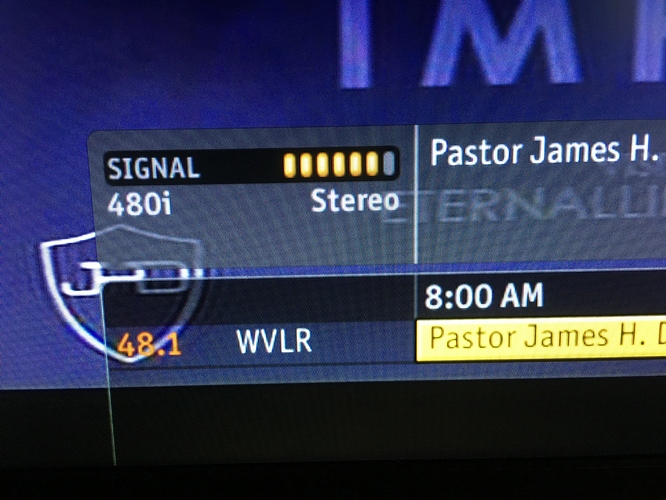 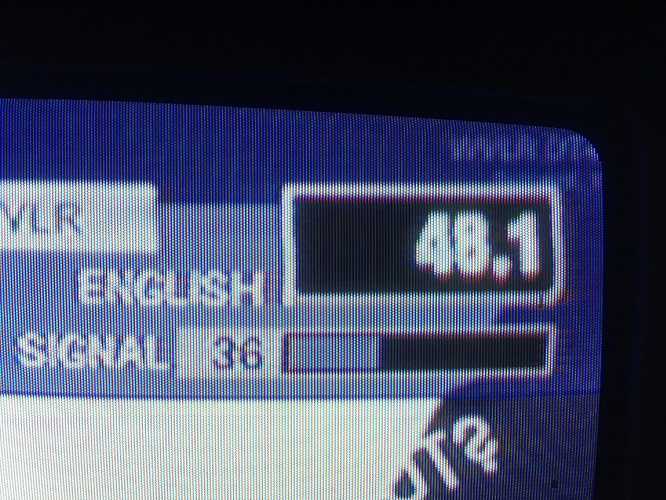 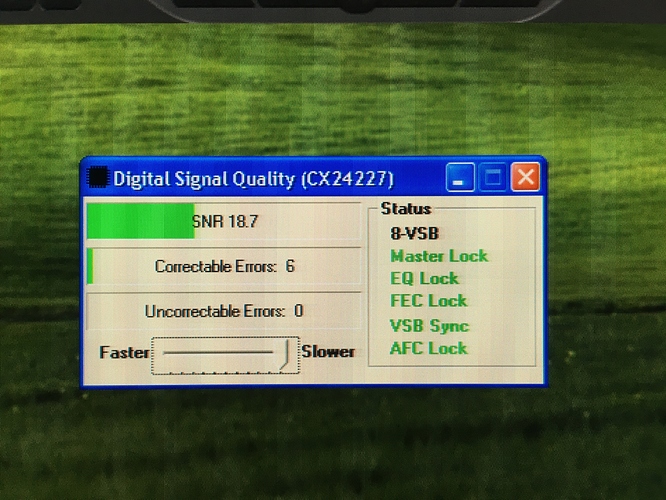 Also FYI here is the SNR of my strongest station displayed by the PC Card tuner.

This makes the SNR of ~18 for the weaker station a believable report. 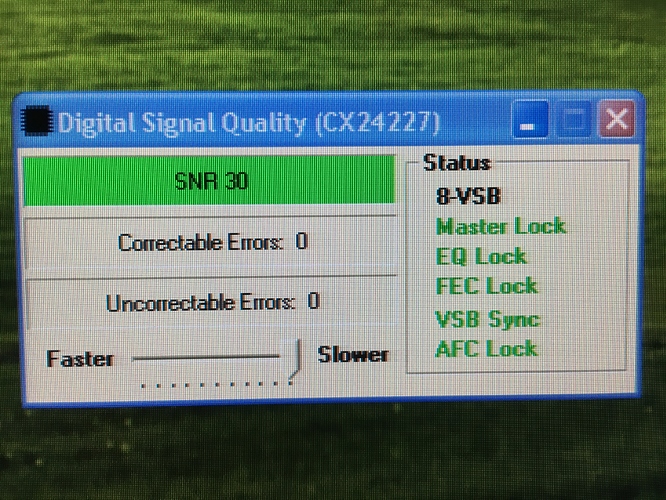 Thank you for the detailed response. I am not sure if my TV will give me a signal quality number, but I will look and see. I do not have a tuner in my computer so I cannot check that way. If I can’t get the quality number from my TV, I may buy a one of those devices to measure it.

Notice as the day goes on the SNR of the weak channel 48.1 has dropped from 18.7 to 17.5 and errors are increasing. When the SNR gets close to 15 the PC display for that channel will drop out, even though the TV set tuners will still work at that time. 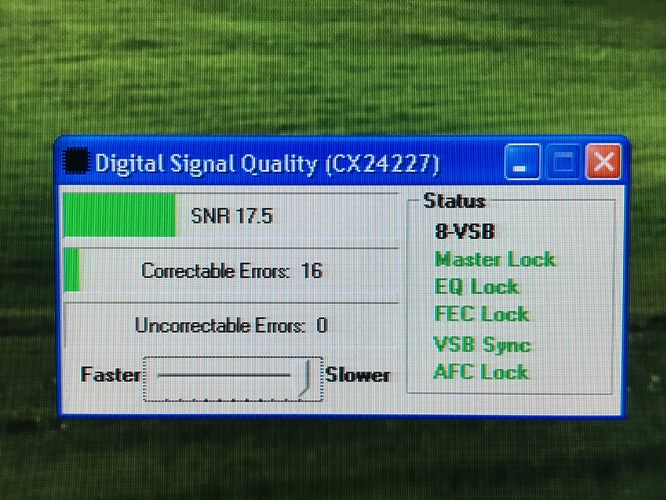 One more photo just to show the complete screen on my PC using the TV tuner card.

I can easily compare when the image wiggs out as the SNR drops. 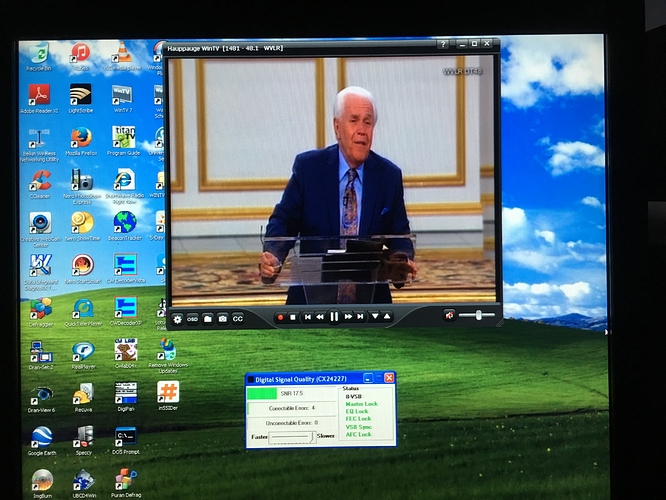 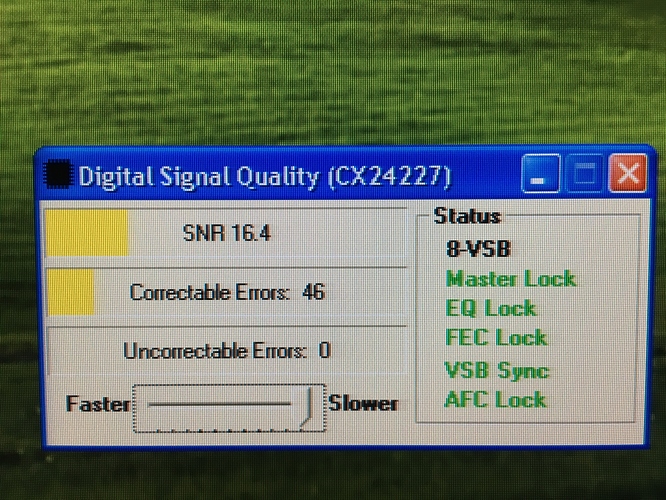 Heading towards the digital cliff ~15 SNR.

I’m now wondering if the problem could be heat related in the PC. Since TV tuners have inherent noise, and noise increases with temperature, the lower SNR might be due to the tuner itself. I will turn off the PC and let it cool for an hour or so and see if the SNR readings improve right after startup. 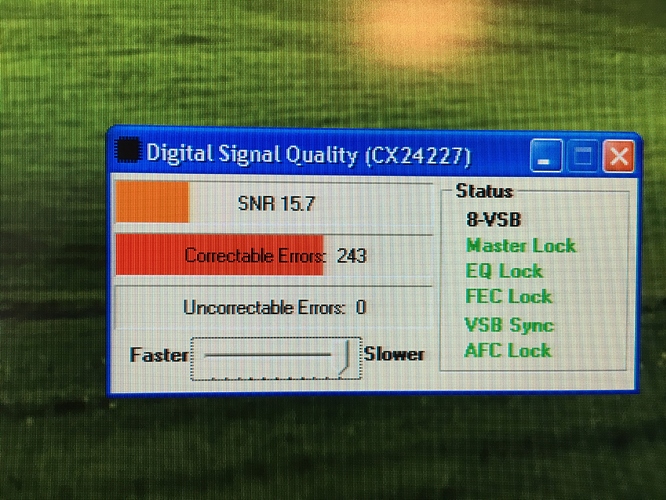 Might be an interesting exercise to do a channel scan on a hot Tablo unit, then another scan after cooling the Tablo with a fan, and see if the channel color dots change. 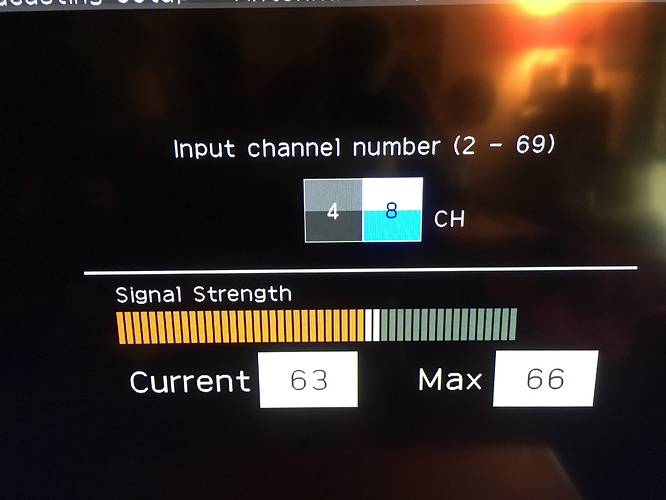 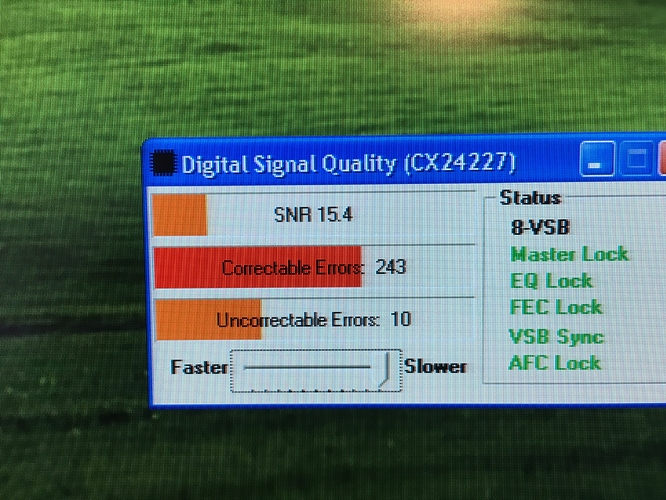 Some articles on the Internet suggest adding an amplifier to try to pick up a weak signal can be counter-productive. If a strong channel signal exists that is near the upper tolerance limit for the TV or Tablo tuner, then adding an amplifier could result in tuner overload that could reduce the benefits of amplifying the weaker signal.

I tried using a preamp ahead of my 8-channel distribution box and found I had to insert 10db of attenuation resistor units to get a good signal, and channel strengths overall were not improved significantly. So now I run a naked circuit, antenna straight to the distribution box.

Of course everyone’s installation is different
and your mileage may vary.

Thank you very much for all the info. Last night I was able to use my T.V. to check the signal quality of channel 46.1. I was really surprised at the result: 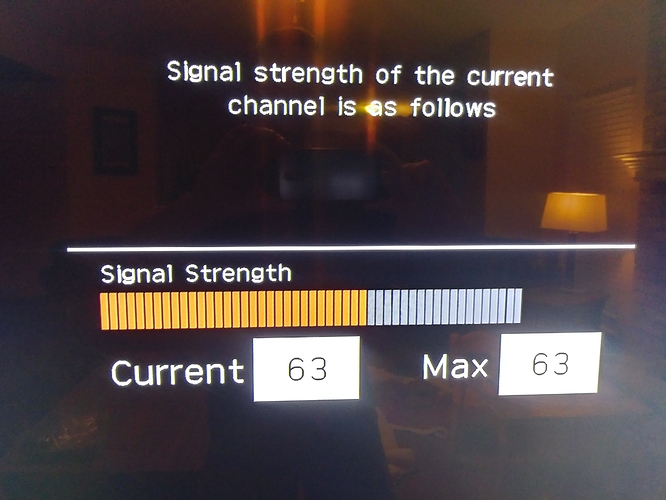 I don’t think my TV gives me a SNR number. I think current and max are just percentages from 0-100%. I thought 63 was a pretty high number, so last night and this morning I tried Tablo Live TV on channel 46.1, and magically, it’s perfectly fine! Below is a screenshot from this morning. 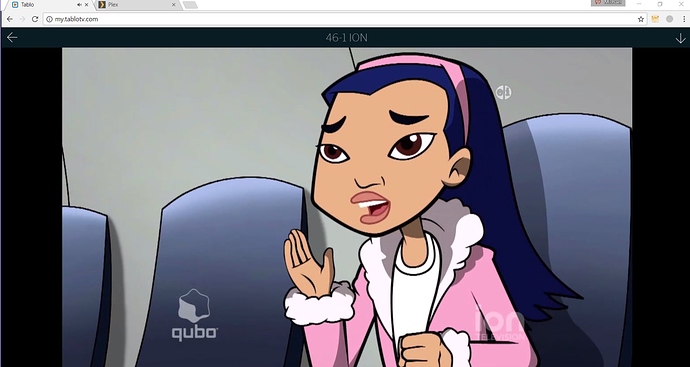 I haven’t done anything with my antenna direction or amplifiers. It just started to work better. Perhaps that broadcast tower got an upgrade

At the same time my Sharp TV displayed 63 on my weakest station, my PC tuner card was at the digital cliff. It would not surprise me if the tuners in the Tablo ( a 4-tuner unit) were at or near the digital cliff as well.

I really wish there were a way to view the SNR of TV signals at the Tablo in real time. I suspect there might be a secret CGI script that could do that, but the Tablo techs ( God love 'em ) have not seen fit to enable such a feature for us users. 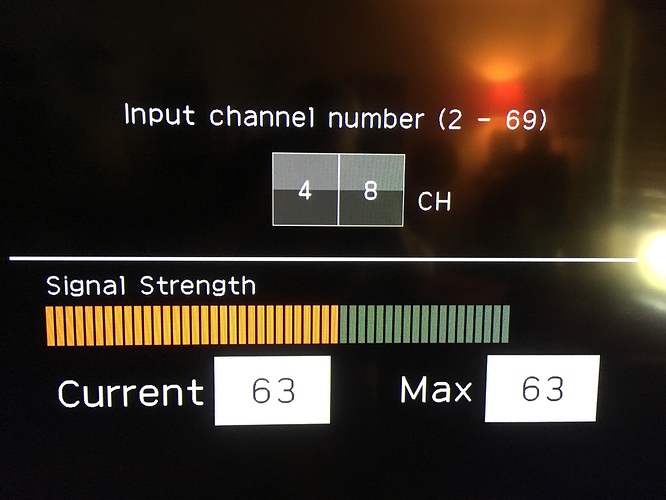 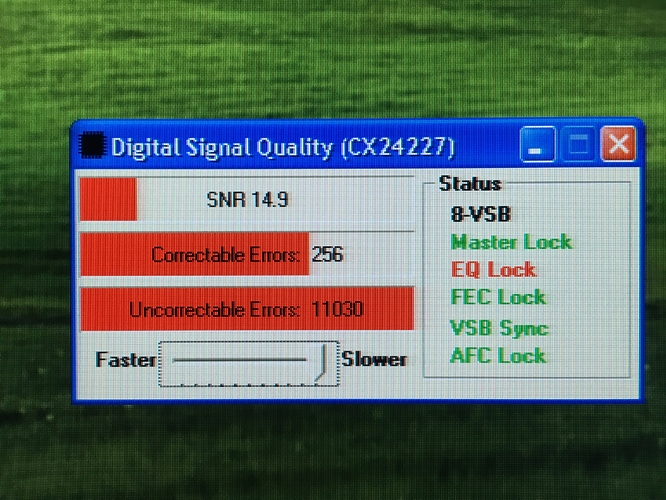 It would seem to me that the addition of a signal strength and quality capability would be a very nice thing to enhance their continued product success. Most of us can only measure the signal on other equipment and do not know what the signal quality is thru Tablo. (Are you listening Tablo?)

As an experiment, I added in-line attenuators on the feed to my Sharp TV to see where the signal dropped out on my weakest station. Value parameters:

So it looks like a value of 35 for the channel signal is at the digital cliff for this TV. It also suggests the TV signal meter will not display a value lower than ~35. Good to know I have about 13db of reserve in case of diminished input signal and still have a viewable picture.

While I had the 18db attenuator in circuit I switched to a channel that normally runs 100 and the bar meter showed 93, so that channel must be exceptionally strong, and it seems the TV tuner response to signal reduction may not be a linear relationship.

It seems that trying to nail down detailed specifics of signal quality and signal strength for any given TV channel is like chasing butterflies barefoot down a gravel road in 95 degree weather while wearing a wool coat and whistling Dixie.

It seems that trying to nail down detailed specifics of signal quality and signal strength for any given TV channel is like chasing butterflies barefoot down a gravel road in 95 degree weather while wearing a wool coat and whistling Dixie.

Whistling Dixie is the hardest part.

Are you sure it’s a cheap tuner that’s the cause or is it just as likely it’s the fact that the antenna signal into a 4 tuner Tablo is basically being split 4 times, necessarily reducing the signal into each tuner.

I’m not arguing the quality of the Tablo tuner isn’t having any impact, but comparing signal on a 2 or 4 tuner device that necessarily has splits of the input signal to feed those multiple tuners vs a single straight signal into a TV is by science going to be different. Important to keep that in mind when considering if a pre-amp of some type will help, particularly if your initial signal strength is near the “digital cliff”.

If you are so happy with TiVo, post there. Please stop spamming this site with your posts about your negative experience.