Comcast Doesn't Want you to use your own router.... (shocker...)

Yeah this article ignores some of the details of the story (and is incorrect about the router part).

This is a better version of the story: http://consumerist.com/2016/01/12/why-is-comcast-interrupting-my-web-browsing-to-upsell-me-on-a-new-modem/

I am no Comcast apologist, but this isn’t absolutely 100% terrible of them. They want their customers on the latest hardware. Comcast doesn’t want customers using outdated docsis 2.0 modems because they may result in an unpleasant customer experience. Granted they are using terrible methods and tactics to disseminate this information, and effectively using this as a marketing ploy. Thats pretty shitty.

This has nothing to do with routers at all though (that just gets roped into it because Comcasts hardware is modem/router in one).

I owned my own docsis 2.0 modem and had to buy a docsis 3.0 modem at comcasts request… I didn’t write an article about it

As part of my cord cutting, I picked up a docsis 3.0 modem to use instead of renting one - are they going to psuh a docsis 3.1 modem on me now?

As part of my cord cutting, I picked up a docsis 3.0 modem to use instead of renting one - are they going to psuh a docsis 3.1 modem on me now?

If they had that model in a Docis 3.1, I probably would have bought it, but the 3.0 modems are still better for now.

ok, cool. I got the ARRIS SURFboard SB6141, so a few steps down from yours I think. My service has still been great. 60 down and 15 up on my iphone.

well that sucks. Thanks for the heads up. Did you replace it? I mean its just their preference - not actionable, right?

Did you replace it?

I am now… WOOT.com has a one day special on factor refurbed SB6183

I am now… WOOT.com has a one day special on factor refurbed SB6183

Huh, I wonder why they are telling you to replace it. Both models you mention are DOCSIS 3.0 only difference I see is the 6180 is dual thread making it capable of higher download speeds.

Are you paying for an Internet package faster than 343Mbps? (the new one can do up to 686Mbps)

Wow, that’s cheaper than I bought the 6141 for and I’m still within the return period. Hopefully I kept the packaging.

Regarding the 6141 and Comcast End of Life status: (per http://thewirecutter.com/reviews/best-cable-modem/) Article dated December 2015 - so recent

We’ve been hearing a number of reports that Comcast has moved our pick, the Motorola Surfboard SB6141, to end-of-life status. The leased version has; the retail version (our pick) hasn’t. We spoke to our contacts at Comcast HQ, and here’s what they told us:
“…[W]e recently moved the SB6141 to end of life status for customers who have been leasing that particular modem from us. We will be swapping that device with newer models for no additional charge (for leased customers) as needed. For customers who have either already purchased the SB6141 or are considering buying one, we continue to support the device and we’re working with the manufacturer to ensure it continues to receive regular firmware updates that keep it running well. However, if they are unable to continue to provide regular firmware updates (such as bug fixes), then we may also consider moving the retail version to end of life status as well.”

Huh, I wonder why they are telling you to replace it. Both models you mention are DOCSIS 3.0 only difference I see is the 6180 is dual thread making it capable of higher download speeds.

I own my 6141 but I did get the email… One person put it really nicely… even if you dont pay for that full bandwidth … having 8 more channels available for access means you will get less latency/delays if you live in an area with high internet use… it just gives you 8 additional channels your cable modem could select in a pool from when trying to downlink data.

I wasn’t planning on buying one right away but the sale on WOOT came up and I had a discount coupon code that had to be used up in a few weeks so it was a win-win situation. At least now I know I will be compliant for a while … I am not terribly upset because I got the 6141 last year or so pretty cheap (like $40 … and in what I saved in modem rental fees it already has “paid” for itself and then some … so I still see this as coming out way ahead vs all the wasted money I would have blown if I rented my cable modem)

Incase you are wondering this is what the letter looks like… 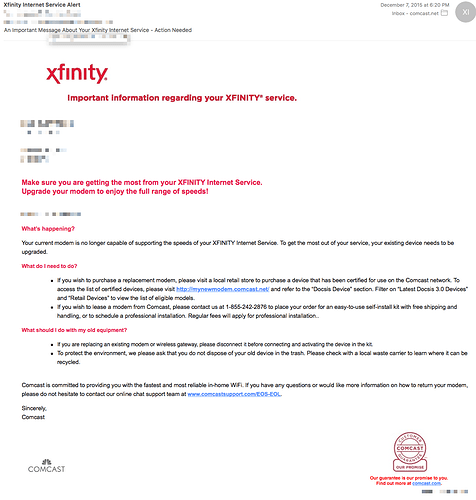 I have had Comcast for over 15 years and have my own modem and router. I have not had any issues, but I did go to their approved modem site prior to my purchases and I have an excellent set up with the most current technology. Thanks to my new Tablo 4-tuner DVR I will be getting rid of Comcast tv but keeping their internet this week.

The funny thing is I only had the 6141 for a year or so and it was on their approved list at the time … no problems… 1 year later and they send that email-letter… but its no biggie since I got that modem cheap as a factory refirb and I just got the 6183 also cheaply (about the same price last year for the 6141 ) … it will pay for itself like the other one did in just a few short months in savings vs renting their modem. I’m sure the 6141 would have been enabled by comcast for sometime but since the opportunity to get the 6183 (comcast’s “recommended” upgrade for my modem) I jumped on it.

I have the 6183, but unless you have a very high tier of Comcast cable, I don’t understand why your 6141 wouldn’t work. It is still on the approved list and it is a great modem. Is your router up to date? If you have an old router, it will slow down your network.

I think you missed my previous post… I didn’t initiate the change… Comcast did!!

even if you dont have the top tier comcast cable service… having 8 extra channels for the modem to utilize can significantly reduce congestion / latency if you are in an area with a lot of other customers … since it gives the modem 50% more channels to select from where the traffic might be lower or absent.