In Wake Forest NC, the main ABC station’s channel and sub channels have disappeared from my channel lineup completely. I’ve updated the guide and rescanned several times this morning. They are just gone. All other channels are available.
They installed a new antenna last month and I had to rescan then, but this is not that.

Check the station website. Maybe their transmitter is down.

Thought of that. Nothing beyond their prior messaging instructing viewers to rescan due to their new broadcast antenna. Going to keep trying to reload/rescan my channel lineup …hoping it’s just a glitch in the cloud with the Tablo channel database.

If your antenna is picking them up, they’ll show on a rescan even if you don’t get guide data.

So the latest rescan just now brought back the main ABC channel (11.1) and a subchannel but only the 720p listings and those are showing a super low one red dot signal strength.
They changed the antenna on the same mast so I shouldn’t have to muck with my antenna at all.
Hmmmm…

Sounds to me like they’re still working on the antenna. Did they just change the antenna or did they also change frequencies?

Probably right - still working/adjusting it.
It was a physical upgrade of the 2000’ antenna. Here is a video of the operation that triggers my fear of heights brutally:
https://abc11.com/video/embed/?pid=6328874

Also a frequency change, but this was all supposedly a couple weeks ago.

Yeah, if they needed to send a crew up the tower to adjust something, they would need to reduce the transmit power considerably, if not shut it down totally.

So the station got back to me. No changes to their antenna this week…

“There have been no changes in our transmissions since July 22. At that time we returned to broadcasting at full power on a new main antenna. I don’t know what type attic antenna you have but please remember that ABC11 is on a VHF frequency (channel 9) and lots of the so-called “digital” or “HD” antennas are primarily designed for UHF channels.”

My antenna is one of those indoor flat panel numbers mounted 30’ up in my attic on an exterior wall that has had no issues for two years and suddenly one of my major broadcast signals goes away? WTF??

In the re-pack I see they moved down from channel 11 to broadcast on channel 9.

Not sure on the exact specs of your antenna but this could have easily moved it into a less ideal range for its VHF reception or it now may be on a frequency that has other interference nearby that wasn’t in conflict before.

I’ll admit, 11 to 9 isn’t a large shift (only about ~10MHZ) but stranger things have happened.

You might can get away with adding a small amp if your existing antenna doesn’t already have one, but a larger VHF capable antenna would correct it either way.

Thought about changing the antenna. Might be my only choice.
Just weird that the channel dropped this week, two weeks after their re-pack and antenna replacement work was completed.

@daniel454
If they moved from 11 to 9, then why is my Tablo still scanning for them on channel 11.1? Could it be a problem in the Tablo channel guide database?

The digital TV standard allows for a channel to broadcast on one frequency / channel but to show on another (PSIP).

Tablo (and most TVs) show you the identified channel number. So in this case, they are on channel 9 but show as 11.

In my area, I have a channel that broadcasts on 2 but shows 15, another broadcasting on 17 but shows 21.

It can get really confusing which is ironic since the original idea was to help with confusion by moving frequencies but not requiring the general public to learn new station numbers.

This is my current (partial) channel lineup and signal strength reported by my Tablo, below. 11.1 ABC is the culprit. I live about 20 miles north of the tower. My rescan worked perfectly in July when my signal on 11.1 dropped due to the station’s transmitter replacement and frequency repack. They haven’t changed anything since and neither have I. I’ve had the antenna 30’ up in the attic for two years now and it’s worked great. Now, the ONE station I watch most goes “POOF!” overnight. As far as I know there are no new 4-story houses/buildings on that path that went up overnight and no new 2000’ skyscrapers near the 2000’ radio tower 20 miles away.
Ugh!! A new, more sensitive antenna is ordered and on it’s way anyway. 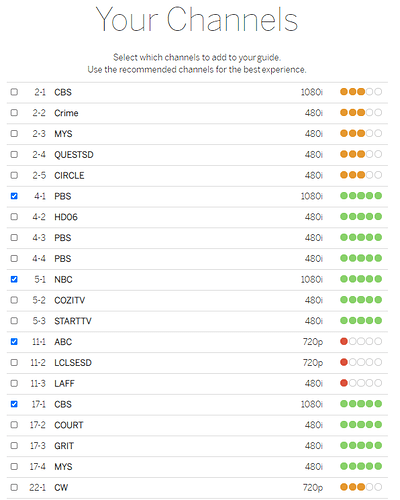 You could also add a simple vhf-only bar antenna to your setup. I had to do that with my setup in a different city, but same problem. One channel moved vhf freqs and I lost it. Who knows why.

Put this one to bed. New VHF/UHF antenna (GE 29884) is in and all channels are solid. Bloody damn hot up there in the attic! ~125f most surfaces and the Tablo was ~145f. Ambient outside is ~90f. Only passive ventilation. That Tablo’s a trooper!
The old antenna was a 50 mile range flat panel type. Wonder if the heat caused it to fail somehow? Weird.

Your Tablo is in the attic exposed to extreme heat in the summer and extreme cold in the winter?

This will likely cause your Tablo to prematurely die. See link below, the Tablo shouldn’t operate above 95 F.

So your tablo and it’s drive is IN THE ATTIC and nobody can understand why suddenly things aren’t working right?

As @theuser86 points out - this is not even close to a good idea and will likely lead to premature death if not future headaches.

I accept the risk. I don’t have any easy way to run a cable out of the attic. Yes, people do it every day, but it hasn’t become a top-of-mind honey-do for me yet. It’s been running just fine up there for 5 years come September. At this point when it fails… it’s time for an upgrade anyway. With the new antenna, I have all my channels back and life is good.