Is there a way to boost the sensitivity for the Tablo scan? My Toshiba TV picks up several more channels on scan than the Tablo does and they play well with strong signal strength. Same exterior antenna pointed the same way - just switch the coax from one to the other. Tablo should be able to find them as well if Toshiba can.

And a second similar question - Is there a way to manually add additional channels to the scan list as my Toshiba TV does? My external antenna has a rotor. Tablo won’t pick up some channels on scan until antenna is pointed that way. Don’t want to have to rescan every time I rotate the antenna and want to receive a station in a different direction. The station needs to already be in the list.

You might try setting the antenna halfway between stations. If the receive bandwidth of the antenna is wide enough the Tablo might record more stations, even if some were initially “in the red” after the scan. Those should then become clear when the antenna is properly aligned.

Can’t promise results, but no harm in trying.

I don’t know of any way to manually add channels or increase tuner sensitivity without external amplifier.

@El_G - The way to ensure you get the channels you expect to receive during a Tablo scan is to improve your antenna and antenna positioning.

Tablo cannot function with a rotor - it must have access to all of the channels at all times. Customers who live in between two towers have used two different directional antennas with a combiner with success.

I would recommend reading this article for more information:
https://www.tablotv.com/blog/getting-technical-over-air-tv-reception/

Thanks for the suggestions, but already have an external amplifier and as I mentioned, a quite good external antenna. Most of the channels I’m trying to tune in New Orleans are almost exactly the same compass setting from here in Biloxi. The one that I might use the rotor for is in Mobile - almost exactly 180 degrees in the opposite direction. With the antenna pointed toward N.O., the Toshiba TV identifies several N.O. stations on scan, but tunes just one (WWL) with good signal strength and good picture. It also tunes the one 180 degrees opposite in Mobile (WKRG) without turning turning the antenna, also with good signal strength and picture. All I’m saying is that the Tablo should be at least as good as the Toshiba.

Good article. Thanks. See my response to Wolfpack for additional information.

BTW, the N.O. stations are at a heading of 237 +/- degrees and 70 to 75 miles according to Antenna Point. The ones the Toshiba picks up on scan are all approx 1000 kw, but only WWL actually tunes showing 3 - 4 of 5 bars on the Toshiba signal strength display. WKRG in Mobile also 1000 kw is about 70 miles to the east at a heading of approx 79 +/- degrees ((158 degrees opposite - not quite the 180 I previously mentioned). Nevertheless, the Toshiba tunes it well without turning the antenna. Unfortunately Tablo cannot even find either of these just swapping the coax from the TV to the Tablo. Thoughts?

You might try a booster/splitter right at your TV/Tablo interface. Not so many bucks to risk. 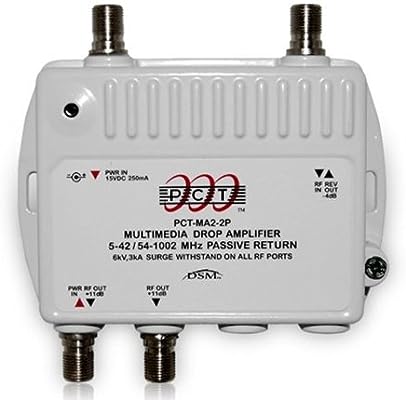 Good suggestion. I ordered one. Had already tried an additional in-line amplifier at the TV end when I was just working with the TV - antenna combination, but really couldn’t tell much difference. (The antenna has it’s own amplifier.) Hadn’t tried that with the Tablo yet. Thanks.