What is the procedure to change to a brand new drive? I am having terrible buffering issues watching live TV so as a last ditch effort I have ordered a brand new drive that is one of the recommended drives on the website. I do not care about saving old recordings. Is it best to just do a factory reset and start all over?

I doubt the drive is causing your problems, unless you actually have a bad drive.

What firmware is on your Tablo?

Disconnect the HDD, reboot your Tablo, then watch Live TV. You can watch live TV without an HDD.

Have you checked the antenna position? Do you channels come in green when you do a channel scan?

There are numerous posts about a slow hard drive causing live tv stream issues. All channels are coming in clear as a bell

Also, don’t overlook the possibility of cell phone interference. More than a few of us have had those issues, especially with indoor antennas in urban and suburban locátions.

OK Homer 3D, I re-scanned the channels and the one channel had indeed changed from Green to yellow and I re-positioned the antennae and it started streaming live TV without the buffering.

Glad that worked out for you. I had a lot of buffering issues when I set the antenna up by eyeballing it. Channels came in green but slowing dropped to yellow then red. After having to “move it” 3 times I got the exact coordinates from TVFool and set it using the compass on my iPhone. So far my channels have stayed green.

Spoke too soon … It started buffering again today even though the channel has full green showing as reception strength.

Go to TVFool and check your address to get the exact compass degrees. All the channels I want were 138-140 degrees. I kid you not, eyeballing it I was at 145 degrees but that 5 degrees made a world of difference with 2 of my channels. Using my iPhone’s compass, I repositioned my antenna to exactly 140 degrees and have had a much better experience. I do not get any buffering when watching on my laptop using chrome but I do get occasional buffering when watching on my FireTV (wired). But that lasts maybe a couple of seconds and it doesn’t happen again until maybe days later. And that’s only a couple seconds of the spinning blue circle. No frame drops, no signal lost.

OK I checked TV Fool I am only between 6.0 and 8.0 miles away from the 4 main network channels and they are all with a degree of the same compass heading. I shouldn’t be having any problems 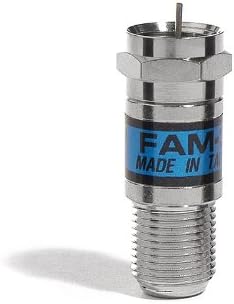 The FAM-3 in-line attenuator can be inserted to coaxial cable feeds to reduce signal levels. Combinations of attenuators may be used together to create the exact signal loss needed.

If it continues I may try that.