Anyone tried to get CEC working to control volume and power on their connected Dolby Audio capable receiver and television?

Using the Power button on the Tablo remote causes the receiver and television to turn off/go into standby, but they immediately turn back on. (Because the TabloTV never actually turns off, and the equipment in standby detects it is on, and they turn on?)

Same effect with the mute button on the Tablo remote - I see the mute indicator show on the receiver but it immediately unmutes.

Maybe the TabloTV needs to turn off its HDMI output when the power button on its remote is pressed?
,
Under the CEC Control settings on the TabloTV I have all three of CEC Switch, Wake with Tablo, and TV Off with Tablo enabled.

Here is a second scenario that I cannot get working.

I removed the audio receiver and connected the TabloTV directly to my TV, using the TV’s speakers for audio output.

Not all TVs handle CEC as well as others. We have some additional guidance here:

The remote included with TV-connected Tablo DVRs like Tablo DUAL HDMI can interact with select televisions that support something called CEC (Consumer Electronics Control).     When CEC is enabled...

That being said, for your first issue with audio can you check that:

For the second issue with waking the TV… You’re sure you have ‘wake with Tablo’ enabled? 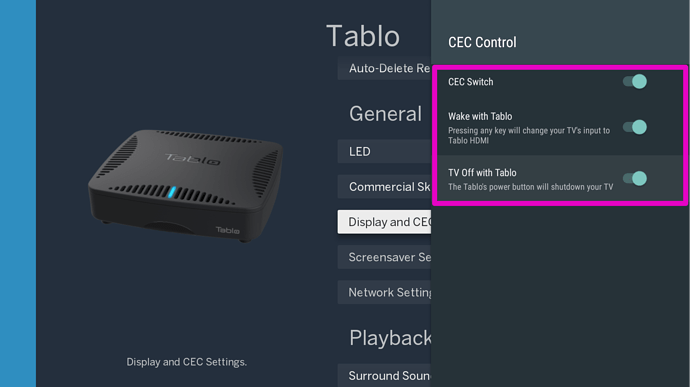 If so, some TVs have an eco feature to completely shut off the TV when powered down.

You may need to adjust that setting to ‘warm standby’ so that the TV will still respond to CEC commands.