Seems like CBS has a weak signal for the last couple of weeks. Very intermittent. Have had OTA over a year now and this is the first time a network has gone out. Getting ABC good which also broadcasts from Mt. Soledad, so don’t see what the problem is… Am 5 miles away, and can see the towers from my backyard. All the Mt. Hope stations are fine. 19 channels in all, only CBS 8-1,2, and 3 are messed up. Trying to contact them but haven’t found a good link yet.

Some here said that Tablo can’t handle “too strong” signals. If you have an amp or pre-amp on the antenan, try to bypass that just to see what happens.

I live 11.5 mile from 8/10. They are both hi-vhf broadcasting from the same location. I haven’t had any problems with 8. It’s usually 10 that at times gets flaky - which probably is military ops that are in my LOS.

But if you run the coax straight into the TV you might notice that the TV signal meter seems pegged at 100% for 8. The engineering e-mail address is on their WEB page.

Here is an article some may find interesting.

In the past I have read the digital cliff was around -65db, but from this chart that value seems to apply to low VHS channels. It suggests signal strengths in the UHF range could drop to as low as -80db or so and still be watchable. Kinda reduces the need for amplification in strong signal areas. 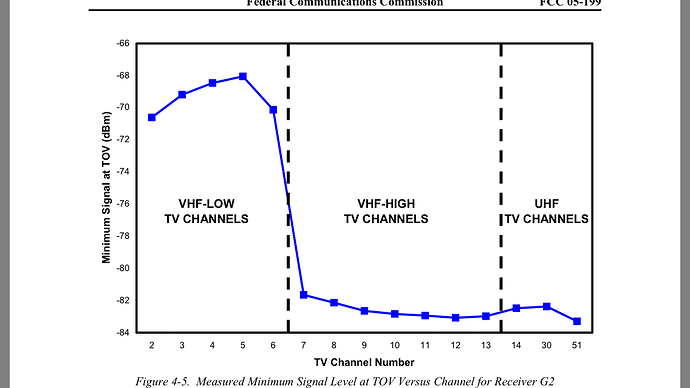 If you are only interested in the English channels, they are broadcast out of only 2 locations If you think and have TV signal meter information suggesting that the channel 8/10 signal is saturated, the solution seems relatively simple to test.

Rotate the antenna 5-10 degrees more toward Mt. San Miguel - which is in a different direction.

No amp. Now it is completely out. Get"weak signal" error and then Tablo has to reconnect. Seems like a streaming or wifi issue, but only for that station.

CBS is not a weak signal - check the effective power on tvfool.com. Especially if you are only 5 miles away. Antenna doesn’t support hi-vhf?

Maybe some kind of signal interference or the antenna is not properly aligned.

Well do I feel silly. Refused to think that moving the antenna a foot to the right would make a difference since it had been in place for 16 mos. without an issue. But now everything is normal. Was suspicious when power company put up marker balls on the power lines which is directly in line of sight, and that’s when CBS went out. For whatever reason, antenna Re position did the trick. Thanks guys for the suggestions.

I noticed the same thing about the CBS signal being a little sketchy at times over the last month or two as well. I’ll follow suit and play with the antenna placement a bit and see if it gets better for me too.

If someone is 5 miles away from the Mt. Soledad, with Line Of Sight(LOS), a decent (non super cheapo) antenna that supports hi-vhf, and no obstructions, pointed off path to also pickup Mt. San Miguel, should not be having a weak signal with either channel 8 or 10.

I’m 12.5 miles away and the signal crosses Mira Mar flight path. Today for a directly connect to TV sky 60 antenna, 30 degrees off Mt. Soledad on a first floor shows, channel 8 at 100% and channel 10 at 86% of maximum strength.

That’s why God invented a TVFOOL report that includes degrees and Boy Scouts that own a compass.