So was watching some sports programs recently (re-watched super bowl, and a couple baseball games) all recorded from different channels. When I pause and exit, it holds the “resume” point fine until I have watched over 2 hours 45 minutes. After that, when I pause and exit, it fails to hold the restart point and I have to start over at the beginning.

Is this expected behavior?

It’s likely a bug. I just tried it with Chrome on my Win10 PC, and I am experiencing the same thing (tried it with the Super Bowl).

Since most recording are nowhere near that long, there may be a default time (like 2:45) where resumes stop working.

I recently recorded the 10 Commandments while the Tablo was on build 2.2.13. I fast-forwarded to 4 hours into the show, then stopped and exited the Tablo app. When I restarted the app the program resumed properly at the 4-hour mark. The media device is a Roku 4. 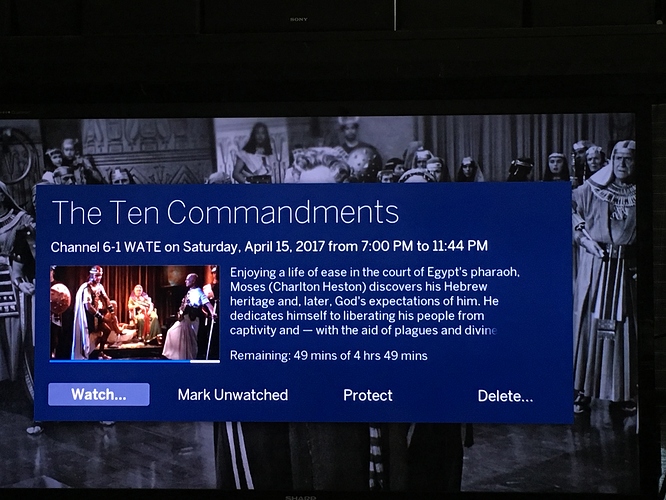 This sounds like the bug I reported over a year ago.

If you have “extend live recording” turned on once the recording reaches the extend time the resume capability is disabled.

The same holds true for already completed recordings. Once your playback enters the extend time and you pause/stop playback can only start from the beginning.

After a year and it wasn’t fixed I finally just started to either completely finish watching the recording or remembering where I left off so I could fast forward.

Sounds like the ‘extended time’ bug is probably it. I was thinking I was losing my mind when it seemed to vary between 2:15 and 2:45, but that makes sense if it is this. I would have to do serious research to see how long the games were originally scheduled, and I simply won’t be that interested…

The issue is probably not limited to the “Extend Live Recording” option.

If you schedule to record a 30 minute non-live episode, the actual amount of time of the recording is 35 minutes. On playback if you view past 30 minutes but before 35 minutes and you pause the recording I think you can only start from the beginning.

It’s just a much bigger problem for sports events.