Anyone have trouble with Heros Reborn? I haven’t had any problems finding shows to record except that one. It doesn’t show it. I looked at the new shows and it isn’t listed, so I tried looking at all shows and it still isn’t listed. Other shows on that same channel record just fine. Any ideas why I can’t see that show? 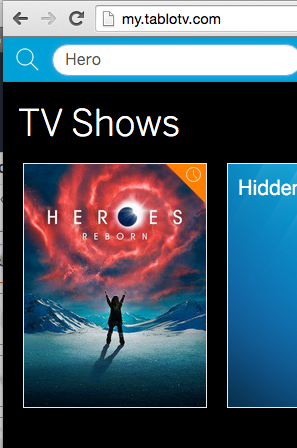 Are you looking in PrimeTime or in TV Shows?

I had no issues… I was able to schedule, record, watch and delete with no problem. Tablo should continue to record new episodes on it’s own.

Try refreshing your schedule through settings. It’s possible your Tablo isn’t updating, and that would explain why it isn’t showing up.

Thanks Everyone. I ended up unplugging the Tablo and plugging it back in. Seems to be working now. Luckily NBC allows you to watch them online so I watched the first episode last night.