Can't connect more than one device off network

Were other tuners in use at the time of your test recording or watching live TV? These would take priority.

4 tuner unit, no other devices connected, no recordings taken place. I’ve had the unit for approx 1 month and Sunday was the first time we’ve had reason to try 2 devices off home network simultaneously. Been trouble shooting since then, connecting a second device off home network always disconnects one already streaming.

You have a HDD connected to the Tablo right?

@bandtab - Sorry to rain on your football parade but Tablo Connect is limited to 1 concurrent session unless you have your Tablo Connect setting at ‘Full Quality’. Plus, most internet upload speeds just can’t handle two sessions at once.

Thanks for clarifying - but that’s not what your documentation on the knowledge base states. I quoted above that indicated 2 streams via Tablo Connect at a lower bitrate than FQ would work with a Dual tuner model.

If someone has say 10 Mbps upload speed, then doing 2 devices at 1 Mbps is definitely possible. Maybe changing this feature would be a good idea?

What is your Internet’s upload speed?

Thanks for clarifying - but that’s not what your documentation on the knowledge base states.

Yeah - I actually didn’t know this until the engineers told me today. We’ll be making that edit.

My Tablo’s recording quality is 720p 3 Mbps. And this is the upload bandwidth speed / usage when streaming remotely at Full Quality on my Interent that is 10 Mbpps upload. You’ll see the peak is around 7.5 Mbps. So you’ll need a fast internet upload speed to stream at FQ on more than 1 device. 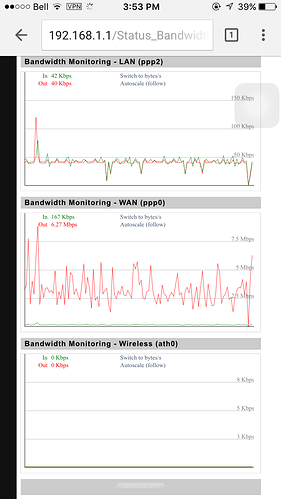 Thanks for clarifying - but that’s not what your documentation on the knowledge base states.

Exactly. A 4-tuner unit serves me no better than a 2-tuner unit then. $80 spent for no additional benefit. Thanks a lot.

So then you can’t stream remotely at Full Quality then. You could get faster internet?

So you’ll need a fast internet upload speed to stream at FQ on more than 1 device.

You could get faster internet?

The Tablo is located at my parents’ house in a semi-rural area in WI (as I live in another state) so the higher speed internet is just not available there.
@theuser86 Thanks for the help.

Ah boo - how is the video quality streaming at 500 Kbps though? Is it watchable?

But for now, at least you can stream remotely to one device at 2 Mbps or 3 Mbps setting.

I had only set it to 500 Kbps during my trouble shooting, thinking that lower quality would help solve the problem. It wasn’t very watchable. At 1.5 Mbps I get a very watchable picture, even on a 42" tv through a FireTV. At 2Mbps the stream starts to stutter.