Can I save bandwidth by splitting signal?

I am using an attic antenna > preamp > splitter. One leg of the splitter feeds my Tablo Quad, the other feeds my TV directly. My cable upload speed is around 10 Mbps. Am I correct in assuming I can improve my chances of not getting buffering while using the highest quality setting for Tablo recording if I use the direct TV connection to watch one live TV channel while recording another channel on Tablo?

If you use the direct connection to your TV and watch a show via your TV it will never buffer!

If you watch a show while recording a show, it’s very unlikely the recording it causing the buffering on the watching.

The fact you are watching live TV via a direct feed to the TV shouldn’t have anything to do with the buffering, assuming the quality of the signal on the side of the split going to the Tablo is sufficient.

Watching live TV using your TV’s tuner (direct coaxial cable connection from antenna to your TV), does not use the Tablo and has no effect on the recording or the future playback of said completed recording.

If you get buffering issues with playback of recordings then the issue is your WiFi network strength and speed. When you playback a recording from the Tablo the stream goes from the Tablo to your router, then from your router to the playback device (say Roku). So if the WiFi connection between your Roku and router is poor this causes buffering. Also you didn’t mention if your Tablo is connected to your router via Ethernet cable or WiFi.

My cable upload speed is around 10 Mbps

Note: if this is in reference to your internet connectivity - it has no impact on local viewing! and is otherwise irrelevant to buffering issues.

Here’s some of what tablo has about buffering:

In general, buffering is usually caused by a slowdown in device-to-device communication on your home WiFi network.  This can be the case even if you have a 'fast' internet package from your interne... 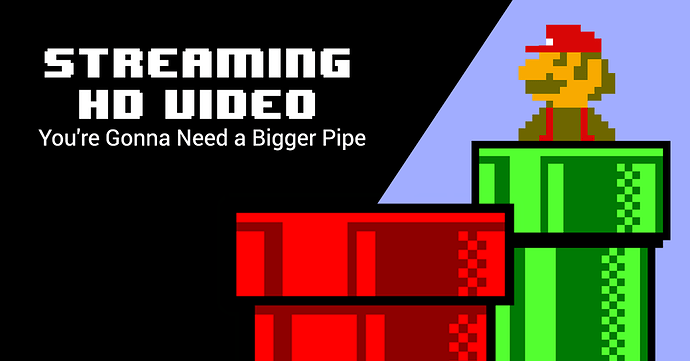 Thanks for your inputs. I guess I wasn’t clear in my question. I meant, rather than watching live TV via Tablo and also recording another program via Tablo at the same time, would I be less likely to get buffering if I watched the live TV direct from the antenna. But by drawing a picture for my addled brain I realize that, in either case, I could have no more than one channel transmitted to the TV at any time via WiFi, so exceeding the WiFi’s upload speed shouldn’t be a problem (assuming all the other WiFi components in the house are off or using another WiFi channel). If I keep the TV connection on 5 GHz and all other components on 2.4 GHz I shouldn’t get signal interruption using Tablo’s maximum quality setting and with 10 Mbps upload speed. Or, am I still missing some relevant facts?

When you watch TV with the antenna connected directly to your TV it is not using your network and thus not streaming so you will never get buffering.

Your ISP modem and router could be powered off and you still can watch TV with the antenna connected directly to your TV.

I understand. So, my only concern would be how capable and fast my wifi unit is in getting the antenna signal to the TV? Why, then, does Tablo recommend using a lower resolution of 720P to avoid buffering if it is processing only the antenna signal and the router/wifi unit upload speed is irrelevant? Does Tablo or the router/wifi hardware limit the internal data stream speed? And how would I measure that besides trial and error? I’m not being argumentative here, but I’m really curious. BTW, I appreciate the time you’re taking to get through to me.

So, my only concern would be how capable and fast my wifi unit is in getting the antenna signal to the TV?

So with this you’re talking about watching live TV through Tablo/streaming device, to your TV, correct?

I believe you’re mixing recording quality/resolution with networking - have you read this: 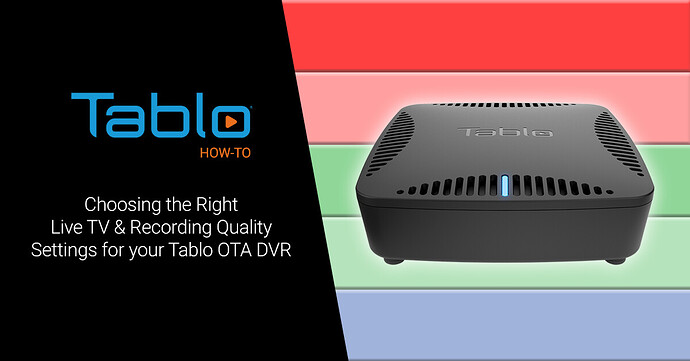 These settings now let you independently define the maximum video resolution (SD 480, HD 720, or HD 1080) and bit rate (2 – 10 Mbps) at which your Tablo OTA DVR transcodes your live TV streams and your recording streams

These do impact how much network bandwidth is in use… but it’s not a direct “number”. Network speed is based on topology and connectivity interdependent of data transmission (more or less).

I think what we are trying to say is you initially mentioned a splitter and one split going to the Tablo, the other directly to your TV. The split going directly to the TV doesn’t affect the Tablo side of things at all, unless by mere existence of the split the antenna signal going into your Tablo isn’t optimal. I bring this up because that can manifest itself in many ways like failed recordings, reboots, etc.

I think one thing most people would recommend, if possible, is to have your Tablo connected via Ethernet to your router/switch. Many people connect it via WiFi with no issues but it’s something to think about.

Thanks, Nilex. So far no problems with my setup, although I haven’t yet checked it out over a significant time period yet. When I’m not watching TV live through the direct antenna connection, I prefer to watch live and recorded TV through my Roku Tablo app that has better functionality than the native Tablo app on my Samsung Q70R TV. But the Roku Premier operates exclusively on the 2.4 GHz band. I think my wifi can hand the high resolution Tablo settings as long as I assign all of our other wifi components to the 5 GHz band. Time will tell. Unfortunately, I don’t have the option of using an Ethernet connection.

Yup. Gonna give the max video resolution a try and see what happens. See my answer to Nilex.

But the Roku Premier operates exclusively on the 2.4 GHz band.

What is the model number of your Roku Premiere? The newest Premiere model is only Wireless N 2.4 GHz and can be fast enough for higher resolution recordings on the Tablo provided the Roku is close enough to the router (this is the device that provides WiFi signal and thus the WiFi network).

I have the 2.4 GHz IR version. Good signal strength at the Roku.

Right, dk. I had read this and I understand. I think what I’ll do is just record at 1080 and attempt playback to my TV’s Tablo app on the 5 GHz wifi band at 1080 and see what happens. I prefer Roku’s Tablo app to Samsung’s native app because of better functionality, but my Tablo is 2.4 GHz and my TV will receive 5 GHz. My Samsung TV is 82", so resolution is a consideration and I’ll just have to experiment.