Looking for a thread detailing known working drives, I came across the existing thread that is aimed at USB drives.

I want to try using the SATA support in a QUAD with something like a Firecuda 2TB SSHD or maybe a WD Black 1TB 7200rpm (model WD10SPSX) to get best speed balance for reads & writes. Is there a reason that many use the USB drives, perhaps? Total newbie to Tablo here…

I am not a hoarder, so larger drives likely won’t benefit me much. 2TB or maybe even 1TB seems right-sized.

I did see the suggestion about putting my Tablo on top of a tablet fan (x3 or better) to avoid heat probs.

Tablo usb is 2.0 so 7200 is total overkill and waste. I have been using the same seagate 2TB portable drive with both on a laptop cooler for over 5 years.

The original Tablo only used USB drives. Which is why you see only USB drives in the working drive thread. When I bought the Quad I reused the USB drive from a 2-tuner table about 5 years old now. I took the 2TB drive out of the USB case (ST20000LM003-HM). Take note of the drive height. Last I checked anything over 2TB would not fit in the Quad, but I am sure that will change. I have my tablos on a vented shelf in the basement it keeps things pretty cool year round. I have had no problems. I did do a full badblocks read/write test while waiting in the Quad to arrive just to be safe no defects found

I have seen 2TB USB Seagate for $60.00 US, sometimes cheaper than bare drives.

I am aware of the limitations and the specs, but since I am buying a QUAD the SATA drive isn’t using USB (2.0)at all, and for some reason right now the Firecuda SSHD 2TB drive is $59 while the non accelerated Barracuda 2TB is $80. A WD Black 1TB is $65. I already have an Aircom T8 cooler so adding an Airplate is $15.

The WD model you listed above (WD10SPSX) is actually WD Blue, not WD Black. The WD Blue 2.5” HDDs and Seagate Barracuda 2.5” HDDs only come with 2 year warranty.

All of these are 7mm height drives, so easy fit. Actually I don’t see any 9.5mm drives, most 2 platter drives are 15mm which obviously won’t fit.

Yep! I just did. It is out of stock until Friday (27th) but I will be out of town next week until the 26th. It’s my birthday today, so I am treating myself to a few toys.

Hopefully they ship at that price, because if you look inside the dropdown box the 1TB Firecuda is the same price (but in stock).

FWIW the 2TB standard Barracuda is back down to $49.99 today, and both the Seagate and WD Elements 2TB USB 3.0 drives are available for $59.99 (not the same Seagate model number mentioned above, but the STGX2000-400, which I think is a newer model or version).

FWIW the 2TB standard Barracuda is back down to $49.99

Then buy that lol no need for SSHD.

Yeah, I didn’t notice that the price was down until I had ordered the Firecuda drive. $10 ain’t gonna make much difference and if I repurposed it later I will be better off with the accelerated drive. They claim 5x faster reads, but my observation is that it is more likely 2x to 3x average depending on whether linear or random reads. Recorded HDTV should mostly be linear, but the algorithms sometimes hack up what should be contiguous extents.

I have a 1TB 2.5" Firecuda as a work drive in my mini tower. It isn’t the boot drive, but most things are noticeably faster since it is the swap drive also.

The Barracuda is more than fast enough for the Tablo.

It’s Amazon, can’t you cancel the order before it’s shipped?

Probably could, but as I noted I would rather have the SSHD for future use, plus I have had issues more than once when an invoice disappeared from Amazon.com after they had charged my credit card. Not supposed to happen - according to their stated policy - but believe me, it does.

My first HDD for my Tablo Quad was a 2T Firecuda, and I could never get it to work. It’s now the extra drive in the computer.

I then bought a 2T Barracuda, which also initially did not work, but after using the phone version of the Tablo app instead of the web version, it formatted and is now happy. The drive is plenty fast and very huge.

I can’t say the Firecuda won’t work, but I did have troubles.

We will see in the morning. I got my Tablo Quad along with the AC Infinity Airplate S4 (140mm) fan and temperature probe / control set before Christmas, but the Firecuda 2TB 2.5" SSHD was delayed and arrives tomorrow morning by UPS. I suspect that it will work, but I guess you never know until you put the pedal to the metal as they say. I will follow up here with the results.

I think that the cooling solution is optimal for the Quad, since the fan will only run when needed and it is speed adjustable by temperature, so I am trading quiet (silence) only when it is actually needed, but I can adjust how fast the fan runs by temperature reading from the probe. The fan & probe + controller just plug into the otherwise vacant USB port, since I will be using an internal SATA drive.

I have two spare 1TB drives salvaged from old laptops, so I can make do if need be until I get a 2TB 2.5" drive that works if necessary. I guess I will try the WD Blue drive next, and it seems to be universally liked here.

How does the probe detect the temperature? Just ambient temperature outside the Tablo?

Well, I have not played with it yet, but it is very flexible and reads 100 times per second as I recall, so getting it as close as possible to the tuners should give me decent results. I got the simple $16 solution and not the fancy $40 LCD panel display because it is just a super simple installation.

I have an AC Infinity Aircom S8 (I think - maybe “T8”?) with the fancy LCD to keep my Marantz SR7012 cool, and I really love it! It is the one with dual rear exhaust 140mm “ultra silent” fans. It is a perfect solution for that AVR since it is driving 8 of 9 (x 150 watt) power amps and I drive my LCR with a Emotiva BasX A500 (I have two AMT super-tweeters set up as second front pair with A&B always on). It runs a bit hot when I have a true Atmos running in 9.2.4 mode.

Here are two pix from the Amazon listing. I have it sitting right here, but I take the worst pictures of anyone I know… 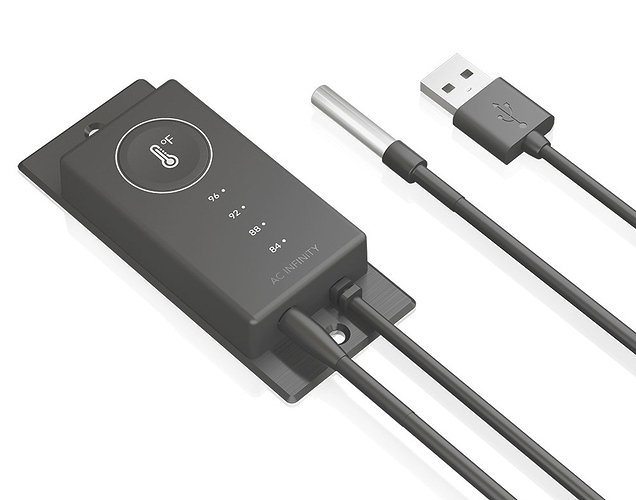 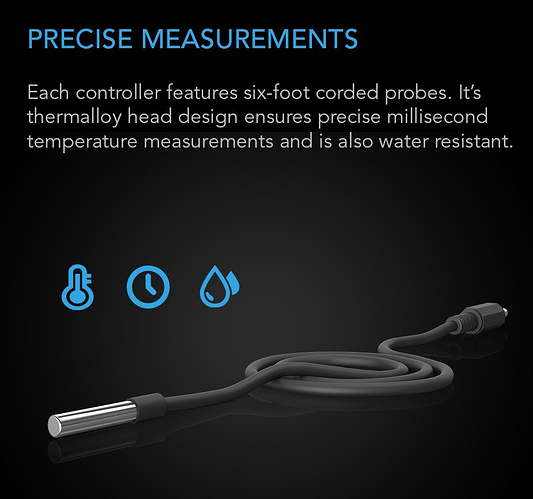 My report is pretty boring: plugged in my Firecuda 2TB (ST2000LX001) 2.5" SATA3 6GB drive and formatted it and everything is working perfectly. I just ran through and setup recurring recording for most of our usual shows and added a bunch we couldn’t watch with only a single tuner, used the default quality for recordings and bumped up Live to max (10 @ 1080 instead of 5 @ 720) and so far not a single glitch. I will keep an eye (or two) on it for the time being and report anything unusual.

I added the temperature probe and set temp to engage at 82°F and it runs once in a while, but not often. Of course it’s the cool time of the year for now…

So far it is flawless… 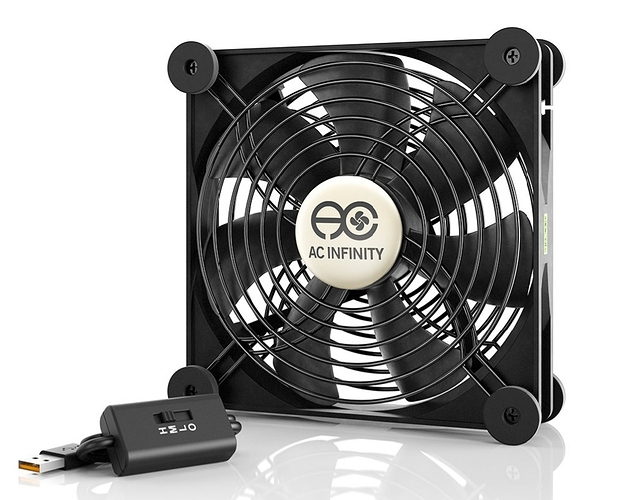 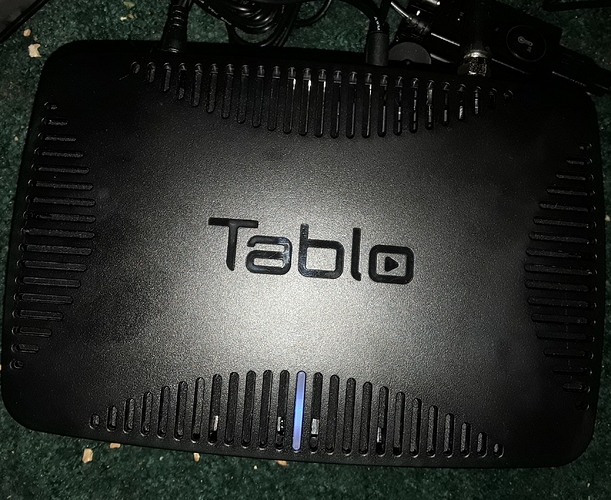 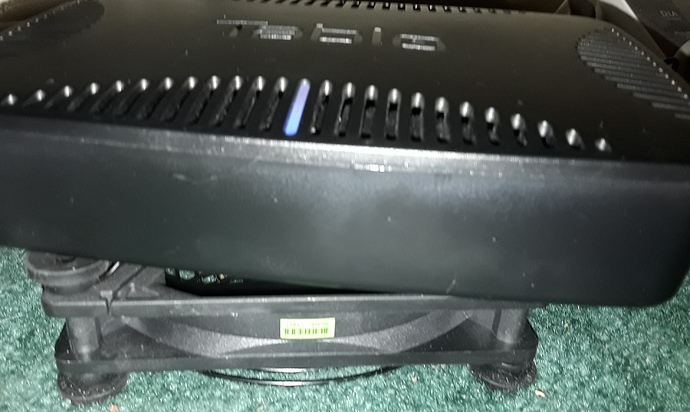 The 140mm fan is truly right-sized for the job, but remember I replaced the basic / standard Hi/Med/Low/Off switch shown in the 1st pix with the temp probe shown above set to the minimum activation temperature and it works perfectly - “like a charm” as they say. Fan is $14, temp controller add-on was $16. It plugs into the USB port on the Quad and I put the probe inside the cage between the SATA drive bay and the 4 tuners.