I’m using the Tablo app on my Roku.  For the most part, channels come in great, except for a couple, where my recordings are straight gibberish.  I’ve decided to try and move the antenna around the apartment, to see if I can get a better signal for all of my channels.  Once I do, will I have to rescan the channels, and uninstall/reinstall the Roku app?  Do I have to do this every time I move the antenna, during my testing?

@zenzi - Once you’ve moved the antenna, hit rescan and see if you get a better result. You can either accept this new channel lineup or scan again.

You won’t have to do anything with your Roku.
This blog post might be helpful as well: https://www.tablotv.com/blog/position-matters-hdtv-antenna-placement/
Hope you don’t wind up like Beetle Bailey though

LOL!  Thanks for the blog post.  Fortunately, I won’t have to pull a Beetle Bailey, since my antenna is indoors.

Ultimatley I ended up getting a cheap refirb HDHomeRun DUAL off ebay and used a smartphone app that talks to the HD Homerun to display in realtime channel signal strength. (https://itunes.apple.com/us/app/signal-gh/id289580769?mt=8) (I know there is a similar like app for android but I dont use android so I dont have the link)… These two things were the best way I could figure out which way to point my antenna then check the channel strength in realtime to see if I got it right… I would have to say getting the right antenna and getting it oriented correctly (and testing between attic mount / outdoor mount) was the hardest and most time consuming aspect to all of this … Granted I live 40+ miles away from our “local” TV transmitter cluster…   (espcially if you are up on a roof trying to do this … its not easy to try to do a “Channel scan” and see if you got it right… that way can take hours)

This said … sometime in the distant future it would be nice if the TABLO had a similar utility built in to do this as it would really cut down on the frustration level for those of us who live far away or in less than ideal reception areas where we can just stick a Mohu leaf on any wall and call it a day.

I also used a Homerun and this app on my iPad.

You asked for the best way.

The best way is with a meter to measure bit error rate and modulation error ratio. Here’s a [relatively] inexpensive choice: 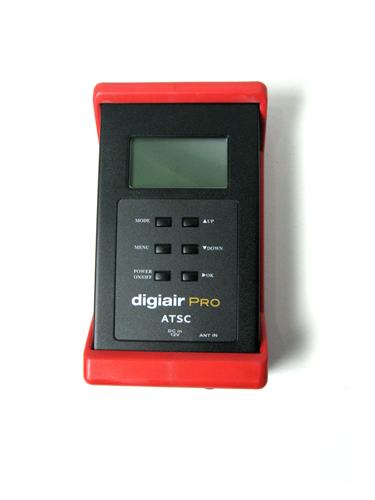 The “problem” with ATSC is you have a great picture until you don’t (the cliff). I read over and over in this forum about how one changed nothing and the weather is great and now channel(s) aren’t coming in. In reality, a minor change in conditions (including a different time of day/year) can take a channel where just enough bits are coming in to error correct to being unwatchable.

It’s best not to operate in the blind.

I realize this might change the cord cutting calculation, but it does save a lot of frustration.

I looked at that meter and $300 was a little out of my budget for a one-time use item… lol… But yea I would have loved to have gotten my mitts on that for a day.

yes thats what I did … see my previous post for iPhone app link.

yes thats what I did .. see my previous post for iPhone app link.

Some of the antenna installers in Ottawa will help you point your antenna for a fee. Might be something to look into as well since they have all the fancy gear :)

Some of the antenna installers in Ottawa will help you point your antenna for a fee. Might be something to look into as well since they have all the fancy gear :)

If I had to do this over again … I think I would do that … since buying the right antenna and the pointing it in the right direction is really super critical if you are not in a strong reception area. (like me who lives 40+ miles out)

After this thread, I investigated and discovered my tv has a way of displaying signal strength.  I found that the two channels that sometimes fail to record were listed at signal strength of 34-40 (out of 100) by the tv, all my other channels were 100/100.  The Tablo gave me 3 orange dots for these two channels, btw.   As I went through the channel list, the tv gave me a “could not decode signal” on one of the channels.  I guess I need a better antenna.

Or get a preamp …

but I would also check your antenna is located in the optimal location, oriented in the right direction (sometimes signals can bounce or reflect off of things so what may seem logical may not be the best direction … this is where it gets frustrating if you don’t have the pro tools to determine this), In my case I had to get a better antenna, imploy a preamp, and realign my antenna into its optimal position (which only was apparent using some crude signal measuring tools)
roraniel December 5, 2014, 1:48pm #16

@HowHardCanItBe - I used the HomeRun and the IOS App several people have posted to adjust the position and direction of my antenna. The reason I preferred this method is because the signal strength is live data, you do not need to adjust the antenna, do a channel scan, adjust, scan, adjust, scan. You can see the signal strength change as your moving the antenna. That made it much easier. It took me less than 30 minutes to get the antenna position optimized.

Once I had the antenna position optimized I still got occasional pixilation on cloudy days. I installed a Preamp and took care of that. One rainy day I got some pixilation so I installed a distribution amp (the Tablo is basically a splitter, 2 tuner splits into 2, 4 tuner splits into 4) There are links below to the Preamp and Amp I used. I used that Amp because it has adjustable gain which was useful if I found the signal is over amplified.
I have zero pixilation now but I am waiting for our first Thunderstorm to see how good it is.
HowHardCanItBe December 7, 2014, 5:27am #17

Thanks for the details and the links too. @roraniel and @ericgus