I live in Miramar, FL. All the towers are only 8 miles away from me. I currently have a clearstream 2V mounted in the attic and able to get all channels properly except the Fox which is a High V. From time to time I get very bad signal. Is adding a clearstream 5v solve this problem? or is there any other suggestions?

I live in Austin, TX and have a station broadcast on channel 7 and two stations broadcast on 13. I got a Winegard FL5500A antenna and put it in my bedroom window. I did have a Mohu Leaf and the channel 13 stations didn’t come in. They are in Kileen, which isn’t with the rest of the antennas. My zip code is 78758 if you want to see my www.tvfool.com report.

I have tested a variety of antennas both indoor and outdoor. I settled on the Eaglestar Pro HDTV Outdoor Antenna. While an outdoor antenna it offers twice the range of the Mohu Sky Antenna.

A friend of mine has seen great reviews of it (Eaglestar). He lives in an apartment and is thinking about buying one. How far are you from the broadcast towers? Do you use the amplified version? Is yours with the VHF attachment (the rod that runs through the middle of it)?

Clearstream 5 is probably the best you can do without going Yagi. Its size is manageable. I built a VHF loop antenna using refrigeration copper coil based on the Clearstream 5 model and it gets me two VHF channels at 100%. So I expect the Clearstream 5 will do similarly for you.

Since the Clearstream 5 is $140, in your situation (8 miles) a simple set of rabbit ears for $10 may do the trick in the attic. Join your UHF to the VHF using a UVSJ (UHF VHF combiner $3). BTW the Antennas Direct VHF Kit (VHF addon component for your antenna - for all Clearstreams in fact) is also a pair of rabbit ears.

Or fashion a $10 folded dipole like this guy did. It’s the upper antenna on top of his UHF one. He used copper pipe but 8 gauge 66" copper wire will do it. No tools necessary - just fold the wire and attach a balun to it (alligator clips will do). 4 bucks for the wire! 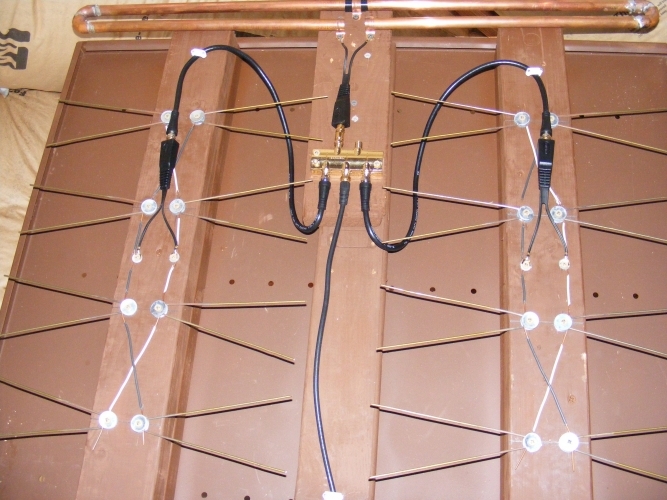 Get a 66" piece of copper 8 or 10 gauge wire. Loop it around a picture frame - on the side to face the wall. About 16" per side making a “square” loop. Staple the wiring to the frame. Attach a balun to it and run the wire from the picture frame into a plant under the picture (hiding the wire that way).

Picture on the wall hides the antenna which is nicely mounted. That’s how I did my FM antenna for radio.

The MCM Stellar Labs Yagi is also a good medium-to-long range VHF antenna for under $30. Fits in an attic.

I live in Vancouver, BC, in a condo 14th floor facing south. The antenna range 150 miles comes with a 20 db amplifier picks up 26 stations, a mix of Canadian and USA from the GVA, Seattle, etc. Basically from channel 2 to 42. I have CBC, Chek, PBS, ABC, Fox, MeTV, AntennaTV, Commet, etc. I used the OTA app to help angle the antenna to get the best reception based for my location. Condo rules in my building don’t allow mounting to the railing so I mounted it to a tripod

Is the tripod outside - like on a balcony? 14th floor, that’s like 120 to 150 feet in the air. My goodness, you’re condo is an antenna tower up in the air! So Seattle comes in good in Vancouver?

Make sure it’s not the Mona Lisa or Whistler’s Mother, Mr. Bean

The fact that you’re so close to the towers and are having issues with only a High-V channel makes me think it may be FM-interference. I’d try an FM-Trap if you haven’t already. If you have a long(ish) cable run to your Tablo, you could try an amplifier with an integrated trap.

Yes I use a tripod with counter weights on each leg. I guess looking at it that way it’s really a high HDTV antenna in the sky. Though I’m sure there are a few people here that live higher in the sky