Any USA vs CA country restrictions on channel search?

I live in the Detroit area, trying to add CBC out of Windsor. Based on some research, I’m 39.7 miles from the transmitter. I have a Mohu Leaf 30, just bought a 50, but CBC does not show up after several rescans with both. I’m trying to make sure that it isn’t blocked somehow (in the channel scan) before digging in further.

When I do the scan, it shows (x/69) at the top. Does that mean based on my location, there are 69 potential transmitters to find? If so, how can I know what those are? Is it even looking for CBC (channel 9) in Windsor? Thanks.

That’s 69 frequencies to scan, not necessarily transmitters. But CBC might not show up if Tablo’s guide provider doesn’t think it’s available in your zip code.

So, can you get it with a TV tuner? If not, you need to get a better antenna. 40 miles is long ways for an indoor flat panel antenna.

If you can get it with a TV, submit a support request to Tablo with the station information and your zip code so they can get it updated with the guide provider.

Thanks so much for the reply. I’ll try the 50 with the TV. Yeah, it’s farther than I figured it would be, we used to be able to get it via rabbit ears in the old days. Have the antenna in an upstairs window facing the correct direction, so figure I’m getting a decent scan. If I can’t get it, are there any other indoor antennas that might be able to? Or will I need to go external. Thanks!

When scanning for channels, the channel will show up even if there is no guide data. The channel shows up in the Live TV grid but all the data/show fields are greyed out.

The only problem I’ve seen on the forum is some user who had a channel that was either not broadcasting PSIP data or the PSIP data was incorrect and thus never appeared on the scan. I’ve had a number of new sub-channels show up on a scan. A ticket needs to be opened to add them to the guide. I usually wait until the channel shows up in titantv. I’ve seen channels appear for 3-4 weeks before the engineers get the OTA adjusted properly.

@tomcarroll59 - I believe the Windsor tower is right on the river across from Joe Louis arena.

It seems that most of the local towers are all in a line but it depends on where you’re at… If you’re south of Ann Arbor there’s a fairly large degree spread and if you’re pointing your antenna towards the center of that spread of towers, the CBC tower will be at the edge.

If you’re East of Pontiac, it would be an ideal spot as the towers are in a tight line. 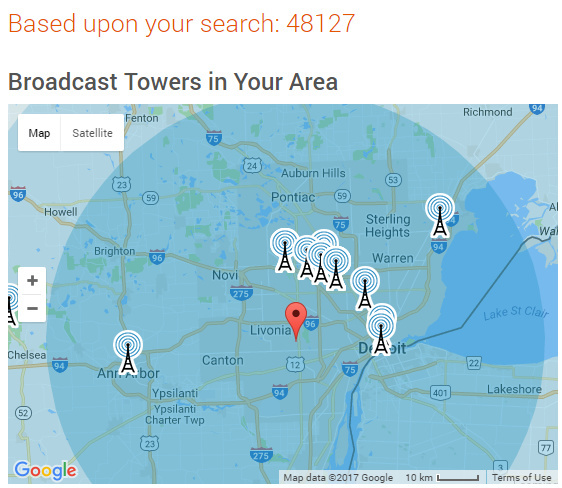 I would concentrate on getting your antenna as high as possible making sure to do a rescan between each tweak you made to the position.

Thanks for the note. I think CBET tower has moved farther out, but in doing some research, it’s still only 25 miles away from 48069, my area code. Tried with both Mohu Leaf 30 and 50 and couldn’t pick it up. So I’ll try another spot in the house or another antenna. Once I can see it on my TV, I’ll see if Tablo can pull it in, and submit a ticket if it can’t. Thanks!

@tomcarroll59 It’s worth looking into whether the CBC channel is VHF. Mohu antennas are not really designed to see these signals well which might explain what you’re seeing.

Awesome, thanks, that might be it. I think it is VHF. Are there other antennas (or manufacturers) that would work better for pulling in VHF stations. Thanks so much, this forum is awesome!

@tomcarroll59 Winegard & Antennas Direct are also big antenna distributors. Just check the packaging/description to make sure they are good for UHF & VHF.

Antennas Direct actually has a 1-800 # for antenna advice. (As does Mohu.)

Winegard FL5500A is VHF and UHF and is what I use in Austin, TX. Available from Amazon and elsewhere